Hull claimed their first win since the opening day as Neil Warnock lost his first league game in charge of his second spell with Crystal Palace. Mo Diame scored his third goal in four games since joining from West Ham heading home Robertson’s delightful cross.  Jelevic sealed the points a minute from full time when he stylishly slotted home from Livermore’s pass.

A last minute free kick from Ross Wallace earned Burnley a valuable point as the Clarets scored their first goals since the opening day. Jeffrey Schlupp opening the scoring for the Foxes when he converted from Mahrez’s cross. Burnley ended a run of five games without scoring when Kightly poked home to before Mahrez back post header restored Leicester’s lead going into the break. It looked like Leicester were going to claim their third win of the season but Wallace had different ideas. His super free kick sent the travelling fans wild to deny Leicester the win.

Liverpool collected their first three points since the end of August with an unconvincing win at home to West Brom. After a sluggish start the Reds took the lead on the stroke of half time, summer signing Adam Lallana finished well after good build up play involving Henderson. The Baggies equalised minutes into the second half. Berahino was bought down by Lovren, replays showed that it was outside the box and the Croatian was unlucky to concede a penalty. The England under 21 star Berahino picked himself up to confidently covert from the spot. It didn’t take the home side long to regain the lead, Henderson coolly slotted home from Sterling’s pass to give Liverpool a very important win.

Sunderland won their first game of the season as a Steven Fletcher double was enough to beat Stoke. Wickham and Fletcher headed home either side of a Charlie Adam goal to give the home side a 2-1 lead at the break. The three points were confirmed with twelve minutes to go as an outstanding run by Connor Wickham was eventually finished by Fletcher for his second of the afternoon much to the relief of the Stadium of Light.

Swansea’s poor league form continued as a Papiss Cisse brace ensured they’re without a league win since the end of August. It was in fact the Swans that took the lead; Bony played a beautiful one-two with Sigurdsson with the Icelandic International sending the Ivorian one v one with Krul who confidently placed it into the bottom corner to open the scoring. The Magpies unexpected equalised on the stroke of half time. Obertan did well to deliver a cross to Cisse who poked home past Fabianski to entirely change Pardew’s half time team talk. The home side retook the lead minutes into the second half; Sigurdsson claimed his second assist playing a lovely through ball to Routledge who exquisitely chipped the ball over Krul to regain Swansea’s lead. Newcastle were finished and levelled the scores once again, Cisse was the man in the right place to tap home after good work from Ameobi.

Manchester City left it late to give them a hugely important three points and continue their fine away league form having picked up ten points away from the Etihad already. Despite the win it was a tremendously frustrating afternoon for City. Dzeko went close a couple of times during the first half as well as Kolarov and Aguero both striking the post either side of half time. It looked as if the spoils were going to be shared until the visitors struck twice in quick succession during the final ten minutes. Firstly Toure and then Aguero both beat Guzan at his near post after two superb finishes to leave Pellegrini a very happy man, they move up to second in the table.

Manchester United made it three wins from their last four games but were enormously thankful for a world class performance from their keeper David De Gea. They took the lead on twenty seven minutes; a Juan Mata pass was swept home by Di Maria, the Argentinian’s third goal for the Reds already. Everton were handed a golden opportunity to get themselves back into the game but Baines’s penalty was brilliantly saved by De Gea, the left backs first ever miss from the spot in the Premier League. They did make it 1-1 just minutes into the second period; Baines made up for his penalty miss with a pinpoint cross that Naismith headed home from. The Toffee’s weren’t level for long as Falcao pounced to score his first goal for the reds, the Columbian a very relieved man after a frustrating start to his Reds career. United were grateful as late on De Gea made tremendous saves to firstly deny Osman and second Oviedo to keep the score at 2-1.

Chelsea continued their fine form with a routine win at home to Arsenal as the Blues made it six wins out of seven and remain at the top of the league. The hosts took the lead midway through the first half, man of the match Hazard’s fine run was upended by Koscienly who conceded a penalty and was extremely lucky not to see red. The Belgium man confidently sent Szczesny the wrong way to give Chelsea the lead. Arsenal couldn’t fashion a shot on target during the ninety minutes after a shocking attacking performance and inform man Diego Costa wonderfully doubled the home side’s lead finishing well after collecting ex Arsenal man Fabregas’s tremendous pass. 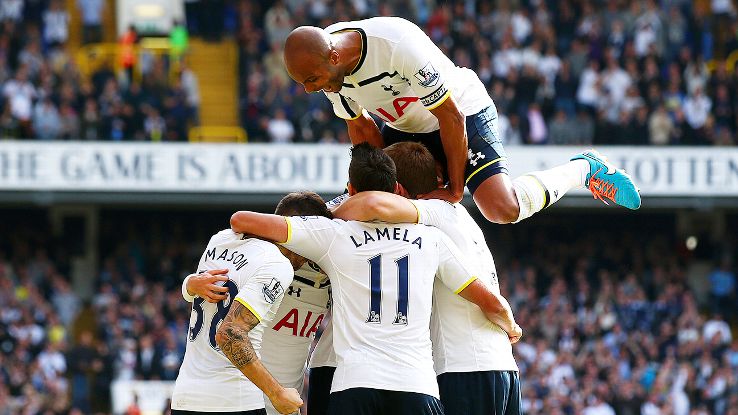 A Christian Eriksen goal was enough to give Tottenham their first home win in four and collect a significant three points against Southampton. A fine move involving Adebayor and Chadli was finished expertly by Eriksen, the Danish International scoring his second goal of the season. The inform Chadli was unlucky not to double Spurs lead when his left footed shot came back off the post. Southampton’s only chance Mane who fluffed his big moment when it seemed easier to score. Spurs defended well late on and held on for a precious three points.

West Ham continued their impressive start to the season with a straight foward win at home to rock bottom Queens Park Rangers who already look in deep trouble with just one win from their opening seven games. The Hammers took the lead early on when Downing’s cross was turned into his own net by the unfortunate Onuoha. The lead was doubled on the hour mark. Sahko was the right man in the right place as he made in 5 goals in as many starts heading home from Tomkins hopeful ball back across.