Fulham lost for the first time in three Premier League games to remain two points below the relegation zone and deep in trouble. Spurs took the lead just after the half hour mark when Eriksen’s superb free kick found Paulinho who was left with the easy task of tapping the ball home from a few yards, the Brazilians first ever goal at White Hart Lane. The whites were level almost immediately when top goal scorer Sidwell found a way through the Spurs defence and confidently slotted home for his eighth goal of the season. Harry Kane restored the home side’s advantages only a couple of minutes after the restart when he glanced in after a cross from the right from Aaron Lennon, the Englishmen’s third goal in as many games. Rodallega’s header was superbly tipped over the bar by Lloris but Fulham’s chances were few and far between in the second period. Kaboul wrapped the game up when he taped in Eriksen’s once again fantastic free kick, the Dane on fine again for Tottenham, making it four goals and five assists in his last five outings. Fulham had a chance to get back in the game late on but Sidwell’s penalty was expertly saved by the outstanding Lloris.

Cardiff fought hard and earned a well-deserved point to stay right in the relegation mix ahead of their six pointer at Sunderland next weekend. Both goals came from the spot, Marko Arnautovic’s penalty opened the scoring for Stoke on the stroke of half time when Odemwingie was brought down by Kim. Minutes after the restart Cardiff was level when Wittingham slotted away from the spot, unbelievably the home side’s first penalty they have received this season. Cardiff had chances to secure all three points when late on when Captain Caulker was twice denied by Begovic. Cardiff threw everything at Stoke looking for the winner and were nearly caught out but the once again impressive Marshall saved well with his legs to deny Odemwinge.

Crystal Palace’s unbelievable season continued when they made it five wins in a row after defeating West Ham at Upton Park to mathematically guarantee their Premier League safety. An understandably emotional Boylen Ground pre kick off with fans uniting in a minute’s applause for West Ham youngster Dylan Tombides after the twenty year old died earlier this week. The key moment in the game came on the hour mark when Palace captain Jedinak coolly drove his penalty into the top corner after Jerome was fouled. Palace are now six points above West Ham with the top half now well in their sights as they’re just one point off tenth placed Stoke.

Newcastle’s woeful run of form goes on as they fell to their fifth straight Premier League defeat and their eighth at home. As for Swansea this three points could be vital in their bid to avoid relegation, the Swans now six points above the drop zone with only three games left to play. It was a Wilfred Bony double that guided the Welsh side to the three points, but it was Newcastle who took the lead, Ameobi’s low finish gave the home side the lead. On the stroke of half time Swansea equalised when Bony’s bullet header left Krul with no chance. The Ivorian won the game in stoppage time when his penalty flew into the top corner for his twenty second goal of the season and sent Swansea manager Gary Monk into ecstasy on the touch line, ending a run of five months without an away Premier League.

Aston Villa edged a point closer to securing their place in the Premier League when them and Southampton played out a boring goalless draw.  Neither side were able to come up with a shot on target during the first period.  The games best chance fell to Lallana; the Englishmen fluffed his lines after good work from Shaw down the left.

Jose Mourinho’s unbeaten home record for Chelsea has finally come to an end after 77 games and ten years. Huge underdogs Sunderland to everyone’s surprise came away from Stamford Bridge with an impressive 2-1 victory. Chelsea were ahead in the early stages when Eto’o was on the end of Willian’s corner to smash home. The bottom club were soon level when Connor Wickham made it three goals in four days when he followed up Alonso’s initial effort. With Chelsea committing men forward to try and win the game were caught out and paid an enormous price, Azpilicueta’s slip allowed in Altidore, the Spaniard fouled the American, former Chelsea man Borini was the coolest man in the stadium side footing down the middle to send the travelling contingent absolutely wild. With home games to come against Cardiff, Swansea and West Brom this leaves the Black Cats in with a real chance of pulling off the great escape.

Liverpool made it eleven wins in a row and left themselves needing two wins from their last three games to guarantee their first Premier League title. They made the perfect start when Sterling’s superb twenty five yard effort flew into the top corner; replays showed that it took a slight deflection. Minutes later Sterling turned provider for Suarez who confidently side footed past the onrushing Ruddy, to score his thirtieth league goal of the season. The home side’s impressive start to the second half was rewarded when Mignolet dropped a cross and Hooper was on hand to reduce the Reds lead. It wasn’t long before Liverpool restored their two goal advantage, Sterling’s run and deflected effort looped over Ruddy. Norwich refused to lie down and again cut the deficit to one once again when Snodgrass headed in after Olsson’s perfect cross. The Canaries couldn’t find the third and Liverpool extended their gap at the top to five points.

An inspired Aaron Ramsey, starting his first Premier League game since Boxing Day led Arsenal to their first away win in over a month. The Welshman’s two assists and goal was enough to earn the three points and the man of the match award for himself. Ramsey opened the scoring after he finished off a fine move which saw Ozil find Cazorla and the Spaniard superbly found Ramsey who confidently slotted away. Despite Hull dominating the early stages they couldn’t create any real chances and fell further behind when Podolski smashed in following Ramsey’s lay off, Hull were furious as they thought Jelevic was fouled but referee Moss ignored Hull’s appeals and the goal stood. The second goal really kicked the stuffing out of Hull and never really looked like getting back into the contest. Ten minutes into the second half Arsenal scored their third and secured the points, Podolski swept home after Ramsey’s original effort was saved by Harper.

Everton kept up their hunt for a Champions League spot when they swept aside Manchester United at Goodison to ensure David Moyes return was an unhappy one, proving to be the Scotsman’s last game in charge of the club. Despite the away side having large amounts of possession they never really created any clear cut chances and fell behind when Baines scored from the spot after Lukaku’s shot hit Jones hand. Everton doubled their lead on the stroke of half time when the once again the impressive Coleman who had been causing United several problems found Mirallas who squeezed his shot past De Gea from a tight angle. This was Everton’s first doubled of the Red Devils since 1969, the hosts only now one point behind Arsenal in fifth place and are well in the running for a top four finish.

Manchester City closed the gap on leaders Liverpool to six points with a straight forward victory at the Etihad against strugglers West Brom. City got off to the perfect start when Zabaleta’s header found the back of the net after Aguero’s pile driver was palmed away by Foster into the Argentinian’s path. Minutes later again got himself on the score sheet when his swerving low effort left Foster with no chance. Dorrans got West Brom back in the game with a sublime piece of skill and thunderous left foot finish leaving Hart with no chance punishing City after there was a mix-up with a free kick at the other end. Despite the Baggies gaining some confidence from this goal City killed the game off when Demichelis swept home after Kompany flicked on Nasri’s corner. 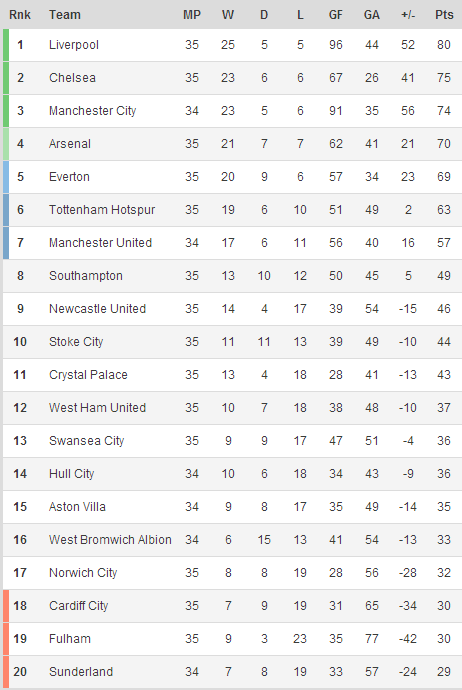