Palace made it 3 wins in a row to all but confirm their Premier League safety whilst Villa’s miserable form continues. A game of few chances with the first falling to Villa when Jerome cleared Clark’s header of the line, minutes later Jerome hit the cross bar himself. Meanwhile referee Howard Webb looked to award Palace a penalty only to change his decision. Villa, a team that have lost their last three never really looked like threatening the Palace goal are in real danger of playing Championship football next season if they don’t start to pick up points rapidly. The winning goal came fourteen minutes from time, Puncheon’s low turn and shot left Guzan with no chance making it three goals in two games for the Englishman.

A Hugo Rodallega goal just before half time was enough to earn Fulham a second consecutive win and close the gap on Norwich to just two points. Fulham came under extreme pressure before taking the lead. Considering the magnitude of the game, the nervous open stages were no surprise with chances few and far between. Ricky van Wolfswinkel attempted to poke home from Olsson’s only to be denied by a fantastic stop from Stockdale. From the resulting corner Stockdale was called upon again when he tipped Fer’s header away, the rebound was smashed wide by Johnson. Norwich kept up the high intensity and nearly took the lead minutes later when Scottish International Snodgrass crashed a free kick against the bar with Stockdale beaten. Despite all this Fulham survived and against the run of play took the lead when Holtby’s free kick was flicked on by Sidwell who found Rodallega leaving him with the simply task of steering home. A few late chances from either side were squandered and Fulham held on to give themselves a huge opportunity of avoiding the drop, as for Norwich games to come against Liverpool, Chelsea, United and Arsenal leave them with an difficult battle to stay in the Premier League.

A spectacular second half goal from Torres Ruiz was enough to earn Cardiff their first away win in six months and shock Southampton. The Saints went close early on when Ramirez’s effort was deflected onto the bar. Despite lengthy periods of possession, Southampton weren’t able to create many chances and Cardiff soaked up all the pressure and twenty five minutes from time took the lead themselves. Torres Ruiz chested down and smashed past Gazzaniga from twenty five yards, a truly sensational goal to ensure Cardiff won their first away game since September leaving the Bluebirds only three points off seventeenth place Norwich. As for Southampton they remain stuck in eighth place, a massive nine points away from Manchester United in seventh.

Stoke continued their brilliant form with a fifth win in six games, as for Newcastle their run of poor form goes on. The key moment of the game came just before the break when Dutch International Erik Pieters over hit cross caught out Krul, looping over his head into the top corner. Newcastle’s Vurnon Anita headed over from three yards late in the game but a draw would have been undeserved for Newcastle, who only really threatened late on, whilst Stoke dominated the majority of the game. Stoke’s fantastic run of form mixed with Newcastle’s poor run means the Midlands club are now only three points behind the Magpies.

Everton made it six wins in a row with a 1-0 win at the Stadium of Light as the hosts stay bottom seven points from safety. The Toffee’s moved a point ahead of Arsenal and into fourth place for the first time in 2014. A poor game in which there weren’t many chances, the first falling to Naismith who blazed well over. The home side’s best chance was when Stones cleared Boroni’s shot after Howard was beaten. The decisive moment in the game came fifteen minutes from time, after excellent play by Deulofeu down the right, Brown tried to intercept his pull back but the defender ended up deflecting it past Mannone for the only goal of the game. Sunderland huffed and puffed but couldn’t find an equaliser, leaving themselves seven points from safety, looking extremely likely to be relegated.

West Brom threw away a three goal lead as they missed the chance to move five points clear of the drop zone. For the third time this season Spurs conceded a goal during the opening 60 seconds, Amalfitano’s low cross was pushed away by Lloris but only as far as Vydra who smashed in to give the Baggies the lead. Just minutes later things got worse for Spurs when Brunt’s trusty left foot crashed home a stunning volley from ten yards out. Spurs looked to have a way back into the game but Adebayor’s tame penalty was easily saved by Foster after Rose went down in the box. Half an hour in Spurs were caught out when Kaboul’s misplaced header left Sessegnon to race forward and coolly slot past Lloris. Spurs didn’t threaten the Albion goal until they were luckily given a route back into the game when Naughton’s cross was deflected and looped over Foster. You could feel the nerves at the Hawthorns, they increased when Kane headed home Lennon’s cross to give the youngster his second goal of the week. Spurs cranked up the pressure and the equaliser was looking extremely likely, it nearly came when Kane went close twice in quick succession. Three minutes into added time a moment of magic from Eriksen completed the comeback, the Dane’s terrific turn and finish into the top corner ended the scoring leaving West Brom extremely disappointed having let a lead slip for the second home game in a row.

Liverpool made it a fantastic ten wins in a row to leave them requiring four wins from four to become champions. Liverpool’s biggest Premier League game in years has had every one talking for weeks. A fantastic atmosphere pre kick off with ‘You’ll never walk alone’ being sung around Anfield from the Liverpool fans to mark the 25th anniversary of the Hillsborough disaster. Liverpool took an early lead when Suarez’s brilliant through ball was confidently tucked away by Sterling, raising the roof at Anfield sending the Liverpool fans in raptures. Twenty minutes later it was nearly two, Gerrard’s header was superbly pushed over the bar by England colleague Hart. From the resulting corner it was two, Skrtel’s towering header from Gerrard’s corner gave the reds a two nil advantage. City couldn’t cope with Liverpool’s pace and were fortunate not to be further behind with several chances wasted by the home side. City’s day wasn’t helped when Toure had to hobble off in the early stages, Javi Garcia replacing the Ivorian. Milner came on for Navas at half time and turned the game in City’s favour. A neat one two with Kompany followed by a cross and a classy finish from Silva had them right back into the game. Minutes later it was Milner at the front again, playing into Dzeko, the ball fell to Silva whose cross was turned into his own net by Skrtel to level things up at 2-2. Anfield became very anxious and the nerves were clear for everyone to see. Looking like City would go on and win, it didn’t turn out that way. Kompany’s sliced clearance fell to Coutinho and his snap shot left Hart with no chance securing a vital three points for the Reds, bringing Captain Gerrard to tears at full time and a fantastic team talk on the pitch Gerrard screamed at his players

“Listen, this is gone. We go to Norwich. Exactly the same. We go together. Come on!”

In his post-match interview he also added

“It was emotional. We need to keep calm. There are four big games to come.

That means so much. They got back into the game and I feared the worst.

That’s the biggest statement we’ve made so far. We’ve showed we’re going to take it to the wire.

That was the longest 90 minutes I’ve played in. I kept flashing back to how long the clock was taking.

It felt like clock was going backwards at one point.

But that is such a big result for us. We’ve got four cup finals left. People said that was the biggest one (match) but I disagree; I think the biggest one now is Norwich.

We’ll let other people comment on whose it is to lose; your experts will have their say.

Nothing is ours yet.”

A second half Demba Ba goal was enough for Chelsea to win their first away game in four and stay in touch with the top two. Both teams made a bright start to the game with Salah hitting the post for Chelsea while Bony’s header was tipped over the bar by Cech. Just fifteen minutes in came the games turning moment, two silly challenges from Chico in two minutes saw the Spaniard sent off. Chelsea should have taken the lead on several occasions but a series of chances were fluffed, Eto’o Ba and Willian were the men responsible. They did eventually take the lead when Ba’s deflected low effort beat Vorm to give the blues the lead and close the gap on Liverpool to two points ahead of their trip too Anfield a week on Sunday. 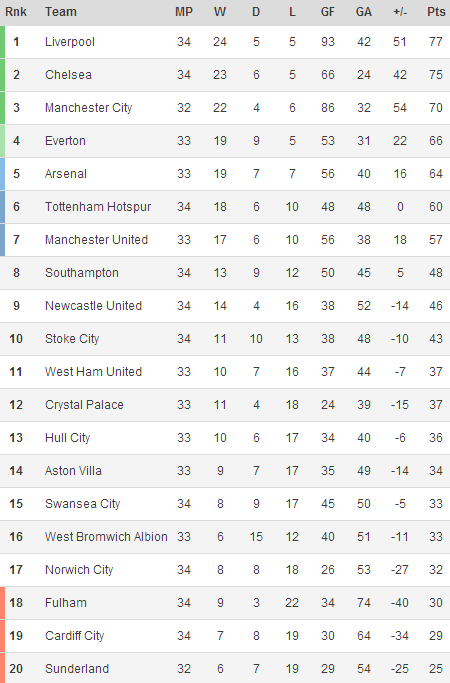