Only two sides picked up three points this week. Hearts managed to delay the inevitable, for a few more days at least and Kilmarnock put a dent in Motherwell’s hopes of finishing in second place. 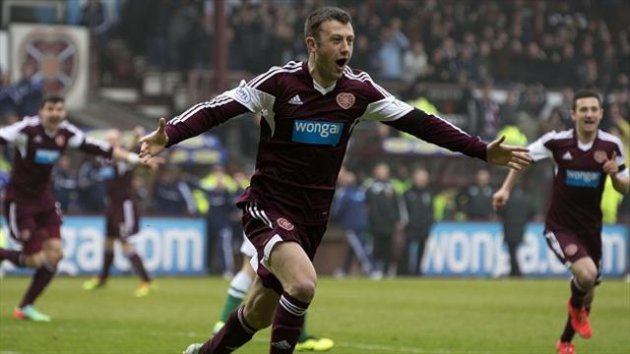 Hearts avoided being relegated by Edinburgh rivals Hibs, as the Gorgie side won 2-0 at Tynecastle on Sunday afternoon.

As always, the game was full of late challenges in the opening minutes. It only took seven minutes for some football to break out, Callum Paterson’s cross from the Hearts right-hand side, was calmly headed down via the head of Ryan Stevenson for Dale Carrick to fire the hosts into the lead. To the obvious delight of the home support, who went crazy. Hibs got back into the game, Sam Stanton’s free-kick was poor, to the delight home fans. James Collins’ shot was also very poor after good set-up play from young Duncan Watmore. Just before the break, Williams had to produce a fine one-handed save to deny Nicholson’s long-range effort.

Hearts started on the front foot after the restart, David Smith’s shot fizzed wide after being released down the right by the goalscorer Carrick. Hibs had a claim for a penalty turned down; James Collins’ shot was blocked by Dylan McGowan on the edge of the box by the use of a hand it seemed. Ryan McGivern missed two chances, before the Hibs fans did have a moment of outrage. Jordan Forster’s header found the back of the net. Although it was disallowed for offside, despite replays showing he was being played on by Dylan McGowan. HIbs lost their way when former Hearts man Alan Maybury was shown a second yellow and sent-off for a late challenge on Billy King.  That was the spark Hearts needed to seal the victory a quick counter-attack allowed Ryan Stevenson to put King clean through, the youngster showed great composure to find the net, scoring his first goal for the club.

Motherwell missed a massive chance to grab hold of second spot, as Kilmarnock turned up at Fir Park and left with a surprising 2-1 win.

These two sides needed the points for different reasons, Motherwell needing them to get into Europe, while the visitors needing maximum points to stay away from that relegation play-off spot.

Motherwell who needed to win to go above Aberdeen into second place, found themselves to be in the lead going into half-time. It was courtesy of a fantastic Iain Vigurs goal. The former Ross County man, picked the ball up on the 18-yard line before standing on it, then spinning and finally placing his shot past Samson.

Killie managed to get into the game six minutes after the hour. Jackson Irvine slipped a pass through the Motherwell defence allowing the youngster McKenzie to finish past Nielsen.  As both sides searched for a winner Eremenko hit the bar, before Craig Slater won the game in injury time with a fine solo run and finish.

Aberdeen and Dundee United failed truly capitalise on Motherwell’s loss, as they cancelled each other out in a 1-1 draw at Pittodrie.

It was the visitors who raced into an early lead. Aberdeen failed to clear, Russell Anderson was the culprit mistake was duly punished as Paul Paton steered his shot beyond Langfield into the bottom corner. John Rankin almost doubled the lead but his long-range effort went wide of Langfield’s post via the ‘keeper’s fingertip. Dundee United continued to pressurise the home side Mark Reynolds had to block John Souttar’s effort over the bar. Aberdeen eventually woke up, Robson fired straight at Cierzniak. The Pole had to be at his very best to turn McGinn’s effort onto the post before the break.

It wasn’t long into the second period before Aberdeen levelled. Robson provided the cross for Niall McGinn to volley home, scoring his first goal in three months. The match was end-to-end from their and apart from an Adam Rooney effort both sides failed to create any further clear-cut chances.

Ross County gave Celtic a guard of honour before helping themselves to a point at Parkhead, which helped to ease their relegation play-off fears.

County punished Celtic’s poor start, Graham Carey picked up the ball inside the Celtic half before finding De Leeuw the striker drilled his low shot past Fraser Forster. Leigh Griffiths set out to equalise, his long-range shot was spilled and the very good Kris Commons was on hand to equalise. Griffiths almost got himself on the scoresheet but he was denied by a fantastic Erik Cikos challenge.

Liam Henderson almost followed-up his goal against Partick Thistle with another at the beginning of the second period, but after Johansen’s assist, the youngster’s effort could only find the post. Despite Celtic’s dominance, Carey almost shocked the home fans when he went close with a 30-yard effort which ricochet off the post with Forster beaten.

St Mirren remain in the relegation play-off place but got an important point in a 2-2 draw with Europe-chasing Inverness.

They started brightly, and took the lead with just three minutes on the clock. Jason Naismith got on the end of Kenny McLean’s free-kick to the dismay of Dean Brill. Caley levelled 13 minutes later, Ross Draper got above Darren McGregor to convert past Dillo. That was the springboard the visitors needed to go in ahead at the half-time break, Billy McKay headed Polworth’s cross to Tansey who duly converted from 10 yards out.

St Mirren’s disappointment disappeared after the break. It was another set-play that they made count. McLean again with the delivery this time it was met by Kelly and the defender made it 2-2. Josh Meekings was dismissed for Caley after a foul on Magennis. Both sides could have won it but Nick Ross or two-assist man McLean couldn’t convert late chances.

St Johnstone fell to a late equaliser at home to Partick Thistle, as the point for the Jags moved them two points clear of St Mirren.

It was the home side who took the lead through Stevie May in the 9th minute. May picked up a loose ball and his shot, which took a deflection found its way past Gallagher. Thistle almost equalised through efforts from Bauben and Dundee United loanee Chris Erskine. St Johnstone almost doubled their lead before the interval Croft’s long-range shot was parried by the ‘keeper before Stevie May’s follow-up effort came back off the bar.

Gallagher had to be in fine form at the beginning of the second half to deny Steven MacLean’s effort, due his defence being caught out by a long ball. Thistle had more chances to get level, Ersikine’s shot went high, and wide before Fraser’s effort was blocked by Frazer Wright. Taylor was next to threaten but his deflected shot was held by Mannus. It was getting late in the day when the visitors finally found a way past Mannus, a loose ball was picked up by Doolan before he finished beyond the ‘keeper to get a deserved point for the away side.