Wayne Rooney made it four goals in three games as Manchester United won their first Premier League home game for almost two months. It didn’t start well for the home side though, Ashley Westwood curled in a thirteenth minute free kick to give Villa the lead and silence Old Trafford.  Just minutes later, Rooney headed in Kagawa’s teasing cross from the right to get united back on level terms. At 1-1 the home side were growing into the game and on the stroke of half time took the lead, Kagawa’s pass was intended for Rooney, ran through to Mata who was brought down in the box and Martin Atkinson pointed to the spot. Rooney made from mistake slotting away giving them a 2-1 lead. With United now in cruise control, they extended their lead with record signing Juan Mata slotting low into the corner to claim his first goal for the club. In stoppage time Hernandez tapped in a fourth from a Januzaj cross to complete the scoring, a 4-1 victory and a rare bright spot for Moyes this season.

Swansea thrashed Norwich 3-0 at the Liberty to ease their relegations fears and move seven points clear of the drop zone. Despite being the better team the majority of the game they only managed to take the lead on the half hour mark when Dutch international De Guzman fired in from the edge of the box. It was soon two, an outstanding one two between Bony and De Guzman allowing the midfielder to grab his second of the afternoon. De Guzman passed the ball into Bony, who flicked back into the Dutchman’s path, who stylishly dinked it over Ruddy to double Swansea’s advantage. Vorm fashioned a few fantastic saves from Snodgrass and Van Wolfswinkel to deny Norwich a way back into the game. Just as Norwich were starting to pile the pressure on, Routledge settled it, slotting low into the far corner after a wonderful pass from Shelvey.

West Brom and Cardiff shared the spoils after a somewhat dramatic game at the Hawthorns, including two goals in stoppage time. West Brom took the lead after just two minutes, Morgan Amalfitano with an audacious lob from an extremely tight angle to give Albion the lead. Just minutes later their lead was doubled, Dorrans collected Vydra’s pass to coolly finish. Cardiff fluked a way back into the match when Mutch’s over hit cross eluded everyone, including Foster, looping into the top corner to cut the deficit. West Brom blew many chances and were made to pay when with just seventeen minutes left, Cardiff Captain Caulker nodded in the equaliser. The game looked to be fading out when West Brom sub Bifouma smashed home Berahino’s cross to what appeared like the end of the action. Ninety six minutes gone and the home side breaking away, what could possibly go wrong? Berahino lost the ball, Cardiff broke away and Daehli deflected shot ended a hectic afternoon sending the away fans in raptures.

Newcastle were thrashed 4-0 to end a dreadful week that’s included two heavy defeats with seven goals conceded and none scored. The home side’s three hopefuls for England’s World Cup squad were all on target for Saints, which guaranteed their biggest win of the season. Rodriguez and Southampton had plenty of early chances with Elliot keeping them at bay, until on the stroke of halftime, Lambert found himself in plenty of room unselfishly laying the ball to his strike partner, leaving Rodriguez with the simple task of tapping the ball home. The second came just four minutes after the restart when Lallana picked out Lambert who controlled and smashed home. The win was secured with the goal of the day from the once again outstanding Lallana, he picked the ball up 25 yards out crashing into the top corner to top of a superb display from the England hopeful. The scoring was complete when Rodriguez added a fourth late on to move the home side above their opponents ending a miserable afternoon for the Magpies. 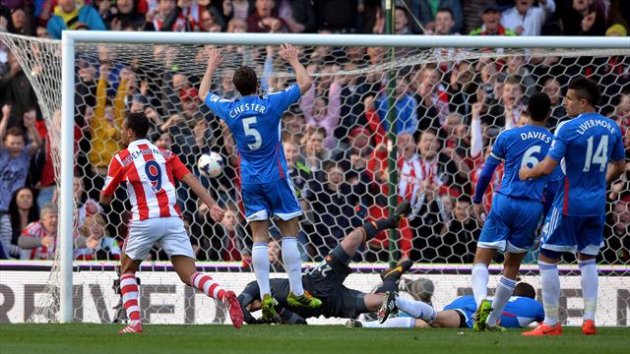 Stoke moved three points closer to their first top half finish in Premier League history.  A game of few chances, the first falling to Hull when Huddlestone crashed a shot that was heading in, Begovic was equal to it. The next chance fell to Rosenior who ended his five year goal drought last week, couldn’t head home from close range. Hull continued to pile on the pressure, Begovic pulling off a tremendous save to deny Meyler’s deflected effort with Jelavic unable to score the rebound. With Hull in cruise control they gifted Stoke the winner. Elmohamady’s error was taken advantage of by Odemwingie who drove forward and slotted in a well-placed finish to guide his side to their third straight win and fourth in five games.

Crystal Palace shocked Chelsea to improve their relegation fears and lay a massive dent into Chelsea’s title ambitions. In an end to end game with several chances for both sides, it was a John Terry own goal that settled it. Chelsea almost took the lead in the early minutes when Azpilicueta’s cross was crashed across the face of goal but was turned away by Ward. Despite a few Palace chances they were well matched by Cech and went into half time on level terms. Only seven minutes after the restart Palace took a well-deserved lead, Wards cross was intercepted by Terry who headed past Cech to give the Eagles the advantage. Minutes later Hazard nearly made it 1-1 but his shot was well saved low down by Speroni. Palace continued to threaten the Chelsea goal with Puncheon shooting just wide. On seventy three minutes came the save of the match, an Oscar shot was deflected into the path of Hazard who found himself ten yards out against Speroni who made a world class save to keep out the Belgium. Palace had a chance to extend their lead when Jerome crashed a shot against the post and Ledley volleyed wide. Chelsea couldn’t find the equaliser and lost their first London derby this season.

Arsenal fought well and re-established some pride as they held title favourites Manchester City to a 1-1 draw at the Emirates who missed a chance to go back to the top. In the early stages city were causing Arsenal many problems, especially down the right hand side. That’s exactly where the opening goal came from, Dzeko found space in the box, smashing a left footed shot that came back of the post, Silva bundled in the rebound. After last week’s 6-0 loss to Chelsea many thought Arsenal would again crumble, and despite nearly going 2 down after a Navas’s cross hit Mertesacker that rolled inches wide, they were soon level. Podolski’s cross from the left was steered home by Flamini raising the roof at the Emirates, drawing the host’s level. The final chance fell to Arsenal and Podolski, the German found himself in space in the box on his left foot, tried to sweep home but his shot hit the legs of Joe Hart. The game fizzled out with the last 20 minutes few chances were created and the points were shared.

Everton made it five straight wins to keep them right in the hunt for a Champions League place whilst Fulham continued their poor run of form. It wasn’t straight forward for the blues though with Holtby and Dembele having good chances during the first half, Howard was equal to both. Fulham gifted Everton the lead in the early stages of the first half, a corner fell to Naismith whose shot came off Stockdale and rolled in. Fulham equalised through sub Dejagah, his right foot rocket flew into the top corner giving Howard no chance. Fulham had chances to take the lead with Heitinga and Kasami’s efforts both saved by Howard. Then came the sucker punch when McGeady’s superb pass set up Mirallas who stylishly finished past Stockdale. The points were sealed when Naismith tapped in from close range after Baines’s pass.

Liverpool embarrassed a sorry Spurs 4-0 at Anfield to move two points clear at the top of the Premier League and practically ended Spurs chances of a top four finish. It was always going to be a tough afternoon for Spurs when Kaboul turned Johnson’s cross into his own net after just two minutes. Midway through the first half, the hosts doubled their lead when Tottenham sub Dawson’s error let in Suarez who confidently smashed in his twenty ninth league goal of the season with his left foot. Spurs couldn’t find a way back into the game and were lucky not to be further behind; Sterling robbed Kaboul and chipped a perfect ball to Suarez at the far post, the Uruguayan’s header was saved excellently by Lloris, to keep the score at two. Only ten minutes into the second half the contest was over, brilliant work from the youngster Flannagan who carried the ball slipping in Coutinho who brilliantly buried his shot past Lloris to seal the points for the reds. The rout was finished when Henderson’s free kick evaded everyone and found the bottom corner, leaving Spurs with four defeats in five and only one goal scored.

West Ham moved 11 points clear of the relegation zone on Monday night after an impressive 2-1 win at the hands of Sunderland. The Mackems falling to their ninth home defeat of the season, the most in the league leaving them four points adrift. A quiet start to the game came to into life on nine minutes when Andy Carroll headed in a Noble corner to give the Hammers the lead. Without any real chances in the first half West Ham led 1-0 at the break. Early in the second half they doubled their lead when Diame’s deflected shot found the bottom corner after Carroll’s knockdown. Despite Sunderland sub Johnson curling in a sublime goal to reduce the deficit they couldn’t force an equaliser and West Ham won their four game away from home this season.