Before Aberdeen lifted the League Cup on Sunday there was League business to attend to. As the split approaches, we are still left wondering who will make up the top six. Even though it’s just a matter of time before the title is officially wrapped up.

The first period wasn’t the most inspiring, Celtic had the ball in the net 48 seconds in, but Stokes who fired home Commons’ knockdown was ruled to be offside. Not long after a three-man Celtic moved finished with Griffiths’ shot being held by Samson. Some poor defending between Ambrose and Mulgrew with the former bringing down Kris Boyd in the area resulted in claims from the home side for a penalty but they were waved away with no hesitation from the referee.

The second period was brighter; Johansen forced Samson into action, the ‘keeper had to be at full stretch to tip the midfielder’s effort over the crossbar. That was a warning sign because soon after the first of Commons’ treble arrived. The Englishman played a neat one-two with Griffiths on the edge of the box, before prodding the ball under Samson. Just two minutes later it was two for Celtic and two for Commons. The midfielder fed the ball to Matthews wide right before making his run into the six-yard box, where Matthews returned the favour allowing Commons to finish. Four minutes from time, Commons completed his hat-trick, when his long-range effort fizzed past Samson, as the Englishman now has 26 goals for the season.

Partick Thistle damaged Hibs’ hopes of grabbing that last top-six spot by inflicting a 3-1 defeat on Terry Butcher’s men at Firhill. Thistle made it back-to-back home wins, meaning that Hibs only have one win in the last 11 matches.

Hibs had a few efforts before, Erskine went close for Thistle, just before the interval Erskine made up for his earlier miss, he slipped the ball to Lyle Taylor, who cleverly cut the ball back, Doolan also got involved with a clever dummy before Erskine applied the thumping finish to give Thistle a half-time lead.

Higginbotham tested Williams not long into the second half, minutes later the midfielder was involved in putting Thistle two ahead. He swung in a deep free-kick which allowed Mair to get above McGivern to head the ball beyond Williams. It only took Hibs two minutes to get back into the game young Sam Stanton’s run set up the chance for Watmore and he duly obliged with the finish. In the dying embers of the game Hibs were pushing forward, it allowed Thistle to catch them on the counter and seal the three points. Higginbotham skipped past two defenders before slotting the ball past Williams.

Dundee United kept their push for a European place on track, coming from behind to beat St Mirren with three second-half goals.

St Mirren took a shock lead 20 minutes in; Paul McGowan directed a free-kick goalwards with the back of his head in somewhat bizarre fashion. St Mirren’s second came before half-time, Gavin Gunning’s attempted clearance hit off Buddies’ striker and went past the United ‘keeper as the home side went into the break two behind.

As the second half started, Gary Mackay-Steven and Nadir Ciftci both squandered good chances before United started the comeback. Ciftci released Ryan Dow whose shot was parried by Kello only for Brian Graham to score from close range. Not long after Armstrong levelled the score with a good finish after McAusland failed to deal with Mackay-Stevens’ cross. The comeback was complete in injury-time when Kello spilled Dow’s effort allowing Ciftci to make it 3-2.

St Johnstone started the better, both Dave McKay and Nigel Hasselbaink had an effort blocked, and the latter headed over. It was the visitors, who took the lead with their first attack, Ikonomou fed De Leeuw who fired his shot into the corner past Mannus. Moments later Mackay met Miller’s cross but he was cursing his luck as it shaved the post.

Just after the break, De Leeuw could’ve made it two. Slew played him through on goal but the Dutchman ran the ball too wide to trouble the ‘keeper. Stephen Anderson almost equalised his header from Wotherspoon’s free-kick bounced in the six-yard box, before Brown palmed it behind. Brown was at it again this time denying Stevie May’s overhead kick. Kiss’ long-range effort went close after Arquin curled a shot wide of the post. St Johnstone came close but were denied yet again. Iwelumo chested the ball down to MacLean to volleyed just wide. St Johnstone had the ball in the net late on, but Anderson’s goal was disallowed for an alleged handball in the build-up. 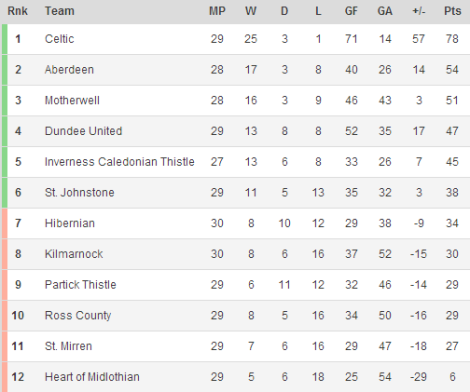