The 2014 MLS season will start on Saturday with replacement referees as the Professional Referees Organization has locked out the Professional Soccer Referees Association after negotiations on a new collective-bargaining agreement soured by Christian Araos.

The news of the referee lockout and the fears surrounding performance of the replacement referees is the main cause for concern heading into the first round of MLS fixtures. It is a first round that will be headlined by the first game of the season as the defending champions, Sporting Kansas City travel to Seattle to take on the Sounders who will be looking to give their fans something positive to start 2014 off with after a disastrous end to last season.

Other notable headlines from the first round of games will be how well do the new-look Philadelphia Union perform at one of the toughest places to play, Providence Field, against the Portland Timbers and a Western Conference Semifinal rematch at the StubHub Center as the LA Galaxy host Real Salt Lake. 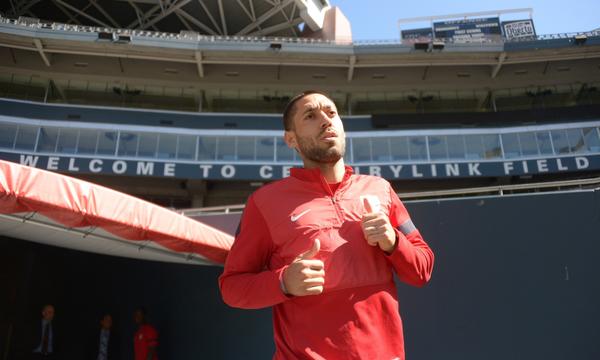 News: Clint Dempsey will feature for the Seattle Sounders after playing the full 90 minutes in the USA’s 2–0 loss to Ukraine in the midweek. Dempsey said he felt that his loan with Fulham was productive despite not having any goals to show for it.

“It was a good experience,” Dempsey told reporters on Friday. “Yes, you would’ve liked to have done better. Yes, you would’ve liked to have helped the team out of the situation. I knew it was a difficult situation when I was going over there because of the position they were in on the table, and yeah, it’s never easy for the boys when you have three manager changes in three months.”

Left back Leo Gonzalez is an injury concern for the Sounders which may lead to Dylan Remick getting his first ever start in MLS. Right back DeAndre Yedlin and center back Chad Marshall were held out of light training earlier this week but Head Coach Sigi Schmid said both are available.

Sporting KC have a few injury concerns as forward C.J. Sapong missed the final two preseason games with a contusion while left back Seth Sinovic said he will be fit to start after suffering a hip injury in SKC’s last preseason game. Head Coach Peter Vermes is playing his injury cards close to the vest admitting he’ll wait and see on Sapong and Sinovic’s fitness as well as the status of midfielder Paulo Nagamura and right back Chance Meyers.

News: Striker Eddie Johnson signed a Designated Player contract putting a bow on the contract dispute that saw him get traded from the Seattle Sounders to D.C. United. Left winger Chris Pontius will be unavailable and will probably be out until the end of the month at least. Alex Caskey was acquired in a trade with the Sounders earlier this week and may start on the left side. Right back Sean Franklin missed practice earlier this week but is fit and available.

Gregg Berhalter has not named his starting goalkeeper for the Crew but there is little to suggest that it won’t be the newly signed Steve Clark. Dominic Oduro is suspended after receiving a red card in last year’s season finale.

News: The Whitecaps may give Chilean attacking midfielder Pedro Morales a debut after signing him on a free transfer from Malaga on Wednesday. Head Coach Carl Robinson will only be without former Red Bull Mehdi Ballouchy who is out indefinitely recovering from a torn ACL suffered last August.

Thierry Henry did not fly out to Vancouver as part of the understanding he and Head Coach Mike Petke have in which Henry is held out of games played on artificial surfaces. Jamison Olave will also be held out of the lineup for the same reason. Armando will likely be handed a debut at centerback along with Ibrahim Sekagya. Left back Roy Miller and attacking midfielder Tim Cahill are questionable to start after featuring for their countries in midweek and making long flights to Vancouver.

News: The Dynamo will be without a handful of players as center back Eric Brunner, defensive midfielder Warren Crevalle and midfielder Servando Carrasco. Jermaine Taylor is available and will likely start at center back along with David Horst. All of Head Coach Dominic Kinnear’s attacking options are available.

The Revolution will be without right back Andrew Farrell and midfielder Lee Nguyen as both are sidelined with minor injuries. Center back Jose Gonclaves is questionable with a groin strain and left back Chris Tierney is also questionable with a hamstring strain. Midfielder Daigo Kobayashi looks likely to make a debut starting in midfield after being acquired from the Vancouver Whitecaps.

News: FC Dallas parted ways with forward Eric Hassli which allows them to officially register new signing David Texeira as Hassli had been taking up one of the club’s international spots. Right back Zach Loyd and center back Walker Zimmerman are nursing minor injuries and may not feature for Oscar Pareja who will be making his debut as head coach.

The Impact signed center back Heath Pearce after he spent most of the preseason trialing with the club after the Red Bulls released him. He may not be fully fit to feature for the Impact as he is still recovering from a season-ending hip injury suffered last year but he flew with the team. Other than that, Head Coach Frank Klopas looks to have a full squad at his disposal to make his Impact coaching debut.

News: Timbers’ Wingers Rodney Wallace and Steve Zakuani are still rehabbing their injuries and will be out for a little while. Other than that, head coach Caleb Porter has a full squad available and will likely start the same team that he started in their final preseason game.

Union Head Coach John Hackworth will be without striker Conor Casey who missed the entire preseason with a calf strain. Hackworth will start Jack McInerney but said he is hoping Casey can contribute this season.

“If Conor can play at the same level he played at last year,” Hackworth said. “I would think he’s going to have a similar impact. At the same time, he’s a year older. He’s already carrying an injury right now. He hasn’t played in these preseason games. And that’s a concern. But we still think there’s a lot left in his tank. And our job is to try to get him healthy and see how effective he can be for our team.”

Right back Sheanon Williams is questionable after suffering a strained quadriceps in the preseason, Fabinho would likely replace Williams at right back with Raymond Gaddis starting at left back.

News: Galaxy goalkeeper Jaime Penedo had an injury-plagued preseason but looks set to feature after playing the first half of their closed-door friendly against Minnesota United last weekend. Other than that, Head Coach Bruce Arena has a full squad available.

Center back Chris Schuler will be unavailable for Real Salt Lake as he recovers from offseason foot surgery. Forwards Devon Sandoval and Robbie Findley will also be out, leaving Head Coach Jeff Cassar to make a couple of lineup choices ahead of his first game in charge. Carlos Salcedo will likely start in defense while Cassar will have to choose between Joao Plata and Olmes Garcia to partner with Alvaro Saborio up front.

News: Wilmer Cabrera will have a full squad available to choose from in his first game in charge of Chivas USA. Cabrera may hand a debut to forward Leandro Barrera who just signed on-loan from Argentinos Juniors.

Forward Mike Magee denied rumors that he was holding out for a new contract, saying that he missed a large portion of the season due to a personal matter that is now addressed. Head Coach Frank Yallop said Magee is available for selection but may not be fit to start.