Anyone who has more than a passing familiarity with Japanese football invariably has good things to say about it. Anyone with the patience to get to the end of one of my articles with their faculties intact, will know that the beauty and drama offered by this unique competition, has been enough to restore my flagging belief in the beautiful game writes Chris Collins.

The J-League possesses many of the characteristics required to become a sporting competition of global importance; unpredictability, colour, technically impressive players and a growing fanbase.  Crucially, it remains largely untouched by the cynicism, gamesmanship and poisonous rivalries that have infected more developed footballing nations.

However, J-League adminstrators will be aware this week of the risk of reputational damage, as Round 2 of the 2014 season was disfigured by  rumours of match fixing and racist banners.

Lets start with the rumours.

Well, they are precisely that – unsubstantiated allegations. The suggestion in some quarters is that Sanfrecce Hiroshima’s  2- 1 victory over Kawasaki Frontale was preordained, and more precisely, that the team leading at half time would go on to lose the game.  Online rumours gathered pace yesterday, suggesting that unusually large sums  of money had been placed on this eventuality, and by coincidence or something more sinister, guess what outcome came to pass?

Experienced J-league observers, based in Japan and with far more experience than I, dismissed the result as an unhappy coincidence immediately, and for a nation whose football is characterised by its fair play, it is an extremely dubious proposition. Nevertheless, it has the potential to be a damaging story, and while the case against this particular match having been fixed is strengthened by the outrageous quality of all three goals, which were of the type that tend to fly in on a 1 in 10 ratio, they also arrived in injury time of each half, prompting more suspicion among conspiracy theorists.

Later in the day, and perhaps more significantly, a few Urawa Reds fans demonstrated their narrow cultural range in their home match against Sagan Tosu, with a ‘Japanese only’ banner (pictured below), a slogan which has caused much consternation in the J-League footballing fraternity and beyond. In attempting to display their strange sense of the wider world beyond the boundaries of football, they served only to embarrass themselves and the club they profess to support.

No one can state with any certainty the motive  behind the banner, though some have speculated the target was new Reds signing and ex Southampton striker Tadanari Lee. In the aftermath, Urawa Reds fans and fellow J-League fans took to twitter to condemn the banner as racist, stupid and unrepresentative of the tolerant majority of football fans. 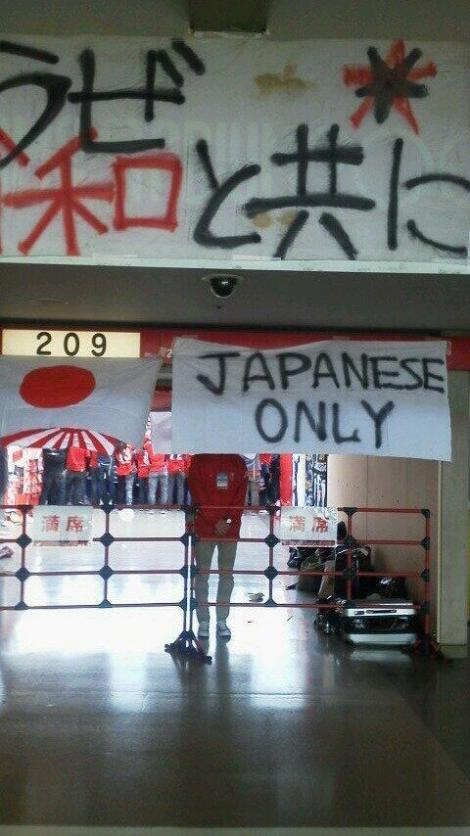 But enough of controversy, what of the action ?

Well, Sanfrecce Hiroshima proved once more that they have the mark of champions, against a strong Kawasaki Frontale side.  There is an unflashy, pragmatic doggedness that marks them out as winners, and though commentators are not yet referring to Hajime Moriyasu’s side as an epoch defining team, a third consecutive title and a run in the ACL will ensure they are viewed in those terms. Hisato Sato struck a brilliant looping left foot volley on the turn to cancel out Yu Kobayashi’s equally spectacular strike for Frontale, but the best was yet to come. Five minutes into stoppage time, Shiotani netted the winner for the second week in a row, despatching an unstoppable free kick high into the net.

While Yohei Toyoda’s chances of representing the Samurai Blue at the World Cup appear to have disappeared into the ether , he remains a striker of some distinction at domestic level, and he scored the winner for Sagan Tosu in the aforementioned clash in Saitama against Urawa Reds. His header was his third goal in two games and enough to take his team to the summit of the table.

Manabu Saito score the only goal of the game for Yokohama F Marinos against Shimizu S-Pulse to maintain their early 100% record and there were 2-0 away wins for both Osaka clubs, Cerezo triumphing over Tokushima Vortis and Gamba earning a valuable win over Albirex Niigata.

In the end though, slogans, banners and rumours grabbed the headlines.  Looking in from afar, football in Japan has the potential to offer something beautiful, but today didn’t seem like one of those days.

Hopefully, normality resumes next week, with the emphasis exclusive on the games.