There appears to be no stopping La Maquina at present. Cruz Azul were far from their best this weekend but some Marco Fabian magic kept their run going as they remain at the top of the table. Meanwhile, Monterrey and neighbours, Tigres continue to struggle. Monterrey’s defeat to a Libertadores rested, Leon caused unrest and we could see managerial changes very soon in Monterrey. There was also a surprise following Chivas’ latest victory as they climbed alongside rivals, Club America in the table. Another defeat for El Turco’s America meant they dropped further off Cruz Azul pace and allowed the old enemy to catch them. 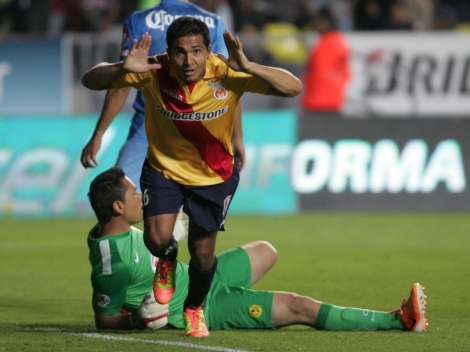 Club America lost consecutive Liga MX games for the first time since November 2012 and there is now a little pressure on Coach, Antonio Mohamed as another game goes by without scoring and the clásico against Pumas is just around the corner.

Despite not playing well things could have been different but the out of sorts, Raul Jimenez missed a great opportunity and Las Aguilas also had a goal ruled out after Joel Huiqui had headed into his own net, only for the officials to pull it back for an offside. On the hour mark, Morelia took the lead and the architect was the talented youngster, Armando Zamorano. His vision and wonderful scooped pass over the defence allowed Christian Valdez to poke Morelia in front.

Later on Friday, in Torreon, Santos gather momentum as they continued Tijuana’s woeful away form with a 3-2 win. Pedro Caixinha opted for a similar side to the one that defeated Arsenal in the Copa Libertadores on Tuesday and was rewarded early as Juan Pablo Rodriguez from the penalty spot and then Mauro Cejas  put them two goals ahead after just 20 minutes. Los Xolos immediately replied through Cristian Pellerano’s powerful finish but Darwin Quintero restored the lead after the break. Fidel Martinez again pulled one back for Los Xolos but it was in vain and so Los Xolos slumped to another away defeat. Having not won away since January 2013 and picking up just 4 points since then is a serious hindrance if Tijuana have any aspirations of challenging for a title. Santos have not yet hit anywhere near top gear but have lost only once so far and if they continue to improve will be a threat.

Cruz Azul left it late but Marco Fabian’s wonder goal ensured another win for La Maquina as they defeated Puebla 1-0 and maintained their undefeated start of the season. The control, turn and then the vision and execution of the lob were worthy of winning any match but the 19 points taken from a possible 21 is even more impressive as Cruz Azul begin to look formidable.

Toluca kept on the coat tails of Cruz Azul with a comfortable 3-0 win in Veracruz. Edgar Benítez latched on to a through ball with the assistance of a static Veracruz defence after just 5 minutes and slotted in the opener. Moments after the break, Isaac Brizuela doubled the advantage following further nice build up and with minutes remaining Pablo Velázquez pounced on a defensive mistake to fire in a third. Toluca have lost just once as they keep pace with Cruz Azul and pull away from the rest. Veracruz, on the other hand, are languishing near the foot of the table with the worst defence in the league.

Monterrey slumped to another defeat inside the Estadio Tecnológico to a resurgent Leon side, who look to be putting their less than certain start to the season behind them. The sending off of César Delgado made life difficult for Los Rayados and before the break Los Esmeraldas took full advantage. Elías Hernández carried the ball unchallenged before unleashing a venomous long range strike which flew past Jonathan Orozco and in off the post just a minute before the break. After the interval with Monterrey pushing forward, Leon hit them on the break to wrap up the points. A long ball over the top released Mauro Boselli and he expertly lifted the ball over Orozco. The bad start to the season caused frustration among the locals and there were some ugly scenes as fans clashed with the police but one message became clear: Victor Manuel Vucetich is wanted back at Monterrey.

Atlante kept their hopes of survival alive with a slender 1-0 win over Pachuca thanks to Roberto Carlos Gutierrez’s scrappy first half goal. Gutierrez was one-on-one with goalkeeper, Oscar Perez and although his initial effort was saved the ball bounced kindly back off him allowing him to slot in the only goal of the game. The win cuts the distance between themselves and Atlas at the bottom of the table but it will count for little should Atlas get something from their game with Pumas.

Finally on Saturday, the match between Jaguares de Chiapas and Tigres offered almost nothing so the least said the better. Tigres are still looking for the first win and sit at the bottom of the table. Ricardo Ferretti’s side look woeful and completely devoid of any invention but perhaps the onus was on Chiapas to attack. Instead Los Jaguares looked timid and unwilling to commit anyone in attack.

Somewhat surprisingly Chivas claimed another win to move level with rivals, Club America in the table. Omar Bravo once again proved his worth with a second half brace to ensure a 2-1 win in the Estadio Omnilife against Queretaro.

Los Gallos Blancos were the better side in the first half but were unable to take advantage and an improved Chivas after the break punished them. Bravo’s clever run and fine finish on the hour mark put Los Rojiblancos in front but full back, Omar Osuna’s wonderful long range strike with 10 minutes remaining looked set to see the points shared. However, just minutes later Bravo restored the lead taking full advantage of some dreadful defending. A free kick pumped into the box found Bravo inexplicably in yards of space and he had time to fire his shot between the legs of Edgar Hernández. There is much to improve still with Chivas but few would have predicted they would be sitting level with America after Round 7.

Pumas came from behind to earn a draw against Atlas. Arturo González superbly gave Atlas the lead after 20 minutes, curling in a precise shot from outside the box and for a long time it appeared Los Rojinegros would frustrate their hosts to hold on to a crucial 3 points. Ismael Sosa had other ideas though and with 15 minutes remaining, the Argentine striker managed to find the space to thread the ball into the bottom corner and earn Pumas a valuable point 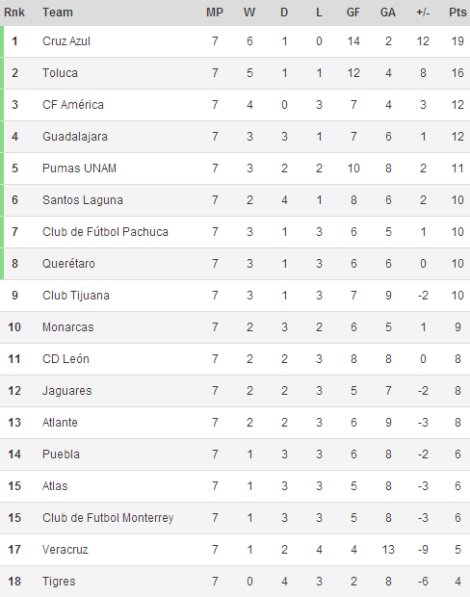