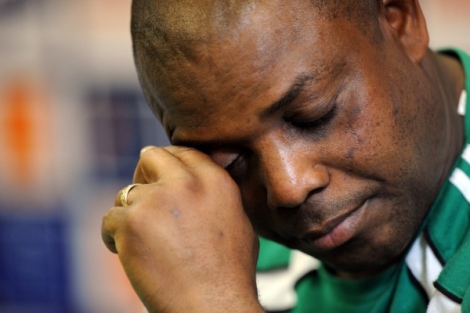 Qualifying Nigeria for a FIFA World Cup always come at a price often too much to pay by the coaches involved.

Ask the last three coaches that qualified Nigeria for the FIFA World Cup as they have lost out to a drama you can only find on a transfer deadline day.

At a time when the coaching crew is expected to be busy with preparations for the FIFA World Cup, Brazil 2014, news broke that the Nigeria Football Federation was tinkering with the idea of a foreign technical help for Coach Stephen Keshi; the only conclusion for the impending drama is another late coaching substitution.

The president of the Nigerian Football Federation, Aminu Maigari, has since cleared the air on the issue stating their side of the story: “At no time did anyone in the NFF, whether myself, the Executive Committee or the management, contemplated, suggested, recommended or even tried to impose the idea of a ‘Foreign technical assistant,’ ‘foreign technical adviser,’ ‘expatriate assistant,’ or whatever, on Mr. Keshi”

Past history favors the Rumors being peddled about

In 1997, Frenchman, Philippe Troussier was sacked despite putting the country on a solid footing towards the 1998 World Cup in France. Replacing him was Bora milutinovich, same was the case for Amodu Shuaibu in 2010 when he was replaced by Lars Lagerback and stakeholders believe the chief money makers are back at their usual critical time to milk the situation.

While many may clamour money as the root of the historical substitutions the 2002 exchange went from Amodu Shuaibu to Adegboye Onigbinde changing the money theory altogether.

Either Money or show of power, Stephen Keshi who has also been a victim of the cruel last minute exchange as an assistant in 2002 and with the hawks of Togo in 2006 deserve all hands on deck to break the second round barrier for Nigeria at the 2014 World Cup in Brazil.