No-one can stop Manchester City of scoring as of late, until Jose Mourinho walked into the Etihad with his Chelsea side on Monday night boasting seven clean sheets in their last nine games. The Portuguese manager walked out at full-time with another clean sheet and a fantastic 1-0 win victory.

In all fairness Chelsea should have been at 4-0 or 5-0 up after the amount of times they hit the woodwork. Manuel Pellegrini, without inspirational Brazilian midfielder Fernandinho, started with Martin Demichelis in the middle of midfield and the lack of quality showed as he was bossed around by Eden Hazard and Willian. Branislav Ivanovic scored the only goal of the game but The Blues were unfortunate not to win by a larger margin. After Ivanovic lashed the visitors in front from the edge of the area on 32 minutes, they hit the woodwork three times through Samuel Eto’o, Nemanja Matic and Gary Cahill. Chelsea sit in third, two points behind leaders Arsenal who defeated Crystal Palace 2-0 on Sunday afternoon.

Arsenal were made to wait for a goal against Tony Pulis’ side but after a goal-less first half, Alex Oxlade-Chamberlain notched two second-half goals to take Arsenal back to the top of the league. Palace had their chances too and could have had an equaliser at 1-0 but Cameron Jerome’s diving header was excellently saved by Gunners ‘keeper Wojciech Szczesny. However, the 20-year-old Oxlade-Chamberlian, who has missed four months with a knee injury, was the difference between the two sided, and could yet return to Brazil in the summer as part of Roy Hodgson’s World Cup squad.

Liverpool dropped two points against Pepe Mel’s West Brom in a 1-1 draw that saw former Everton striker Victor Anichebe haunt the Reds. Kolo Toure gifted Anichebe the goal Brendan Rodgers’ side missed a chance to tighten their grip on fourth place. After 24 minutes, Daniel Sturridge tapped in a Luis Suarez cross to put Liverpool ahead. However, the Baggies grabbed the game by the horns after the interval and they were rewarded for their efforts when Toure’s poor pass found Anichebe and he drilled in a low shot for clinch a point.

In Saturday’s games, Manchester United’s season continues to be a struggle as they were turned over by former Old Trafford favourite Mark Hughes’s Stoke City by two goals to one thanks to a Charlie Adam double. This was the reigning champions’ sixth defeat in eight games. Even though new signing Juan Mata lined up for the first time with Wayne Rooney and Robin van Persie, it was not enough to beat the relegation contenders. In a first half largely dominated by the Red Devils, Stoke went ahead after 38 minutes with a Adam free-kick. The Scotsman’s effort hit Michael Carrick on the edge of the box, taking the ball beyond the reach of a helpless David de Gea.  However, Moyes’ men burst out of the blocks after the interval and Van Persie was on hand to fire home, Mata’s through ball. The away fans’ celebrations were interrupted when Adam unleashed an unstoppable effort from outside the area after 52 minutes.

Everton came from behind to defeat Aston Villa, 2-1 with Belgian midfielder Kevin Mirallas scoring a wonderful free-kick to win the game. Paul Lambert’s men went ahead after Dutch winger Leandro Bacuna notched in the first-half, which was Villa’s only shot on target. Everton substitute Steven Naismith broke Villa’s resistance with a 16-yard shot on 74 minutes before Mirallas’s curling strike five minutes from time moved the Toffees up to fifth in the Premier League table.

Tottenham Hotspur failed to overcome a plucky Hull City side to drop to sixth. New Hull signing Shane Long breached the Spurs defence and curled home just 12 minutes in after being put clear by fellow signing Nikica Jelavic. However, just after the hour-mark, Paulinho equalised for Tim Sherwood’s side with a smart turn and shot.

In the Tyne-Wear derby, Sunderland defeated rivals Newcastle by three goals for the second year in the row at St. James Park.  It was a poor game and a poor performance from the Magpies who failed to replace the outgoing Yohan Cabaye in Friday’s transfer deadline. The Frenchman’s absence showed with Alan Pardew’s side’s failure to keep possession and create clear-cut chances. The Black Cats took the lead after 19 minutes with a Fabio Borini spot-kick awarded when Vurnon Anita clumsily challenged Phil Bardsley in the area. The Geordie crowd got on their teams back when the second goal went in, but it was unfortunate for Newcastle’s defence and goalkeeper Tim Krul. American striker Jozy Altidore combined with Magpies fan Jack Colback and his deflected shot was only parried Krul, giving Adam Johnson the chance to slot the ball home from close range.  After the break, the arrival of loan signing Luuk De Jong on for the impressive Sammy Ameobi (although he had stomach complaints before the game) sparked a much-needed improvement but it was clear the forward is far from match fit. Ten minutes from the end, the man-of-the-match Colback robbed Hatem Ben Arfa who disgracefully crumbled on the half-way line and he and Borini charged forward before the Italian fed his team-mate a great ball and Colback’s left foot did the rest. With other results, Sunderland are far from safe of relegation trouble, sitting just two points above the bottom three.

Andy Carroll inspired West Ham to great 2-0 win over Swansea City before being sent-off by referee Howard Webb. In a combination seen time and time again, Carroll nodded balls down to supply Kevin Nolan for two goals before Carroll was shown a red card after a clash with Chico Flores. The Spaniard’s preposterous reaction to being caught by a stray arm on the top of his head convinced Howard Webb to send Carroll down the tunnel. Hammers boss Sam Allardyce stated soon after the final whistle, he will be appealing the decision.

Fulham’s woes continued after suffering a 3-0 defeat at home to Southampton. Boosting their chances of making the World Cup squad, Adam Lallana, Rickie Lambert and Jay Rodriguez were all scored as England boss Hodgson watched on. This defeat sent Rene Meulensteen’s side to the foot of the table and he will hope his deadline day signings will have an impact in the upcoming touch schedule against Manchester United then Liverpool. 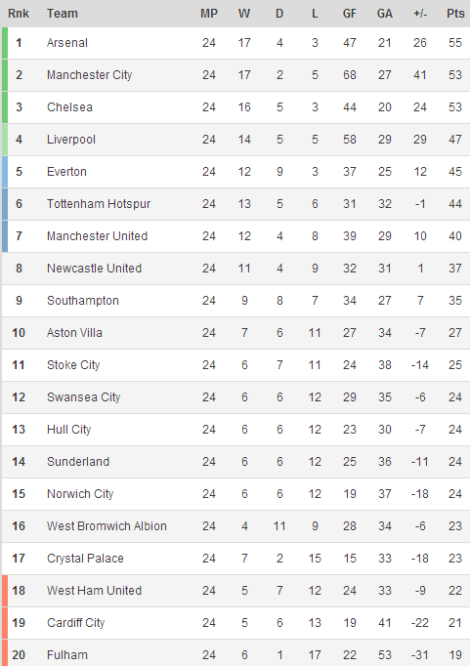