Matchday 30 in the J1 title race concluded on Sunday evening with five teams still able to win the title, mathematically at least. In reality, the 2013 champions are likely to emerge from one of the top three clubs; Yokohama F Marinos, Urawa Reds and Sanfrecce Hiroshima. 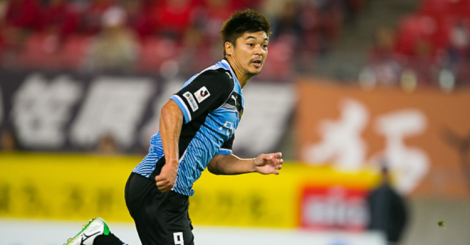 Kashima Antlers are in fourth place after an impressive 4-1 victory over Kawasaki Frontale, but remain six points behind F Marinos with only four games remaining. The league leaders defeated already relegated Oita Trinita 1-0, though they once again had cause to be grateful for captain Shunsuke Nakamura’s dead ball expertise, as he sealed a narrow victory with a trademark free kick.

Urawa Reds are two points off top spot following their 2-1 home victory over Kashiwa Reysol, with midfielder Tsukasa Kashiwagi scoring both of their goals inside the opening ten minutes.

Reigning champions Sanfrecce Hiroshima earned a late, single goal victory over Vegalta Sendai with a strike from Naoki Ishihara six minutes from time.  Hajime Moriyasu’s men stubbornly refuse to bow out of the championship chase despite their defeat to F Marinos last weekend, and remain in strong contention, three points off the top spot.

Cerezo Osaka’s slim title credentials were fatally undermined with a 2-0 defeat away to Sagan Tosu and although theoretically they could still win the league, it would require a scarcely possible collapse from all of the four teams above them.

Omiya Ardija continued their remarkable descent, losing by the odd goal in three to Nagoya Grampus. The squirrels have dropped from first place in the standings to thirteenth in the space of only fourteen fixtures.

At the foot of the table Ventforet Kofu gained a valuable point at home to FC Tokyo, pulling six points clear of Shonan Bellmare in the process. With Oita Trinita and Jubilo Iwata already doomed to J2 next season, Bellmare look increasingly likely to be the third team through the trap door. 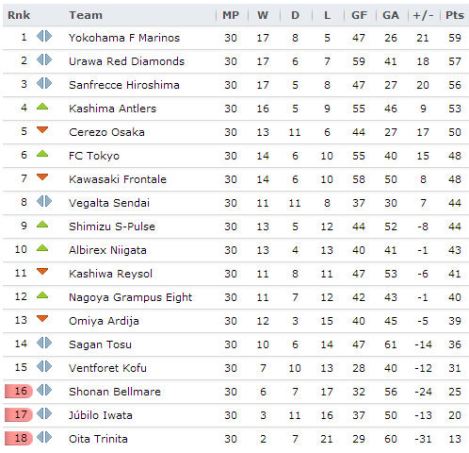