An eventful weekend of Ligue 1 action, saw champions Paris Saint-Germain draw level with rivals Monaco at the summit of the French top flight.

A second-ever professional goal from Marquinhos, and penalty won and converted by Edison Cavani were enough to see PSG clear of Toulouse, who could only manage 39% possession on Saturday evening. The win put PSG back on top of the table for the first time since claiming the title last May.

Monaco looked like they might be in for a test to take that top place back, as Reims took an early lead in their game on Sunday – Antoine Devaux heading home in the 4th minute. However, Claudio Ranieri’s men never wavered and played some excellent football after the goal, producing an equaliser of real quality from Joao Moutinho. The Portuguese captain struck with a vicious free-kick in the 113th minute and that was the end of the scoring in this one.

The 1-1 draw meant Monaco pulled ahead of PSG on goal difference, with just 2 goals dividing the teams as the league table begins to take real shape.

Marseille maintained their strong claims on 3rd spot with a hard fought victory at Lorient. The home side had the better of the game, creating chances they could not take, before eventually being caught out by Mathieu Valbuena in the 58th minute. Andre Ayew added a second at the death to produce a 2-0 scoreline which flatters OM – however they have shown that they can play badly and still grind out a result, which could be vital in holding on to 3rd place.

Lille and Nice remain 3 points behind the top three, with Lille almost snatching all 3 points in a shaky encounter at Lyon. The Lyon backline eventually managed to keep their team in it and earned a 0-0 draw.

Dario Cvitanich again proved the difference for Nice, as their second performance at their new home was marked with another 3 points – Cvitanich grabbing a 48th minute goal against Guingamp, his 5th of the season.

The Brittany derby ended in Nantes favour – the home side pressing their advantage to claim a thrilling 301 victory. First half goals from captain Djordjevic (17’) and Gakpe (42’) looked to kill off Rennes, however another impressive finish from Nelson Oliveira on 55 mins kept the away side in it. However, Lucas Deaux made things certain for Nantes in injury time.

Saint-Etienne will feel they had the worst result of the top six, despite avoiding defeat. 2-0 clear, thanks to two fabulous goals from Franck Tabanou (27′) and Ismaël Diomande (57′), they saw the 3 points snatched from their hands by a plucky Bastia side.

Gianni Bruno struck in the 85th minute, and the comeback was completed by the (widely offside) Francois Modesto, four minutes into stoppage time. Bastia move up to 12th, while Les Verts drop to 7th.

And finally, two 1-1 draws rounded out the weekends action. Evian came close to taking the spoils, at home to Bordeaux – Kevin Berigaud notching his 6th of the season, before Cheick Diabate struck back in the 69th minute. The point keeps Bordeaux out of the relegation places, but only on goal difference.

Fabrizio Ravanelli’s Ajaccio claimed a well-earned point against Montpellier, often outplaying their more-fancied rivals at Stade Francois Coty. Remy Cabella gave the away side the lead via the penalty spot after just 10 mins. Claude Goncalves was sent off for the offense – handballing on the goal line, which looked a very harsh decision in the replay.

However, Montpellier could not make the extra man pay, and Ronald Zubar rose to level before the break. Two minutes later, Yassine Jebbour received his second booking and both teams played out the 2nd half with 10 men. 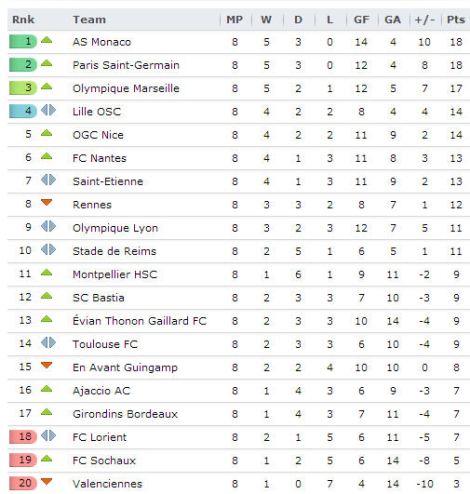