Monaco and Marseille met on Sunday night in a huge clash between the two biggest rivals to PSG’s title. The big-spending visitors arrived at the Stade Velodrome looking to prove to some of the doubters that their summer changes have instantly made them title challengers, while the home club hoped to put the new boys in their place.

The Velodrome crowd were on fine form, greeting the teams with a wall of sound from the kick-off and the home team started brightly, buoyed by the noise. The ferocious early pace soon claimed its first victims – Monaco’s Jeremy Toulalan pulling up with a muscle injury to be replace by Jessy Pi early on, just moments after Marseille were forced into a change; with Souleymane Diawara unable to play on, Lucas Mendes emerged after just five minutes.

And it was the Brazilian who made the biggest difference in the first half – first coming close to connecting with a header at the far post, and then in the 43rd minute, burying a second chance with his head from a corner.

OM were in charge of the game, and Monaco looked out of sorts in the first period. Dimitri Payet and top-scorer Gignac both came close with chances, but the first-half ended with the home side happy.

Monaco started brighter in the 2nd half, and Marseille appeared to let the pressure slip early on. With just 2 minutes played after the break, a Layvin Kurzawa cross was allowed to pass through the heart of the 18-yard box, and that man Falcao was there to apply to simple tap-in finish.

It was the Columbian internationals 3rd goal in 4 games for his new club, despite not looking at his most dangerous self all evening. His night did not end on a happy note however, as after 73 mins he was replaced by Emmanuel Riviere, limping off the field with an injury.

Just 6 minutes later, it was again a substitute who made his mark in the game – this time Riviere, the unexpected smash hit of this Monaco side this season. After finding himself through on goal and forcing a fine save from Mandanda, the forward found himself with an identical chance just moments later. This time he made no mistake, applying a deadly finish past the France goalkeeper, and showing just why he is Ligue 1’a top scorer this season.

5 goals in 4 games is a healthy return from a man who was not expected to feature too much, especially in the early going this year. His acrobatic celebrations show just how much he is enjoying himself at the moment.

Marseille had continued to threaten throughout the half, and will be disappointed to have conceded so late in the game. The home crowd left deflated, Marseille’s unbeaten record shattered and leaving Monaco as league leaders as we head not the international break.

When Zlatan Ibrahimovic struck the post in the early going of this one, the Guingamp players must have been holding their breath for the backlash. PSG, without a home win thus far this season, looked ready to lay down a marker, however the Breton team pulled together and very nearly delivered provided Laurent Blanc with a major headache.

With 67% possession, and 25 shots at goal, PSG were in full control but the stubbornness of the newly promoted side, so lacking in their first game against Marseille, was more than a match for their star-studded rivals.

In the end, the pressure told, however not until injury time at the very death of the game. Adrien Rabiot, the promising youngster who replaced Javier Pastore on 64’, finally broke the deadlock when he bundled home after a save from Samassa fell to his feet.

With the resistance broken, Guingamp heads dropped, and 2 minutes later, in the 93rd of this game, Zlatan stepped up to score his first of the campaign. Last season’s top scorer, found himself on the end of the returning Gregory van der Wiel’s pass and easily breezed past Sorbon in the Guingamp defence, before despatching his shot into the visitors’ goal.

2-0 then on paper, but Blanc will know he has his work cut out for him. With team’s looking to sit back and hit his club on the break, the former Bordeaux boss will need to figure out his Plan B before Ligue 1 returns from the international hiatus.

That said, Paris Saint-Germain’s have now extended their Ligue 1 unbeaten run to 15 games – their longest run for 10 years.

A scoreless draw at Stade Bonal, and another priceless point for Fabrizio Ravanelli’s Ajaccio. The club, who were expected to struggle this season, have bounced back there opening day jitters with 3 superb defensive performances in a row to earn 3 points – and two clean sheets along the way.

Goalkeeper Guillermo Ochoa was again the star attraction, keeping the home side at bay, who had 18 shots at the visitors goal, although only managed to hit the target with 5 of those. Ochoa was at his best saving from Cedric Bakambu, but was never truly troubled.

Ravanelli’s men continue to look for the answers up front, however if the Corsican clubs’ rear guard can remain this strong, they may well be looking at a surprise survival when May arrives.

Nice said goodbye to their famous old home at Stade du Ray on Sunday, and very nearly did it with an excellent 3 points. A quite thrilling game ended at 2-2 however, and Montpellier will be delighted to have escaped with the point.

Cluade Puel’s men were dominant from the early going, with Cvitanich and Bautheac looking dangerous, while Nampalys Mendy had a superb game in the midfield, and looks well suited to that “Next Makelele” tag he has picked up for himself.

The home side took the lead through Timothee Kolodziejczak on 18 mins when he met a Bautheac corner with a fine header, rising highest above the Montpellier defence.

Their dominance was really showing through and the vociferous home support were lapping it up in this last game before the move to their swish new Allianz Riviera home. However, the party atmosphere was undermined on 34 minutes when Jordan Amavi tried to control a hopeful long pass, heading back towards his own goal, but found himself standing on the ball instead. Bobbling out to the well placed Souleymane Camara, he needed no extra invitation to take a touch and deliver a good finish to make it 1-1

However, Nice were not to be outdone, and fired back before the break – the exciting Valentin Eysseric shooting low from just outside the 18 yard box and beating goalkeeper Laurent Pionnier.

The scoring came to a head on early in the 2nd half when Siaka Tiene nabbed the equaliser. Amavi will feel unlucky to have given away the free-kick which led to the Ivory Coast internationals free-kick, however nobody could do anything to stop his finish. A curling effort made both the wall and the keeper by-standers, and was just rewards for the strikers performance on the day.

A fine end to the old ground then, and an excellent advert for Ligue 1 this year away from the big-spending clubs at the top. Nice will hope to convert their excellent home support into more points in their new home, while Jean Fernandez can have no complaints about his teams fighting spirit.

The second of this week’s 0-0 draws came in an exciting affair between two teams who can play some very attractive football and will hope to do well this season. Both will be disappointed with a finish outside of the top 8, although the Rennes boss Philippe Montanier will be disappointed his side could not take all 3 points at home in this game.

The away side had the bulk of possession (57%) and the teams were evenly matched on attempts at goal, however the teams with identical records coming in to this game could do nothing to change that stat after 90 minutes.

Some excellent chances fell Melvut Erding’s way, and he may feel he could have finished better on several occasions, while youngster Wesley Said almost marked his debut in style – breezing through 3 helpless defenders but unable to find the net.

Rennes new striking sensation, Nelson Oliveira was kept quiet by the excellent pairing of Marko Basa and Dane Simon Kjaer, and the home side will be happier with the point on reflection.

Third and final blank scoreline of the week, and this one was another exciting game which could have gone either way, but will not be long remembered by fans of either club.

Neither side could muster much in the way of chances, with Fernando Aristeguieta dallying over an early break through, and Serbian striker Djordjevic striking the crossbar with a header in the 2nd half for the away side.

Newly promoted Nantes will be happy to take an away point then, while Hubert Fournier’s Reims will look to bounce back with a win when they play Montellier after the international break.

The Ligue 1 newboys claimed their second win of the season at home against a Toulouse side which is already struggling under the weight of various departures this summer.

Claudiu Keseru opened the scoring before the break, with an assist from Wahbi Khazri on 43’. This was just moments after the home side lost Julian Palmieri to a straight red card. The 10 men only lasted 12 mins of the second half before they were breached – Toulouse’s Martin Braithwaite providing the equaliser.

However, the 10-men team delighted the Stade Armand Cesari in the 67’ minute – this time Keseru turning provider, and Romaric delivering the crushing blow for the visitors.

Unable to find their way back into this one, Alain Casanova’s team will hope they can find themselves out of the mire they are sinking into this term. With just 2 drawers to show from 4 games, they are propping up Ligue 1.

An even affair at the Stade Yves Allainmat on Saturday, as 15,188 home fans watched Lorient pick up a deserved home win.

The teams came into this one level on points, having each secured a win previously this season, they managed to cancel each other out in almost all areas in this one. The difference being Vincent Aboubakar – Lorient’s striker notched his second of the season in the 15th minute and was a constant threat to the Valenciennes back line.

The away side lost Rudy Mater late on in the game to a red car, but the game was all but over at that point. The home side held on for the win, and will be glad to see themselves lifted to midtable going into the international break. 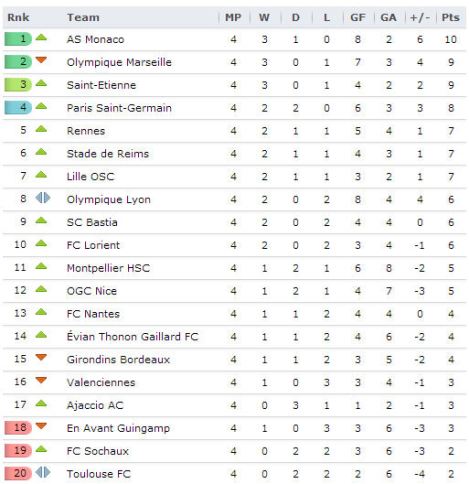