Newell’s Old Boys stayed top of the table despite conceding a late equaliser in their game with the much-improved, Estudiantes but remain the team to beat in this year’s Primera Division. Boca Juniors buoyed by the return of Fernando Gago impressed in their win over Velez Sarsfield but the weekend brought more misery for River Plate and Racing. River continue to look a little toothless and slumped to defeat against San Lorenzo and Racing lost again before new manager, Carlos Ischia takes over.

Newell’s Old Boys were unable to see off an impressive Estudiantes side on Saturday afternoon and despite being the better side for large parts Estudiantes were good value for the draw. Pablo Perez’s second half header looked to have given Newell’s another victory but a last minute Leandro Desabarto header ensured the points were shared.

Quilmes defeated Tigre in Victoria thanks to Norberto Papparatto’s unfortunate own goal. The ball coming back off the crossbar and ricocheting off another defender before Papparatto inadvertently diverted the ball across the goalline.

Saturday’s late kick off saw Racing lose yet again, slumping to a 1-0 defeat against All Boys. Roberto Battion gave All Boys all 3 points with a well struck shot in the 16th minute. An All Boys corner was never really cleared and Battion cut onto his right foot before rifling a shot into the corner. Carlos Ischia will take charge for the next game but has his work cut out.

Not too much to report here as the scoreline suggests but Gimnasia a point behind Newell’s in the table will be pleased with their start back in the top flight.

Colon beat Rosario Central 2-1 in Santa Fe, thanks to two goals from Ruben Ramirez, the first an improvised, acrobatic volley from close range gave Colon the lead and after Rosario had equalised through a Sebastian Abreu penalty it took another spot kick to decide it. Ramirez saw his effort saved but he was fortunate to have the opportunity to tap in the rebound and give Colon the win.

River Plate’s dismal start to the season continued on Sunday night as they suffered defeat in the Nuevo Gasmetro against San Lorenzo. Despite now being able to field striker, Teo Gutierrez, River still look woefully short of creativity and so Julio Buffarini’s contentious second half penalty was enough for victory. River will be fuming that goalkeeper, Marcelo Barovero was adjudged to have come off his line in saving the first penalty but that doesn’t mask the fact that they were very poor.

Boca Juniors, on the other hand, looked much better as they beat Velez Sarfield in La Bombonera. Fernando Gago made his debut since resigning, to lineup against the side that had him last season, and was imperious in the middle of midfield. It was Gago’s freekick that was flicked into the back of the net by Ribair Rodriguez to give Boca the lead after just 1 minute. Ezequiel Rescaldani equalised shortly after but Nicolas Blandi’s short range finish before half time was enough for a deserved victory.

The surprisingly good starts made by Argentinos Juniors and Arsenal continued, to some extent, as both sides avoided defeat and contributed to a dull 0-0. Arsenal remain undefeated and Argentinos’ mean defence continues to make it very difficult for their opponents.

Two first half goals, a scrappy Cristian Canuhe goal and a thunderbolt from Andres Rodales, gave Rafaela the advantage but Belgrano came back well. Two, rather fortunate, goals either side of half time from Ezequiel Maggiolo brought them level and then Luciano Lollo completed the comeback being able to score at the second attempt after his penalty was saved.

Lanus at home proved too strong for Olimpo, as they improved their home record now to 21 without loss. Lauturo Acosta set them on their way when he smashed home the opener just before half time. Olimpo looked to be getting a grip of the game in the second half but two goals in two minutes with 20 minutes remaining killed off the game. Ismael Blanco with the first and then moments later, Nicolas Pasquini ensured the victory. Olimpo still without a win and things already looking a little bleak. 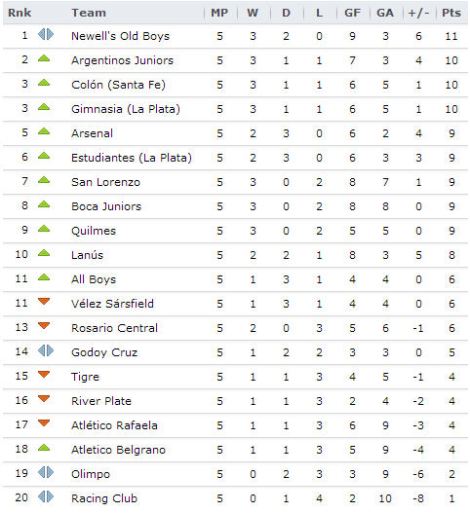