Former Derby County winger Giles Barnes never fulfilled his obvious potential in England, but he is certainly showing signs of doing so across the pond. Pushed forward to play up-front by Houston Dynamo coach Dominic Kinnear and his club are reaping the rewards: Barnes’ brace in the 3-1 defeat of the Seattle Sounders was arguably the standout performance of the round and his brace made him Houston’s joint-top scorer this season.

This was Clint Dempsey’s first start for the Sounders, but it was the Houston Dynamo attack who stole the headlines in this clash. They didn’t take long to grab the lead: on 16 minutes, Will Bruin forced his way through the Seattle defence and drew ‘keeper Michael Gspurning before cutting back to strike partner Barnes, whose shot beat two defenders on the line.

Four minutes later, Barnes spectacularly bettered that effort with a strike that would be crowned Goal of the Round. Picking the ball up 30 yards from goal, the 25-year-old took one touch to set himself and drove a thunderbolt into the top corner of Gspurning’s net. The Austrian custodian saved well from Dynamo midfielder Brad Davis to keep his team in the game on 30 minutes, before Dempsey’s first meaningful contribution saw him link up well with Mauro Rosales and force Tally Hall into a decent save.

Seattle improved after the break and pulled one back on 65 minutes when Shalrie Joseph headed in Marc Burch’s free-kick – helped by Hall’s bizarre decision to try and block the effort with a star-jump. However, Houston refocused and sealed the win 10 minutes later, Bruin netting from close range after Warren Creavalle had thumped a header against the bar. Sounders’ Lamar Neagle almost halved the deficit again late on, but he could only hit the post.

Perhaps the only man who rivalled Barnes’ performance this round was LA Galaxy’s Robbie Keane. The Irishman’s stunning hat-trick powered the Galaxy to a 4-2 win at home to Real Salt Lake. Goalless at half-time, six second-half goals transformed this game from bore draw to an end-to-end thriller. There’d been little to write home about until Joao Plata’s 53rd minute opener, the Salt Lake midfielder nutmegging Galaxy ‘keeper Jaime Penedo after Ned Grabavoy’s clever flick. Perhaps shocking the hosts into action, the lead lasted just three minutes: Keane was given room to turn Carlos Salcedo (not to be confused with the similarly-named ex-Fulham defender) and curled into the bottom corner.

From the Galaxy’s next attack, Real defender Chris Wingert was forced into a brilliant chested clearance off the line to deny Landon Donovan’s chip, but Salt Lake were rocking and could only hold out until the 67th minute. LA sub Sean Franklin found himself in acres of space on the right, and his cross picked out Keane, who was on hand to touch the ball past a static Nick Rimando. Eight minutes later, it was three: Donovan’s corner from the left was met by 6ft 5in defender Omar Gonzalez, who saw his header flash past Rimando and immediately turned to taunt his marker, Nat Borchers.

With five minutes to play, Keane rubbed salt into Salt Lake’s wounds with a classy fourth, collecting Franklin’s through ball and lobbing the onrushing Rimando to complete his hat-trick. Galaxy’s onslaught continued, and Kenny Mansally had to slide the ball off the line to prevent Todd Dunivant from adding to the scoreline. The visitors did restore some credibility five minutes into injury time when Robbie Findley poked home, but RSL boss Jason Kreis will be disappointed with his side’s haphazard defending.

If it all happened in the second half in that game, the action was packed entirely into the first in the Portland Timbers’ 2-1 win over FC Dallas. The Timbers took advantage of RSL’s slip-up to cut Real’s lead at the top of the Western Conference to three points. Diego Valeri missed a great chance to put the hosts in front 20 minutes in, but the midfielder made amends six minutes later, sending over a corner from which Ryan Johnson drew first blood. Dallas took just 60 seconds to find a reply as Mauro Diaz capped some neat build-up play with a cool finish.

The action continued to come thick and fast, and on 33 minutes the Timbers had their winner. Again, Valeri was at the heart of things, prodding a pass into Darlington Nagbe, who finished with aplomb. With Portland having at least two games in hand on most of their Western Conference rivals, Caleb Porter’s men will be quietly confident of success this year.

It all went according to the form book in Montreal, where the third-placed Impact claimed a 2-1 victory against bottom club DC United in the Eastern Conference. Andres Romero almost made the breakthrough for the hosts with just three minutes on the clock, but DC’s Bill Hamid made a good block, and 60 seconds later United had to clear off the line from Felipe. It appeared DC were living on borrowed time, and Montreal duly got their goal on 43 minutes, veteran striker Marco Di Vaio finding the top corner after Felipe’s dummy had taken out two defenders.

Di Vaio missed an even better chance on the hour after running onto DC defender Daniel Woolard’s underhit backpass, but the Italian dragged wide when clear through. The perpetually impressive Luis Silva had the visitors’ first real opening soon after, skipping past a challenge and stinging Troy Perkins’ palms from range. On 81 minutes, Silva went one better, unlocking the Impact defence with a clever ball, and Conor Doyle bent a quality finish around Perkins and into the top corner for the equaliser.

Their joy was short-lived: two minutes later, Montreal grabbed a deserved winner when Patrice Bernier launched a ball into the left channel for Di Vaio to run onto and the 37-year-old expertly cut inside Dejan Jakovic before arcing the ball into the far corner. At an age where most of his peers have retired, Di Vaio is now well and truly in the running for the MLS Golden Boot.

The New England Revolution and the Chicago Fire were separated by just a point coming into their clash at the Gillette Stadium. The Fire’s Mike Magee squeezed a shot against the post on 17 minutes after good work from beefy Ecuadorian Juan Luis Anangono, but it was the Revs who took the lead shortly after half-time with one of the more unique goals you’ll see all season.

Striker Juan Agudelo – set to join Stoke City in January – ran onto Chris Tierney lofted through ball and improvised a brilliant back-heeled lob over advancing Fire ‘keeper Sean Johnson. Chicago defender Bakary Soumare looked to have saved the day with his acrobatic clearance near the goal-line, but ref Edvin Jurisevic ruled that the ball had crossed the line. It was an excellent finish from Agudelo, but he loses points for describing the goal as “a little South American swag”.

The Revs squandered a great chance to confirm the points on 88 minutes when Jose Goncalves squared for the unmarked Kelyn Rowe but the midfielder somehow contrived to miss the open goal. Rowe’s blushes were spared in injury time when he slotted home from a similar situation, this time after Saer Sene’s shot had been spilled by Johnson. The game was marred by an ugly confrontation after the final whistle involving players and coaching staff from both clubs in which the Fire’s Soumare and the Revs’ Sene were both sent off.

Federico Higuain’s second consecutive brace helped the Columbus Crew to defeat Toronto FC 2-0. Columbus got a deserved opener on 19 minutes as Bernardo Anor’s shot was well saved by Joe Bendik but Higuain was on hand to pounce on the rebound. The overworked Bendik had to be at his best to stop Anor and Dominic Oduro from extending the lead before half-time, but his saves counted for little as the Crew wrapped up the win in the second half.

On 67 minutes, Higuain sealed the deal in style, wrapping his foot around the ball to chip Bendik – despite the ‘keeper barely being off his line. They may be neighbours in the Eastern Conference – occupying eight and ninth place respectively – but there’s a big gulf in class between these two sides based on this showing.

Further up the Eastern Conference, high-flyers New York Red Bulls and the Philadelphia Union cancelled each other in one of those MLS rarities, a goalless draw. This was the league’s first 0-0 for a month, and with the Red Bulls welcoming Thierry Henry and Tim Cahill back from injury, few would have seen it coming. The Union came closest to claiming the points when Sebastian Le Toux smashed against the bar, while Jonny Steele was the hosts’ brightest spark, narrowly missing two chances late on.

The Colorado Rapids enjoyed a 2-0 victory over the Vancouver Whitecaps, but it was the visitors who began brightly, with Rapids custodian Clint Irwin forced into saves by Russell Teibert and Kenny Miller early on. After riding that storm, Colorado took the lead on 36 minutes, Deshorn Brown taking advantage of slack marking from Lee Young-Pyo to head debutant Vicente Sanchez’s cross in at the far post. The Rapids made sure of the win on 79 minutes thanks to Edson Buddle’s heavily deflected shot which wrong-footed Caps ‘keeper David Ousted.

Sunday’s only game saw the San Jose Earthquakes nick a surprise win over Eastern table-toppers Sporting Kansas City. Kansas’ Jimmy Neilsen produced a superb one-handed reaction save to prevent Clarence Goodson from opening the scoring on 25 minutes, but he could do nothing about the winner early in the second half, Chris Wondolowski burying a header from Steven Beitashour’s cross.

San Jose survived a strong penalty appeal just minutes later when Beitashour enveloped Kansas’ Soony Saad in a bear-hug to stop him from reaching a loose ball, but they held on for an impressive win. Sporting clearly don’t enjoy this fixture: they haven’t won at San Jose since August 2000. 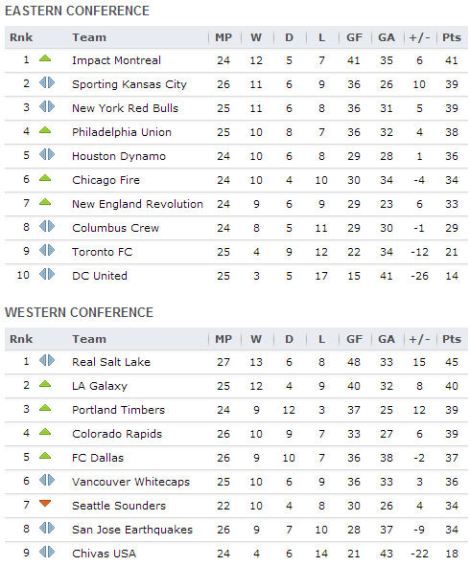