A somewhat surprising third round of fixtures sees Argentinos Juniors and newly promoted, Gimnasia sitting top of the table. Gimnasia have started life back in the top flight in fine form and having played only 2 games thus far are the only side still boasting a 100% record while Argentinos Juniors surprised everyone by thumping title contenders, San Lorenzo. River are still struggling in the prolonged absence of striker, Teo Gutierrez and will be hoping it is resolved by this weekend while Boca bounced back from last week’s defeat to Newell’s with a win in La Bombonera and move alongside the leaders.

Gustavo Alfaro’s, Arsenal got their first win of the season over newly promoted Olimpo in Sarandi on Friday night. A quick-fire double before half time took advantage of Olimpo’s defensive frailties and set Arsenal on the way to victory. First, Ramiro Carrera finished off a fine move and then minutes later, Julio Furch smashed home a rebound to give a two goal cushion at the break. Olimpo looked to set up a lively ending as pressure from a set piece forced a Ivan Marcone own goal but Damian Perez ensured victory in stoppage time with a superb run and curling shot from 30 yards.

Colon also got their first win of the season thanks to a second half penalty from Ruben Ramirez. The 1-0 win over Quilmes was not a classic but comes as a relief for Colon.

Gimnasia hosted their fellow promoted side Rosario Central and continued their fine start to life back in the top flight. With two wins out of two Gimnasia find themselves the early pace setters and Saturday’s result was another well-deserved victory. Taking early advantage of Central’s drowsy defence, Gimnasia raced into a two goal lead. With only a minute gone Pablo Ferrari diverted the ball past his only keeper under pressure from Federico Rasic and then before the 20 minute mark, Rasic got himself on the scoresheet heading in at the back post. Former Gimnasia striker, Franco Neill pulled one back for Central but with 5 minutes remaining Ignacio Fernandez made sure that Gimnasia’s 100% record remained intact with a fine goal.

Title hopefuls, San Lorenzo were brought back down to earth suffering an emphatic 3-0 defeat to relegation tipped, Argentinos Juniors. Despite having the better of the game, Caruso Lombardi’s side defended valiantly and stunned El Ciclon with goals from Julio Barraza, Hernan Boyero and Rodrigo Gomez.

Racing were comfortably beaten by Tigre perhaps edging Manager, Luis Zebeldia towards the exit door. Boca loanee, Sergio Araujo scored twice before Racing flop, Jose Sand rubbed salt into the wound by adding a third. Rodrigo De Paul managed a stunning consolation with a strike from distance but it made no difference to the result and so the end could be nigh for Zubeldia.

Newell’s Old Boys and Belgrano were also unable to produce any goals when they met in Rosario mainly thanks to the performance of Belgrano keeper, Juan Olave. Olave has been at fault in both games prior to this but can be credited with ensuring Belgrano left Rosario with a point.

Boca Juniors bounced back from their defeat earlier in the week to defeat Atletico Rafaela in La Bombonera, kickstarted by Juan Roman Riquelme’s indirect freekick following some dreadful defending. Lucas Albertengo brought Rafaela level just before half time but Boca had a little too much. A wonderful passing move on the hour mark was eventually hammered home by left back, Emanuel Insua. With Fernando Gago back fit for the next round, Boca are well positioned at this early stage.

River Plate dropped more points as they produced a goalless draw in Mendoza with Godoy Cruz. With Teo Gutierrez still not able to play River look woefully short up top and lack any real edge but Ramon Diaz has named him in the forthcoming team so it appears this could have a resolution in the near future to the relief of River fans.

In Floresta, All Boys and Velez fought a pretty even game in which neither side could really grumble with the 1-1 scoreline. Mauro Zarate made his first start for Velez since returning but the comeback didn’t go exactly according to plan as Zarate was forced off injured in the second half, looking visibly upset. All Boys took the lead in the first half when Javier Campora burst through the Velez defence and slotted past Sosa for his first goal at his new club. Velez put the pressure on All Boys and were rewarded on the hour mark when Maxi Pellegrino bundled the ball into his own net, under pressure from Velez captain, Cubero.

Later, in Lanus, it also ended 1-1 with both goals coming early against Estudiantes, the result meaning neither side finished round 3 top of the table. Estudiantes led in the first minute, some comical defending was punished spectacularly by Guido Carrillo’s bicycle kick. However, 10 minutes later, Lanus were level when a long punt down field was flicked on and eventually Lauturo Acosta poked the ball under the keeper. Cue, a typical Santiago Silva inspired celebration complete with fireman’s helmets. 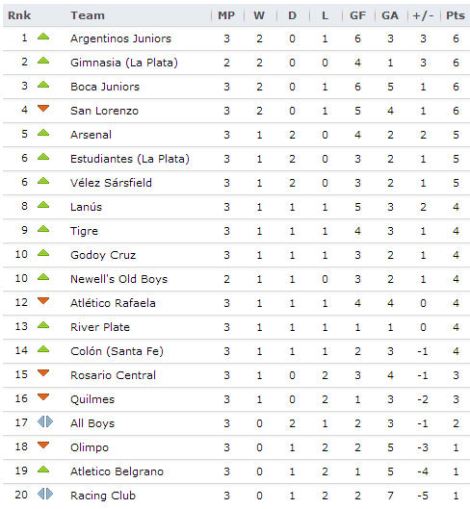