Last night, Josh Lawless took a look at what he feels will be his top nine clubs this coming season. Will Burns returns tonight to discuss the remaining eleven clubs previewing their campaign. All of the clubs in this preview will be striving for a top ten finish, but in my opinion only six of them stand a chance of achieving this aim.

Paul Lambert has signed six players that can only help the inexperienced Aston Villa squad that competed last term. However, the biggest success of the summer of the Villains will be persuading star striker Christian Benteke to stay in Birmingham. The Belgian was a dominant force for Villa scoring 19 goals in 34 appearances and Lambert will hope for more of the same. Villa failed to win any of the four league games that Benteke missed through injury.

With Gabriel Agbonlahor in reserve and Darren Bent sulking last year, Lambert has moved to bring in young Danish hotshot Nicklas Helenuis from Aalborg to ease the burden in front of goal.Other signings brought in included another Dane, 20-year-old powerhouse Jores Okore.

A central defender, which brings some much needed iron to the Villa defence that old warhorse Richard Dunne, had brought in the past. Spanish left-back Antonio Luna from Sevilla, central midfielder Aleksandr Tonev and Dutch right-winger Leandro Bacuna will bolster the previously stretched squad to steer Lambert’s side away from relegation.

Earlier this week, the heavy wages of Bent was shipped off the wage bill back to London in a season-long loan deal with Martin Jol’s Fulham. The question of why the veteran striker would care about playing for the Cottagers, when he did not last year for a similar side like Villa remains to be seen. This could prove to be a bad deal for Jol, who has not been successful in the transfer windows of the past.

This season could be different, as the free signing of Bilbao defender Fernando Amorebieta brings a classy defender to Craven Cottage. The pairing of the Spaniard and Brede Hangeland provides Jol with a strong duo to protect new Dutch goalkeeper Maarten Stekelenburg, himself a snip at £3million from AS Roma.

Although the expectations are to climb into the top ten after a mid-table obscurity finish of 12th last year, new owner Shahid Khan brings a lot of uncertainty to the club. His current project, NFL side Jacksonville Jaguars have struggled since he took over in 2011. The Fulham fans will be hoping that an influx of cash will be brought in, but so far, the cash have not been shown.

One team that I feel will not feel the dreaded ‘second season syndrome’ will be Southampton. Last year, the excepted relegation did not materialise but the dismissal of Nigel Adkins strangely did. In his place was Mauricio Pochettino. He was not wanted by the Saints’ fans initially, replacing a popular figure at St. Mary’s, but after achieving a respectable 14th he won the majority of those fans over.

Only two players have been purchased by the Argentine but at hefty fees. Highly-rated defensive midfielder Victor Wanyama arrived from Celtic for £12.5million and Croatian defender Dejan Lovren came in from Ligue 1 side Lyon for a reported £8.5million. Keeping the team that achieved survival last season, and Pochettino’s first full season at the helm, the South East club could be the surprise package of the year.

Steve Clarke’s West Bromwich Albion was fired up the 8th by on-loan striker Romelu Lukaku and his 17 goals last season, but the Belgian has stayed at Chelsea this time round. Clarke needed firepower in the summer and he has brought in Premier League veteran Nicolas Anelka, now at his sixth club, to help in front of goal. Experience also arrived in defence also with 32-year-old Uruguayan Diego Lugano inherited from PSG.

Even though Clarke has a relatively small squad, with Anelka feeding off Youssuf Mulumbu and Claudio Yacob and Lugano helping out Jonas Olsson and Gareth MacAuley in defence, they could be contenders to achieve tenth or above this year.

Chris Hughton has spent wisely and brought in some real quality to his small Norwich City side, that managed to climb to 11th last year. Dutch striker Ricky van Wolfswinkel arrives from Sporting Lisbon after scoring 28 goals in 55 games for the Portuguese giants. Gary Hooper, last season’s profilic hitman for Celtic, will provide competition for the Dutchman. At the back, former Manchester City defender Javier Garrido has signed for a reported £1.8million from Serie A side Lazio.

Hughton’s best signing may probably be the capture of strong midfielder Leroy Fer from FC Twente for around £4million. The Dutch international, is great in the air, holding up the ball and feeding the strikers with killer balls, he scored twice with two power headers in this summer’s Under-21 European Championships.

Last but not least, is Alan Pardew’s North East giants Newcastle United. St. James Park is packed with over 50,000 fans every home game and each and every one of them is asking the same question as the past two summers… what is going on at the club?

Owner Mike Ashley has once again threw a spanner in the works, as soon as the Geordies started to show a smidge of stability. Joe Kinnear, who seems to be living under a rock for the last four seasons, returns as the Director of Football at the club just five seasons after contributing heavily to the club’s relegation down to the Championship in 2009. In charge of transfers, Kinnear has managed to bring in just one first-team signing, a loan deal for French left-sided forward Loic Remy from QPR was completed two weeks ago, but the player has yet to place a foot on the training pitch due to injury. It’s a major turnaround for Remy, as the player rejected Newcastle last January to join QPR for ‘footballing reasons’.

The role of Kinnear in regards to manager Pardew is a worrying one for the Toon Army. Will the former Wimbledon boss undermine the current boss and maybe force him out?! Pardew has the hardest job in Newcastle, keeping the array of talent he has at his disposal concentrated on the job at hand, climbing the table and putting a smile of the fans faces.

All this has gone on while striker Papiss Cisse apparently refused to wear the new shirt due to the new sponsor going against his religious beliefs. The passionate loyal Newcastle fans will just want the first ball kicked to forget yet another mess created by the Sports Direct mogul.

A top ten could be well in sights with Cisse, Hatem Ben Arfa and Remy firing on all cylinders but playing a 4-3-3 formation with attacking full backs Davide Santon and Mathieu Debuchy, both poor defensively, could lead to more trouble for the Magpies. 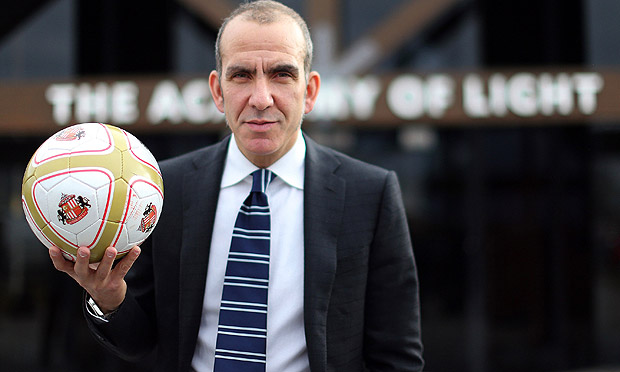 The remaining five teams will contest the bottom three places. Staying in the North-east is Newcastle’s rivals Sunderland. With volatile Italian inexperienced manager Paulo di Canio installed in place of the calm, practiced coach Martin O’Neill towards the end of the season. The move was a risky one but the Italian steered the Black Cats away from relegation.

However, the current transfer window has seen massive upheaval at the Stadium of Light, which has caused an impending leap into the unknown.Despite losing goalkeeper Simon Mignolet to Liverpool, Di Canio has shipped out players that will not be missed at Sunderland. He has brought in an influx of ten new players and only two have previous Premier League experience.

It is a move we have seen all before in the England’s top flight, and such a change in the squad does not bring success. If they can survive a season without relegation, this team could be a force to challenge for the top half of the league, but this term, highly unlikely.

Another relegation contender has to be Mark Hughes’ latest job, Stoke City. In his previous Premier League vacancies, Queens Park Rangers can only be considered as Hughesy’s real failure, but this is sure to be his biggest test.The tactically-inept long ball specialists will be expected by the Stoke fan-base to be transformed into a new direction by the new gaffer.

Hughes has not been successful in the transfer market at past clubs and will this change at the Brittania. PSV Eindhoven must have been rubbing their hands together with glee receiving £3.1million for injury-prone left-back Erik Pieters, Stoke will be lucky to get ten games out of the Dutchman after being lumbered with problems over the past three seasons.

Spanish Under-21 defender Marc Muniesa arrives from Barcelona on a free and should link up well with winger Jermaine Pennant but the lack of a profilic striker looks like those two will be underutilised.

Hughes still has until September 2nd to add to his forward line, but without a decent 15 goal-a-season man, I think they could be facing their first return to the second flight of English football for the first time since 2008.

That leaves us with the three new boys to the division, Cardiff City, Crystal Palace and Hull City.

The last time Welsh side Cardiff played top-flight football was 1962 so it’s no wonder that they have splashed £8million on England international defender Steven Caulker from Tottenham and paying £7.5million for Danish young striker Andreas Cornelius. There is no doubt that Caulker has talent and has held his own in the Premier League since being handed his debut at Spurs in September 2010. The Dane rookie on the other hand has only has played in the Danish Superliga for FC Copenhagen for one season in the top flight. Cardiff have also added Chilean nutcase Gary Medel from Sevilla, a man that not shy of a red card, a temper tantrum or smashing a few bits of furniture.

Although, if Cardiff look to be in trouble come Janaury, the Malaysian owners may give manager Malky Mackay extra funds to try and keep the Red Dragons in the league.

Ian Holloway returns to the Premier League once again, but this time with a new troop in Crystal Palace. Holloway has raided the Championship for signings and added Under-20 Spanish captain Jose Campana from Sevilla and Arsenal flop Marouane Chamakh. The squad is not strong enough for the top flight and Argentina goalkeeper Julian Speroni will be busy throughout the next 8/9 months. As will 40-year-old veteran striker Kevin Phillips, who Holloway will rely on getting the goals to keep them in the league.

Steve Bruce also returns to the top division with the newly renamed Hull City Tigers. Club owner Assem Allam removed the “Association Football Club” part of the Yorkshire club’s name, which has been in effect since their formation in 1904. Any references to AFC on club branding will be phased out, but will remain on the shirt crest during their first season back in the Premier League. Fans are not happy, obviously, with the name change and Allam has not appeased them with a relegation dogfight warchest.

Like Holloway, Bruce has recruited most of his summer signings from the lower leagues, however some Premier League experience with defender Curtis Davies from Birmingham City, winger Ahmed Elmohamady from Bruce’s former club Sunderland, and long-time Newcastle goalkeeper Steve Harper all on free transfers. But synonymous with Palace, Bruce does not have the squad to compete and will have to work well beyond their expectations for Premier League survival.