Leonel Alvarez will be frustrated that he side failed to defeat Chicó at home, especially when last week they gained a fantastic 3-0 away win at Once Caldas. But in fairness, it was an even game and both sides deserved to take home the point.

Before the game, Cali was hit with a blow when Mosquera went down while partaking in the pre-match warm-up. It was later revealed by club doctor Gustavo Portela that the new signing from Nacional had suffered a partial rupture of the Achilles tendon, and that the player will be out of action for at least twelve months.

Inside a packed Monumental de Palmaseca, the home side found themselves in the lead after 15 minutes, Miguel Murillo scoring his second goal in as many games. He can thank Sergio Romero for a great surging run to create the goal. Romero picked up the ball midway through his own half, sped past two defenders and placed the ball at Murillo’s feet. The 19-year-old striker had time to control and fire home past goalkeeper Andres Saldarriaga, some poor defending by the Chicó guard. Murillo has been really impressive in the last two games and looks a star in the making.

The visitors grabbed an equaliser against the run of play just after the half-hour mark with a goal from Jairo Castilllo. A mix-up in the Cali midfield gave the ball away into the path of Cristian Alessandrini, the midfielder found Castillo with a defence splitting through ball and Castillo sidestepped 41-year-old goalkeeper Faryd Mondragon and sent the ball trickling into the corner of the goal.

After a disappointing scoreless draw in the Boyacá derby last weekend, Chicó and coach Alberto Gamero will be thankful for this point.

Itagui failed to get going until Huila lost Jéfferson Lerma and Luis Páez to red cards deep inside the second-half. The 35-year-old Javier López grabbed the only goal of the game, an first-time effort from the edge of the box that gave Williams Buenaños no chance of saving in the Huila goal.

After intercepting the ball in midfield, 19-year-old Steven Murillo launched a ball forward towards Danilo Moreno Asprilla. Even though he had three defenders and a goalkeeper to contend with, Asprilla beautifully finished the goal to give his side the lead on 16 minutes.

Some poor defending from the home side lead to equalising goal in the 35th minute. A ball was whipped into the area by Fausto Obeso and after a double save from goalkeeper Nicolás Vikonis, Wilson Galeano was there to tap home the rebound.

No other goals came and it was a fair result, even though it was not an excepted one.

Once Caldas’ poor run continues as they fell to a single goal, courtesy of Junior, on early Sunday morning.

The hosts were in front after just 15 minutes thanks to a Luis Carlos Ruiz scrappy goal. Some excellent pressing by Edwin Cardona down the left flank created the goal as his final shot was deflected out by goalkeeper Jose Fernando Cuadrado. The ball spun high into the air where Michael Ortega flung an acrobatic effort towards the goal where Ruiz nodded it home.

That makes it two wins out of two for Junior, and no goals and a double defeat for Once Caldas.

Quickly becoming the ‘kings of the late goals’ Nacional did it again and this time against Santa Fe, the team they conquered to win the Apertura championship last month.

We had to wait until 15 minutes remaining in the 90 for the opening goal, a Santa Fe penalty powerfully converted from Argentine striker Silvio González.

The late equaliser was inexcusable from the Santa Fe defenders. Twenty-two-year-old striker Wilder Guisao was unmarked a planted an easy header past Camilo Vargas to score, after a free-kick was sent into the area by Juan David Valencia.

Equidad clinched a 2-1 win away to Petrolera in a game where the home side must be ruing missed chances to take the three points themselves.

Throughout the first 45 minutes, it was all Petrolera. The yellow shirts were buzzing around like a swarm of bees, with only Equidad goalkeeper Diego Novoa or the woodwork stopping them from taking the lead.

But against the run of the play it was Equidad who took the lead with a superb solo effort from Darwin Andrade. Bursting through the middle of the pitch and powerfully outsprinting three Petrolera defenders, Andrade was one-on-one with Guatemalan ‘keeper Ricardo Jerez but the Equidad man finished superbly to send his side a goal up at the break.

Petrolera’s main source of attacking creativity was the young Cristian Palomeque, who is currently on-loan from Nacional. The 19-year-old’s pace was frightening and he came close to equalising right on the half-time whistle but the youngster blazed his shot wide from close range.

The ever dangerous Michael Rangel grabbed an excellent levelling goal for the hosts on 52 minutes. Palomeque was again involved, lofting a chipped through ball towards Rangel and two Equidad defenders. Instinctively, Rangel smashed a volley over Novoa to give the home crowd their deserved equalising goal.

Unfortunately for the fans inside Estadio Alvaro Gomez Hurtado, the game was stolen away from them with only seven minutes remaining. Deep inside his own half, Elkin Serrano stumbled one the ball and striker Wilson Morelo pounced and fired home to take the points for Equidad.

A poor game in the Estadio Centennial on Sunday evening in a game that was abandoned four minutes before full-time due to crowd trouble. A spectator fight escalated into a pitch invasion stopped play and referee José Palacio sent all the players down the tunnel for their own safety.

The best chance to break the deadlock came on 80 minutes when Danny Santoya had the opportunity to score from the penalty spot. The new signing from Mexican club Necaxa hit the spot-kick poorly and it was an easy save for José Hubert Escobar in the Cúcuta goal.

Envigado can be thankful to their Peruvian goalkeeper Jimmy Schmidt, as the stopper kept Tolima’s relentless pressure at bay to keep the score at just the single goal.

Tolima’s attack of Yimmi Chará and Mauricio Mendoza was linking up delightfully but unable to break the deadlock. The breakthrough eventually came on 69 minutes and it was a perfect free-kick by defender Félix Noguera. A low curling effort that spun around the hands of Schmidt to give Tolima the victory.

Millonarios were hot off the mark on early Monday morning going ahead after just three minutes of play. A well-worked goal, with Luis Hernán Mosquera and Wason Renteria linking up to provide the ball for Harrison Otálvaro to finish on the half-volley.

El Campin went wild but only for six minutes as Medellín grabbed an equaliser from Yulián Mejía. It was another good team goal, with Germán Cano and Marco Perez Murillo acting as providers this time.

Millos were then shell-shocked by another goal that gave Medellín the lead on 21 minutes. Murillo with a stunning drive from outside the area, hitting the ball with such power and curve to give Luis Enrique Delgado, no chance of stopping.

A 49th minute penalty was simply converted by Renteria to share the points between the sides after goalkeeper Leandro Castellanos brought down ‘Man-of-the-Match’ Dayro Moreno inside the area. 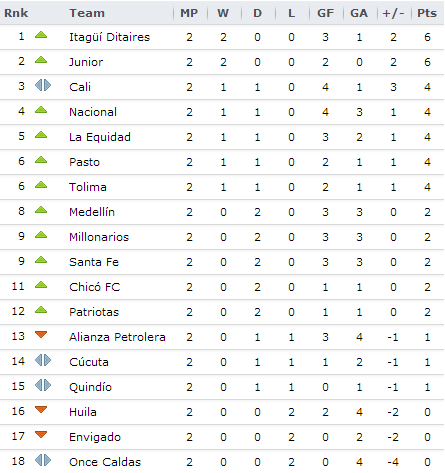