The season has started and I realised that I had not written anything about the three sides that were promoted to the Primera Division this season. So here is the quick guide to Rosario Central, Gimnasia La Plata and Olimpo…. 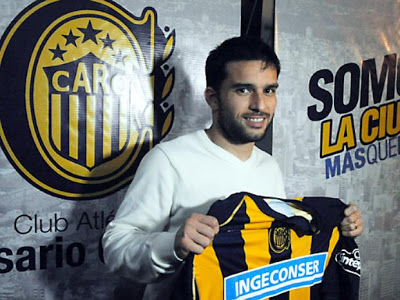 Promoted back to the top flight as champions of the Nacional B, Rosario Central take up their rightful place in Argentina’s top flight. One of the oldest and biggest sides in Argentina, the Primera Division is a better place for their involvement. They bring a rich history, some of the best supporters in the country and one of the fiercest rivalries – the Rosario clasico with Newell’s will be one to be be missed!

Founded in 1889 by a group of railway workers from the British-owned, Central Argentine Railway the Rosario based employees formed the club, led by the club’s first president, Colin Bain Bader. Several championships followed in the amateur era before the game went professional in 1931. Since then they have claimed 4 league titles, most recently in the 1986-87 season, making them one of the most successful clubs outside Buenos Aires.

Famous for their fanatical supporters, the fans still celebrate their victory over rivals Newell’s in 1971 in an annual ceremony, worshipping former player, Aldo Poy and his diving header. You can read more about this here.

So, what to expect from this season?

Rosario were promoted as champions but have not wasted any time in revamping the squad in preparation for the rigours of top flight football. A whole host of players have left and some useful acquisitions have been made. River striker, Carlos Luna arrived late in the window and could strike up a partnership with fellow signing, Franco Niell. In addition, Rosario snapped up released Boca pair, Pol Fernandez and Lisandro Magallan and also signed useful Tigre centre back, Alejandro Donatti. A team fit for top flight football is being formed and as a result Rosario Central should comfortably secure enough points to retain their status in the division.

Keep an eye on the weekend of 18-20 October for the Rosario clasico!

Another of Argentina’s oldest and historical clubs and also with a fierce rivalry of one of the existing Primera clubs – Estudiantes. Gimnasia finished second in the Nacional B, but had the best attack in the league.

An upper class sports club formed in 1887, primarily, as the name suggests, for gymnastics and fencing. Football followed, and was later dropped, causing the creation of Estudiantes, and then again reintroduced to the club. Despite this long history, Gimnasia are not particularly successful, with only 1 championship to their name, back in the amateur era in 1929. For this reason, even this solitary achievement is often overlooked and discounted as it was pre-professional football.

So, what to expect this season?

Well, as a promoted side things could be tough. However, Gimnasia are better equipped than some and could well hold their own. With a challenge out of the question only survival is important and that is an achievable target given the resources.

As I said, Gimnasia were top scorers in the Nacional B, in part due to the exploits of striker, Franco Neill but he has signed for competitors, Rosario Central. Despite this set back, Gimnasia have signed well – Neill’s replacement comes in the form of Ivan Borghello who signed from All Boys. His team mate from All Boys, Maxi Coronel joins him, in addition to Gaston Diaz from Velez and Juan Pablo Rodriguez from UNAM in Mexico.

By far and away the smallest side in the Primera Division, the Bahia Blanca based side will enjoy their time back in the top flight but an extended stay could be a tough ask. Olimpo’s promotion was based around their solid defence, the best in the Nacional B, but that will be tested to the limit over the course of the next year.

Formed in 1910 and with no major honours to their name, there is not a great deal to write about the history of Olimpo. 3 second tier titles, last in the Primera 2 years ago where they beat Boca in La Bombonera for the first time. Erm…a small stadium well out of Buenos Aires and they play in yellow and black. That’s all I can manage. (apologies to any Olimpo fans)

So, what to expect this season?

Olimpo too, have let a number of players leave prior to this season and brought in some more experienced faces. Cristian Trombetta, Matias Sarulyte, Martin Perez Guedes, Gustavo Oberman, Fernando Meza and Paulo Rosales will all add something but it could still be a long and difficult season for the Aurinegro.

Anything out of the relegation places would be a great achievement for Olimpo but it is difficult to see where the sufficient number of points is going to come from. Finished third in the Nacional B and are probably weaker than their other two promoted rivals.

There you have it, a little bit on the newcomers. Good luck to all 3 sides as they kick off on Sunday.