Celtic booked their place in the Champions League third qualifying round ever so comfortably at Parkhead on Tuesday night.

The second leg was always going to be a foregone conclusion as the Scottish side had the three-goal advantage over the Northern Irish champions from the first leg in Belfast last week and of course, the vital away goals.

Celtic named an un-changed side from last week’s encounter meaning want-away striker Gary Hooper and new signings Amido Balde and Steven Mouyokolo had to be content with places on the bench.

It only took Celtic a mere sixteen minutes to break down the Cliftonville rear-guard, a bullet header from Nigerian Efe Ambrose made sure any fears of the most unlikely of comebacks where put firmly to bed early on. That was only the beginning of the Celtic barrage of attack on Devilin’s goal, Samaras came close only for Devlin to dive low and foil the big Greek. It looked like the roof was going to cave in for the part-timers at this point, Celtic again going close as young winger James Forrest hit the top of the cross-bar, the Stokes came close with a smart turn and dipping shot to be denied by Deviln, then next was captain Scott Brown who played some nice stuff with Kris Commons before his curling shot went wide of the post. Cliftonville had a few chances of their own, Mark Smyth had a close-range effort blocked and from the follow up midfielder Ciaran Caldwell fired wide. Their second real chance came from a Kelvin Wilson slip which allowed danger-man Liam Boyce a chance of a tap-in which was squandered.

Gary Hooper came on to replace Stokes in which will probably be his last appearance in a Celtic shirt, just a few minutes later, Celtic added to their lead when Samaras finished from a Commons cross to put the gloss on the victory, Hooper came close to a going-away goal but his effort hit the post and new signing Amido Balde almost opened his account but his headed effort went wide.

All in all it was an easy way for Celtic to start competitive action heading into the new season and the five-nil aggregate score line somewhat flattered Cliftonville, Celtic meanwhile get ready for the challenge of Swedish Champions Elfsborg in the next round. 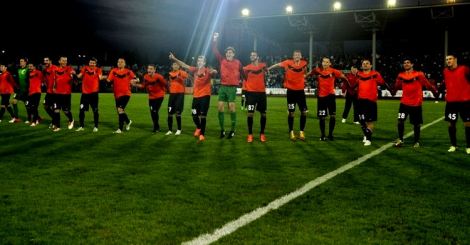 The big shock of the round came on Tuesday when BATE Borisov, the Belarusians that finished third champions Bayern Munich’s group last term, lost 1-0 at Kazakh side Shakhter Karangady, which made the Belarus side exit the competition 2-0 on aggregate.

Former European champions Steaua Bucharest progressed with a 2-1 win at Vardar to secure a 5-1 aggregate victory over the Macedonian side in Skopje. The Romanian champions will meet Georgians Dinamo Tbilisi in the third round who beat Faroe Islanders Streymur on huge 9-2 aggregate win.

Maccabi Tel Aviv will face Swiss champions and last season’s Europa League semi-finalists FC Basel by defeating Gyor 4-1 on aggregate. FH of Iceland beat Ekranas 2-1 to wrap up a 3-1 aggregate success and set up a tie with Austrian champions Austria Vienna, who like Basel enter the qualifiers in the third round.

Ole Gunnar Solskjær’s Molde beat Irish side Sligo Rovers 2-0 after a 1-0 win in Ireland thanks to goals from Martin Linnes and Aliou Coly as they aim to reach the group stage after a fourteen-year break.

Czech champions Viktoria Plzen earned a hard-fought 2-1 win at Zeljeznicar Sarajevo to go through 6-4 on aggregate and set up a tie with Estonian champions JK Nomme Kalju. Kalju celebrated their first win in Europe with goals from Yankuba Ceesay and Damiano Quintieri giving them a 2-1 win over HJK Helsinki after the first leg was goalless.

Dinamo Zagreb also advanced with a 1-0 win over CS Fola Esch thanks to Andrej Kramaric’s late penalty for a comprehensive 6-0 aggregate win and the Croatians now play FC Sheriff of Moldova.

One response to “CHAMPIONS LEAGUE: Second Round Qualifying update”