Honduras are the early group B leader after one game played as El Salvador and T & T share the points in the Red Bull Arena. Will Burns describes the action from day one in Group B. 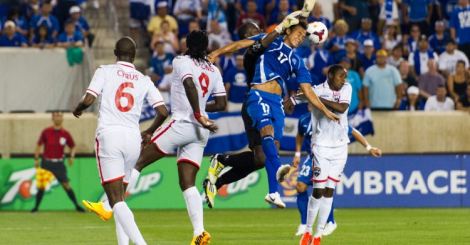 Stoke City forward Kenwyne Jones scored the 72nd minute equaliser to help Trinidad & Tobago gain a point in the 2-2 with El Salvador in the opener for both teams on Monday night. The Red Bull Arena saw an exciting contest with a great a two-goal performance by Salvadoran striker Rodolfo Zelaya, with goals from Jones and Keon Daniel cancelling out Zelaya’s efforts.

The Soca Warriors took the lead after just 10th minutes when right-winger Carlos Edwards fired the ball through to an advancing Daniel in the area. The long dreadlocked striker sprinted onto the ball past his marker and slotted it past an outstretched Dagoberto Portillo in goal to put T&T in front.

Trinidad’s lead was to be short-lived as Honduras won a free kick on the edge of the area on 21 minutes. Zelaya lifted the ball over the wall into the corner of the net past the sprawling Jan Michael Williams in goal.

The goal lit a fire under the Salvadorans and they pressed for a second. After the internal, saw more of the same with El Salvador attacking and their perseverance paid off on 68 minutes from Zelaya. The 25-year-old headed home from a beautiful cross from Darwin Ceren, who advanced down the right wing and swung a ball in.

La Azul y Blanco’s delight came to an end just moments later. Jones collected a long ball from Joevin Jones 35 yards out and he superbly turned Steve Purdy and slotted the ball well left of Portillo, who had no chance to save in the 72nd minute to salvage a draw for Trinidad.

Honduras top the group after the opening day fixtures after goals from Rony Martinez and Marvin Chavez secured a 2-0 win over Haiti.

The Hondurans grabbed the lead after just four minutes when Martinez’s thumping strike sailed past Haitian goalkeeper Frandy Montrevil after the Haiti lost possession in their defensive half and Mario Martinez set up his namesake for the opening goal.

While Haiti had the majority of thepossession and had the shot advantage over Honduras (17 shots to six) they were unable to break open the locked Honduran defence.

Honduras wrapped up victory in the 78th minute when Brayan Beckeles passed to Chavez, who slid the ball under Montrevil to double the lead and cement the three points.