It’s as you were at the top of the Thai Premier League following this weekend’s fixtures. Both Buriram United and Muang Thong United recorded away wins against Suphanburi and Army United respectively.

The match at Suphanburi attracted a crowd of just over 20,000, as the newly promoted side attempted to inflict a first defeat of the season on the league leaders. However, the north easterners survived a late rally from the home side to record a 2-1 win to maintain a five point lead over their nearest challengers.

Suphanburi’s loss meant that Chonburi’s 3-0 victory over BEC Tero, saw the Sharks leapfrog the War Elephants into third place and keep their slim hopes of winning the title for the first time since 2007, alive. Ivan Boskovic, Anucha Kitpongsri and Chakrit Buathong were on target for the Blues.

At the other end of the table, Pattaya United, under new head coach Jadet Meelap, recorded only their third win of the campaign against fellow relegation strugglers Samut Songkhram. The welcome three points moved the eastern seaboard club level with Chiang Rai United – who lost 1-0 at ToT – but they remain bottom on goal difference.

Elsewhere, there were good wins for Bangkok Glass and Osotspa to keep them both in comfortable mid table positions, whilst Bangkok United and Police United fought out a goalless draw in front of 3,120 paying customers at the Thai-Japanese Stadium in Din Daeng.

Sisaket started the league season but were suspended after playing only three matches following an appeal by Esan United, whose place they took at the end of the 2012 season. The previous year, Esan United had replaced Sisaket in the TPL when the owners moved the franchise to Ubon Ratchathani. The matter is now in the hands of the Thai courts and no announcement has yet been made as to which club will compete in the division or whether the postponed matches (15 and counting) will ever be played. 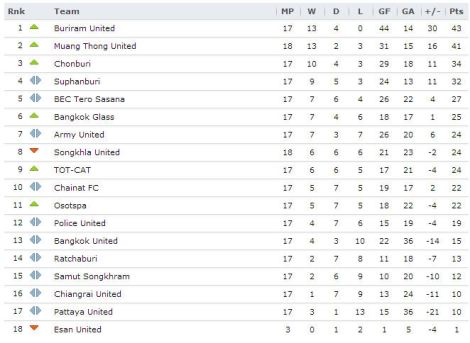