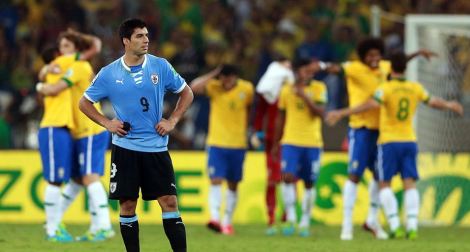 Brazil left it late to clinch a place into the final of the Confederations Cup with 2-1 victory over South American rivals Uruguay at the Estadio Mineirao.

Tottenham Hotspur target Paulinho scored with a 86th minute header to see that the Seleção defeated a resilient Uruguay side to set up a clash with Spain or Italy in the Maracana in Rio de Janeiro on Sunday night.

The in-form Fred had given Brazil a first-half lead, slicing his finish from a Neymar’s cross but the Uruguayans hit back four minutes into the second half when out-of-form Edinson Cavani took advantage of Thiago Silva’s error to strike a low shot beyond goalkeeper Julio Cesar.

Julio Cesar had earlier saved a Diego Forlan penalty mid-way through the first half after David Luiz pulled down Uruguayan captain Diego Lugano.

On the final whistle, you could see what it meant for Luiz Felipe Scolari’s side to reach the final as hosts of the competition. Or maybe the jubilation proved that Brazil never seemed to get out of second gear throughout the match, and they may have been relieved.

From the kick-off to the final kick, neither side found their fluency, as Uruguay drained the game of pace and momentum, quietening the crowd and adding to the mood of tension around the ground. That mood was changed in the 15th minute, when Uruguay were awarded a penalty after David Luiz wrestled Diego Lugano to the ground in the Brazilian box. The Brazilians surrounded Chilean referee Enrique Osses and the stadium exploded in anger. Veteran striker Forlan stepped up and took the spot-kick but Julio Cesar got down low to his left-hand side to tip the ball past the post.

After the miss, Uruguay look inspired and continued to threaten, frustrating Brazil, snapping in tackles and denying them space. Against the run of play with the half-time break in sight, Paulinho’s lofted a pass into the path of poster-boy Neymar. The Barca man forced the ball back across goal, but it was turned into the path of Fred deflecting off Lugano, and with a bit of luck, Fred mistimed the finish but it crashed against his shin and spun into the corner of the goal.

Brazil went into the break a goal to the good but when the player returned for the second half, Uruguay were soon level. Thiago Silva ended a disastrous series of mistakes by passing the ball to Cavani in the penalty area. The highly-rated Napoli striker fired a low shot beyond Julio Cesar before many Brazilians had returned to their seats, to stun Estadio Mineirao into silence for a second time.

The arrival of home-town boy Bernard elevated the crowd once more. His quick feet took him past two Uruguay defenders within minutes of his introduction only for Fred to fire high and wide when the ball finally came his way.

The Uruguayans dropped deep as Brazil moved around the flanks in search of a winner in normal time and the hosts who struck the decisive blow.

Neymar hit a corner to the back post and, as goalkeeper Fernando Muslera hesitated, Paulinho rose highest to power his header past the keeper.

Brazil held on to secure the triumph, which puts them into Sunday’s Final back at the Maracana.