Spain and Uruguay, as expected, make it through to the semi-finals of the Confederations Cup as Nigeria and Tahiti prepare to go home. Tahiti has won a lot of fans in Brazil and around the world and on Sunday featured another moment to remember for them. Will Burns and Andy Powell describes the action. 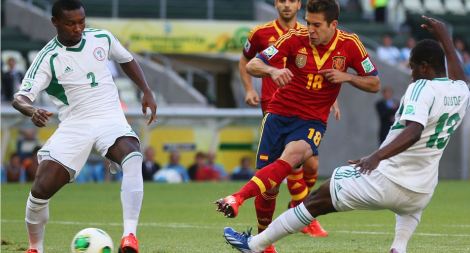 Spain eased past Nigeria winning 3 goals to nil and qualified for the semi-finals where they will face Italy in a replay of the 2012 European Championships.

Spain did not have it all their own way though, looking a little fragile in defence, a young Nigerian side who needed to win showed that they had speed on their side, cutting the Spanish open several times, but were unable to capitalise on the chances.

Spanish coach Vicente Del Bosque picked arguably his strongest 11, and it took the world champions just 3 minutes to open the scoring, when Jordi Alba rcieved a good ball from the ever reliable Andeas Iniesta, bundeled his way through a couple of half-hearted challenges before poking the ball past Nigerian keeper Vincent Enyeama. Both sides had chances to add to the score line, but good saves from both Enyeama and Victor Valdes, and big misses from both sides prevented this.

Soon after half time Nigeria’s big chance came. A clever move by the Nigerians results in Brown Ideye having an open goal at his mercy, and needing any sort of touch to level the game miss controlled the ball. Spain made them pay.

Torres, starting on the bench after scoring 4 past Tahiti, entered the game for the disappointing Soldado. Within minutes a clever Spanish move resulted in a good ball in the middle, and Torres popped up in the right place, scoring a diving header to double their lead.

Nigeria again missed a gloriuous opportunity to set the game up for a grandstand finish when substitute Mohammed Gambo sliced wide when one on one with Valdes. Then with 3 minutes left to play when a ball over the top found Alba in acres of space, rounded keeper Emyeama before slotting into an empty net, the left-backs second of the game.

Even though they were cheered with every touch of the ball, Tahiti once again tasted a heavy defeat, this time at the hands of Uruguay. However, the moment that goalkeeper Gilbert Meriel saved Andres Scotti’s penalty kick on 49 minutes will be a moment treasured by the small Polynesian Islands team.

Helped by Abel Hernandez’s four goals, Uruguay scored eight to advance to the semi-finals to face hosts Brazil as the second-placed team from Group B.

Hernandez, began the scoring in the second minute, notching the fastest-ever goal in Confederations Cup history as he got his name on the score sheet at one minute, 19 seconds.

The Palermo striker scored his second in the 24th minute to double the South American’s lead. After getting around the last defender with the slightest of touches, Hernandez calmly slotted the ball past ‘keeper Meriel. Just three minutes later, the Uruguayans added a third when Diego Perez followed up his initial effort that hit the post and tapped the ball into the open goal.

Lowly Tahiti’s best chance of the half came in the 40th minute on a quick counter-attack led by Steevy Chong Hue. The striker beat goalkeeper Martin Silva but his last touch let him down as the ball went out of play before he could play his colleague in.

Hernandez then completed his first-half treble on the stroke of half-time with a well-placed shot into the lower corner of Muriel’s goal.

Four minutes after the restart, Marama Vallar was cautioned for pulling down Matias Aguirregaray inside Tahiti’s area, but the Arena Pernambuco erupted into applause when Meriel stopped Andres Scotti’s penalty with a brilliant diving save.

Only two minutes later, Scotti was dismissed after receiving his second booking. Tahiti then enjoyed a little more of the ball with the advantage of the extra man, but they still were not able to find a way past the Uruguayan backline.

Tahiti’s numerical advantage was short-lived as Teheivarii Ludivion’s received red in the 59th minute after he picked up his second yellow. With both sides playing with ten men, Perez capitalised on the openings in Tahiti’s defence and slotted a ball to Nicolas Lodeiro who tapped in for Uruguay’s fifth goal.

Uruguay were awarded a second penalty kick in the 66th minute and Meriel wasn’t able to produce another save as Hernandez’s tallied his fourth goal of the match. Substitute Luis Suarez added a two more goals in the final moments, which now surpasses Diego Forlan as his countries all-time leading goal scorer.