Independiente Santa Fe extended their lead at the top of Group A of the Apertura championship to two points over second-placed Deportivo Cali.

It was a narrow win but the combination of Omar Perez and top scorer Wilder Medina was the difference between the sides as Wilson Gutiérrez’s Santa Fe defeated Once Caldas 1-0 in round three of games.

The only goal of the game was scored by Medina in the 31st minute with his twelfth goal of the season. Perez lofted a pinpoint ball forward and Medina tussling with Camilo Ceballos, got in front of the defender and hit the ball first time, calmly volleying past goalkeeper José Cuadrado.

Once Caldas are now rooted bottom of the group and with just one point it’s now looking highly unlikely that they can qualify for the next stage. 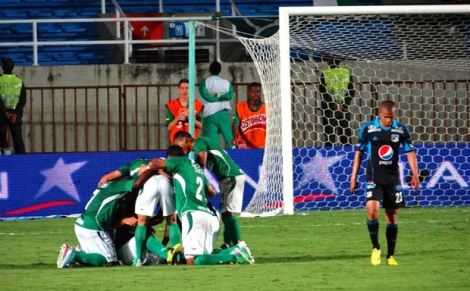 Andrés Pérez scored the wonderful goal to give his side all three points on 27 minutes. Some nice build-up play by the hosts fed the ball to Pérez just inside the box. Although, surrounded by two defender and having his back to goal, Pérez spun, shot and buried the ball into the far left corner of Luis Delgado’s goal.

These two will meet again on Wednesday in Bogata and Millos know that they need to start picking up points and quick to stay in the competition.

Group B in the Liga Postobon Apertura was blown wide open on Sunday evening when Deportivo Pasto shocked Itagui, coming off a great win in midweek against Nacional.

The home side travelled and defeated the favoured Ateltico Nacional on Thursday but failed to overcome a resilient but unfavoured Pasto side, losing out 3-2 on Sunday evening.

The visitors took the lead after 18 minutes with a beautiful free-kick. Frank Pacheco was the scorer, lifting the ball perfectly over the wall and dipping it past goalkeeper Arled Cadavid and defender Felipe Correa on the line.

The goal lit a fire under Itagui and they were level on 30 minutes with some great one touch play to set-up Nelson Barahona for the equaliser. Luis Quiñones and Jorge Andres Aguirre linked up beautifully to play Barahona into the box, and the striker finished the move with a cool finish past Lucero Alvarez.

Itagui pressed for a second but they fell behind again just seven minutes later this time though a Juan Vélez goal. The team in gold failed to clear their lines and the ball fell to Vélez who made no mistake.

The hosts did not let up and searched for another leveller, but their hopes were dashed on 53 minutes when Jhonny Vásquez was shown the red card.

The ten-men found themselves two goals down four minutes later, courtesy of a delightful bit of skill from Mauricio Mina Quintero. Recieving a long ball, he controlled it a deft touch and then chipped the ball over the on-rushing Cadavid to make it 3-1.

On 76 minutes, Itagui was given a lifeline when Pasto were down to ten-men. Álvarez fouled Luis Quinonez in the area and the referee pointed to spot and dismissed the goalkeeper. Correa stepped up and converted the spot-kick. That is how the game finished even though Itagui used high pressure to try and force the draw.

These two will meet again in Round Four of the matches in this group on Sunday, with Pasto hosting Itagui.

Nacional came back from a goal down to defeat Tolima on Sunday night to keep their Colombian Championship hopes alive.

Nacional suffered a real blow to their chances in the game when the impressive playmaker Macnelly Torres has to be carted off with an injury and replaced by Wilder Guisao. It was later announced that Torres had suffered a problem with his ankle and news of this injury would be released later this week.

After a goalless first-half, Tolima took the lead against the run of the play, three minutes after the interval in a match which Nacional had dominated the possession so far. It was a textbook counter-attack, with a ball coming from midfield to use the speed of striker Charles Monsalvo down the right wing. Monsalvo fired a ball into the box and captain Andrés Andradewas on hand to head home. Replays showed after the goal that there had been a suspicion of offside that the assistant referee had missed.

Under-fire Nacional coach Juan Carlos Osorio, made a desperate decision at a desperate time. Right-back Steffan Medina was pushed into the attacking right-wing role with Francisco Najera dropping back. Within minutes his team was level.

Some great midfield work by Sherman Cardenas fed Juan David Valencia towards goal on the edge of the box. Valencia hit a powerful left footed blast towards goal that surpassed Antony Silva in the Tolima goal.

Tolima defended and settle for a respectable draw but the visitors were not finished and they sent their travelling supporters home happy.

Jhon Valoy surged past defenders down the left and played in Valencia who whipped in a pin-point cross for the rising Jefferson Duque to powerfully head home with just five minutes remaining. While scoring Duque fell awkwardly after connecting with the header and had also had to be carted off.

It will be a blow if both Torres and Duque are missing for Nacional when they host Tolima this weekend in the  fourth round of fixtures.