It was a case of goals galore in the opening day of the FIFA Under-20 World Cup in Turkey on Friday. Andy Powell and Will Burns are here to review the action on the tournament’s curtain raiser. 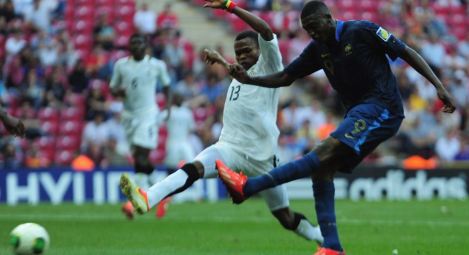 France secured an easy win in their first game in the U20 World Cup, defeating 2009 champions Ghana. The game started openly with Ghana looking to gain an early advantage, and an early chance was deflected away from the foot of Ebenezer Assifuah who would of scored. The game settled into a rhythm soon after and it took until the 31st minute for a noteworthy chance, a series of passes by France opened it up for Geoffrey Kondogbia but a deflection took the ball wide. France, starting with arguably their best U20 players, controlled much of the game, with Ghana looking dangerous on the break.

The game was much of the same until the 66th minute when Kondogbia headed home a long throuw from Lucas Digne. Soon after it was 2, as Yaya Sanogo cooly placed a shot past the Ghanaian keeper. The goal, plus a couple of substitutions seemed to inspire Ghana and they came into the match a little more. However they were hit with a sucker punch when Jean-Christophe Bahebeck finished off a neat counter in off the post. Richmond Boakye-Yiadom scored a simple tap in but Ghana could not press home and put France under further pressure and the game finished 3 – 1 to France. Ghana will now struggle to qualify from the group with matches against U19 UEFA champions Spain and USA left – ANDY POWELL 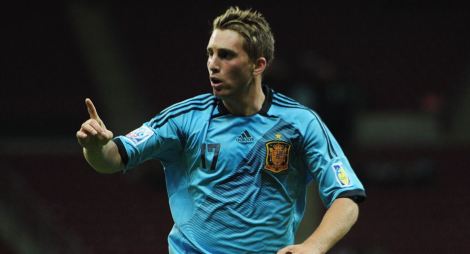 The Spanish opened the scoring early on 5 minutes when Barca midfielder Deulofeu fired a shot across the goal mouth and Real Madrid striker Jese volleyed the ball into the net. The Americans could have levelled in the 13th minute but Monterrey striker Joaquin Hernandez missed an open goal and shot wide and although the US controlled the possession for the next 15 minutes, they could only contain Spain’s strikers for so long.

The lead was doubled on 42 minutes, the impressive Deulofeu received the ball outside the area, sidestepped US captain Caleb Stanko and sent a wonderful curling effort beyond the powerless Cody Cropper, just inside the right-hand post. The reigning European champions caught the US defence asleep just two minutes later and Tab Ramos’ team went into the break three goals down. Javier Manquillo, worked hard down the left, made a great run and cut inside for Jese, who was lurking in the area, and placed the ball home for his second goal.

Feeling they had already won the game, Spain seemed to content to sit back for much of the second half, but again the Spanish counter attack paid dividends. Within 15 minutes of the restart, Deulofeu beat the offside trap and received a wonderful through ball from Liverpool’s attacking midfielder Suso. The Barca collected the ball and skilfully skipped around Cropper to place his second goal into the empty net.

Spain were to denied a clean sheet after a stunning strike from Luis Gil. Latching onto a loose ball after a defensive mistake, the Real Salt Lake man twisted and turned to work himself into some space 25 yards from goal. Gil hit a shot that could provide an early candidate for goal of the tournament with a stunning left-footer straight into the top right-hand corner – WILL BURNS

Despite Cuba taking an early lead through a Maykel Alejandro Reyes goal, South Korea fought from behind to grab a late winner.

Reyes scored within the after 7 minutes thanks to clever build up play by Hector Morales. Cuba were unlucky not to double their lead 12 minutes later, hitting the woodwork. The game fell into a bit of a lull after this, but South Korea eventually found their feet with half time closing in, putting Cuba under constant pressure.

Following the half-time interval, South Korea picked up the pace and found themselves with the chance of levelling after referee Cuneyt Cakir awarded a penalty. Kwon Changhoon stepped up to the spot to hammer the ball into the back of the net in the 51st minute to leave it all square with 40 minutes left to play. Korea dominated the remainder of the second half, and their work paid off as Kang Sangwoo fed the ball to Ryu Seungwoo, who knocked the ball into the net to give his side maximum points – ANDY POWELL

Portugal were victorious in their Group B opener in a exciting 3-2 win over a resilient Nigerian side in Kayseri. A double from Nigerian captain Abdul Ajagun, after being two goals down at half-time, was not enough for the African side, as a brace from Sporting Lisbon winger Bruma, either side of Aladje’s strike earned Portugal the win.

After a slow start, the Portuguese began to make the best of the running. The dangerous Bruma saw an early sight of goal open up, but his wayward effort did not trouble goalkeeper Chukwunenye Okani. The Flying Eagles made their way back into the game but it was still Portugal that went even closer to opening the scoring. A whipping cross by Joao Cancelo found Aladje, but his stretched effort sneaked wide of the goal.

The Portuguese pressure finally told soon after and it was that Bruma made no mistake this time, slotting confidently past Okani following a smooth pass from playmaking captain Joao Mario.

The Italian-based striker Aladje doubled the lead just minutes later. The exciting Bruma was again causing trouble for the Nigerian defence and found himself in space on the left, and when Okani could only palm his shot, F.C. Aprilia’s Aladje was more than happy to tap into the empty goal.

While the Africans had their chances to grab a goal back before the break, none were better than Abdul Ajagun’s two efforts from close range, forcing José Sá into a stunning double save right on the stroke of half-time. After the interval, the Nigerians looked keen to reduce the deficit, and they did just that on the hour mark. A inspirational through-ball from Olarenwaju Kayode found captain Ajagun, who this time beat the Maritimo goalkeeper with a skilful lofting dink into the goal.

Ajagun then drew Nigeria level with another goal of the tournament contender. A deep corner found the Dolphins FC striker unmarked in the penalty area, where he superbly brought down the ball with his first touch and sublimely arched it into the far corner of Sá’s goal.

More like a NBA basketball game due to its end-to-end nature, Nigeria’s joy after the second goal was short-lived. It was that man again, Bruma getting his second of the game less than two minutes later, after Ricardo Esgaio’s through ball, slotting inside the near post from the edge of the area with a cool, confident finish. Bruma will be one to watch for the future in this tournament and beyond.

Ajagun had the chance to bag his hat-trick ten minutes from time and clinch a point for Nigeria, but Sá was on hand with another fine save as Portugal clung onto the victory and the three points – WILL BURNS