World Cup holders Spain outclassed the Copa America champions Uruguay on Sunday night with a dominant exhibition all the way through the ninety minutes, even though they were given a late scare by an excellent Luis Suarez free-kick.

At the beginning of the game, of course as usual the reigning World Champions dominated possession with the Uruguayans sitting rather deep and allowing La Furia Roja to control the ball in their own half. But on 4 minutes, in their first attack, Del Bosque’s men should have been in front. Jordi Alba found space down the left and whipped a ball right in front of goal by Soldado failed to stretch and reach it.

It had been a timid start from La Celeste, guilty of sitting back very deep and Spain’s midfield stretched them across the pitch and they were saved by the post just minutes later. Midfield maestro Fabregas collected the ball on the edge of the penalty area after a clever step-over by Iniesta, and hit an early shot onto goalkeeper Fernando Muslera’s right post.

Barcelona’s winger Pedro put Spain deservedly ahead in the 19th minutes with a long range deflected effort which may have gone down as an Diego Lugano own goal. Pedro hit a first time shot after the Uruguayans’ failed to clear, captain Lugano stuck a leg out and swayed the ball out of the ‘keepers reach.

The South American’s began to get aggravated and the game started getting towards boiling point midway through the first-half. Edison Cavani was booked after catching Sergio Ramos with an arm across the face while jumping for a loose ball. Jordi Alba caught an elbow to the face from Cristian Rodriguez but Japanese referee Yuichi Nishimura missed that one and the foul went unpunished, the goal had certainly lit a fire under Óscar Tabárez’s men.

The blaze was extinguished just after the half-hour, a crisp finish from Soldado doubled the Spanish lead. A piece of incredible vision from Fabregas split the Uruguayan defence wide open and played the Valencia striker in. Soldado kept his composure and calmly placed the ball with a exquisite finish to the goalkeeper’s left corner. The crowd started Olé-ing and the Uruguayans looked beat after just 31 minutes.

Muslera was brought back into action again on 38 minutes when his team should have been 3-0 down. A threatening low inswinging Xavi corner was met by the feet of Gerard Pique, but the Barca man stroked the ball perhaps too perfectly and it landed straight at the ‘keeper. The yellow cards were coming thick and fast before half-time. Soldado made the most of Lugano raising an arm against him the referee was fooled and dished out the booking.

The half-time whistle went and it had been a bit of a masterclass from the Spanish and anyone witnessing the game could see only one winner, but Uruguay had the opportunity to pick themselves up at the break. Tabárez brought off the ineffective Gaston Ramirez for Lazio’s winger Alvaro Gonzalez.

The second began with Del Bosque’s men started passing around but Uruguay charged down the ball at every opportunity but to no avail. Spain used their great technique and one touch passing to provide some great link up play by Soldado and Fabregas and nearly scored a third five minutes into the second period. This time Pedro latched on to a loose ball to the right of the box and zipped a teasing cross along the goal. Soldado stretches out to try and get a toe on it, but the ball evaded everyone and went out of play.

As the match slowed down and Spain controlled the tempo, the Uruguayans looked jaded and had really failed to impress in attack. The capable duo of Edison Cavani and Suarez did not get into the game and stamp their authority on the match at all. Regarding the Liverpool man, although he showed few fleeting moments of skill, Iker Casillas in the Spanish goal was rarely tested. Every pressing moment in the Spanish half looked rushed, and the players seemed doubtful that they would lose the ball back every time, which in essence they did.

Tabárez was aware he had to make a positive change, so he made two. With roughly twenty minutes to go he took a midfielder (Walter Gargano) and defender (Diego Perez) off and replaced them with Brazilian-based forwards Nicolas Lodeiro and Diego Forlan.

On 72 minutes, Lodeiro was challenge by the double feet of Sergio Ramos but the lenient Nishimura did not even book the Real Madrid defender. The veteran Forlan took the resulting free-kick but it flew over the bar and yet again, failed to warm the gloves of Casillas. 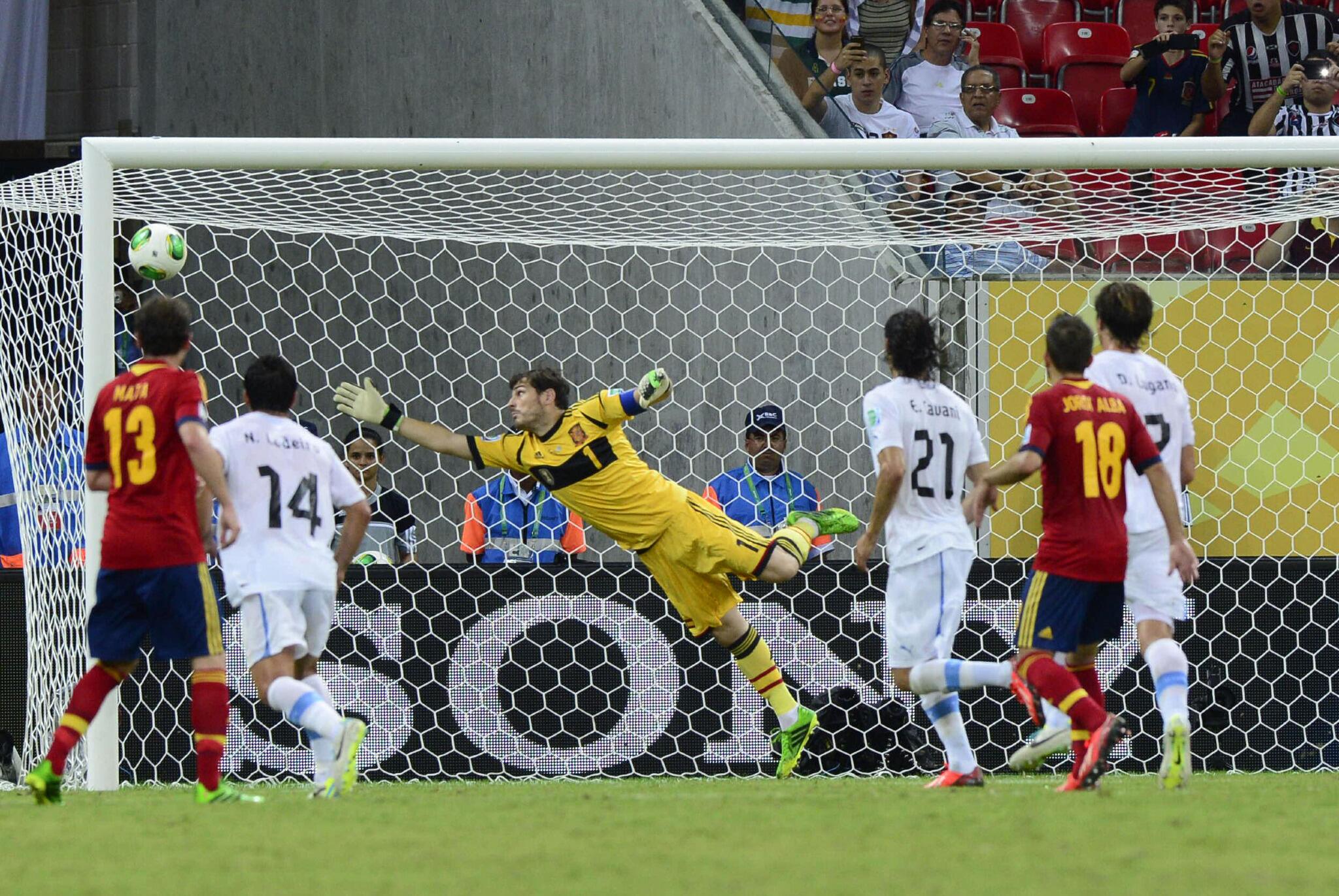 The influx of attackers by Tabárez failed to materialised any chances until the 87th minute when a bit of magic from Suarez got the crowd on their feet. Sergio Ramos dished out a rash challenge on the striker and he stepped up to curl the free-kick from around 35 yards past Casillas in the top right corner of his goal. A sublime free-kick that came too late in the game to change the result.

Uruguay will face Nigeria on Thursday evening as Spain will look to notch a cricket score against lowly Tahiti a few hours earlier.