Copa Libertadores quarter-finalists Santa Fe still remain top of the table heading into next week’s final set of fixtures with Nacional and Itagüí breathing down the leaders necks. All eight teams have now clinched their places into the next round of the Apertura championships with Cucuta and Junior just missing out failing to win this past weekend.

Not even playing a weakened side, ahead of Tuesday night’s Copa Libertadores quarter-final second leg, let Cúcuta grab a win against table toppers Santa Fe on Saturday night. A double by Cristian Martínez Borja helped the hosts on their way until the visitors made the fight back. Henry Hernández and Damián Malrechauffe thought they had grabbed a point which would have helped Cucuta’s fight for a top eight berth. But sadly hope of a semi-final finish disappeared when defender Jairo Andrés Suárez hit home with just six minutes to go.

Nacional stay third hoping the top two can slip up on the final round with a 1-0 over fellow qualifiers Deportivo Pasto thanks to a goal from a wonderful John Pajoy free-kick. 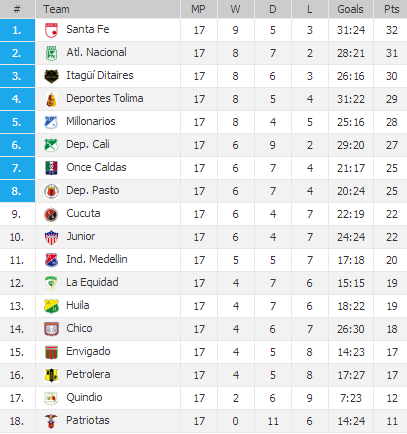