Victor Cortes continued his great goalscoring form to keep Itagüí in the chasing pack for the Apertura title with a 1-0 win over La Equidad on Saturday. The instinct of Cortes was in display pouncing on half a chance just after the break. The Equidad defence failed to clear a cross from the left and Cortes volleyed past goalkeeper Diego Novoa for the victory. The hosts now sit on 23 points in second position with Equidad linger in 14th with thirteen points.

Santa Fe manager Wilson Gutierrez was clear in midweek that his team could not give up any more points at home, and that Saturday’s match against Envigado win was imperative in order to challenge for the Apertura title. His team took note and defeated Envigado by the single goal to turn around a poor week after suffering a loss to Tolima. It was the ninth goal of the season for Wilder Medina that sealed the 1-0 win after just 20 minutes of play that fired his team up to the top of the standings. Medina hammered a powerful header past Víctor Hugo Soto in the Envigado goal from a Omar Pérez swinging free-kick.

Last years champions Millonarios again played poorly and are now four games without a win, just taking one point for the last possible twelve. Sadly for their opponents Quindio the same pattern is following themselves as they struggle to find a win and sit propping the league up with only eight points from the 13 games.

Even though they were down to ten men just before half time, Boyacá Chicó pulled out an important 1-0 win away to Cúcuta on Sunday.  Elvis Perlaza recieved a red card after only 42 minutes and it was the home team that had the better of the game until Juan Pérez scored just after an hour.

Cali missed a chance to jump into second place and in all fairness they were lucky to escape with a point. The on-fire Edison Toloza grabbed a double for Junior to take his tally to nine for the season but it was Cali that took the lead. When Junior failed to clear their lines, the ball fell to Carlos Lizarazo on the edge of the box after 26 minutes, he hit first time and nearly broke the net. The joy for Cali manager Leonel Alvarez did not last very long as Junior fought back and were level within four minutes. Toloza from the right wing took on two defenders and whipped in a cross for striker Dayro Moreno, but the ball missed the striker and goalkeeper Faryd Mondragon and spun straight into the net.

It was not until the 68th minute when Junior took the lead, Toloza smashing home a spot kick after Nery Bariero fouled Vladimir Hernández. This time it was the turn of Cali to grab a goal back just a few minutes later with Andrés Escobar hitting an awesome strike past Sebastián Viera.

Now in sixth, Cali travel to Tolima on Saturday in an important clash and Junior sit in ninth.

Tolima blushes were saved by a late Danovis Banguero equaliser away to second from bottom Patriotas in Sunday’s 1-1 draw. Tolima dominated the play early on but Patriotas took a shock lead from a corner. Los Boyacenses charged the corner and striker Alejandro Gonzalez was unmarked in the heart of the area and headed the ball to beat Anthony Silva, who was powerless in trying to stop it. Tolima pressed and pressed and deserved the draw they finally earned in injury time. After some great work from Jimmy Chara, he played in Banguero down the left the edge of the local area smashed the leveller home. A goal that silenced the few fans who came to the stadium’s Independence Tunja.

Another team with a late leveller to save their blushes were Pasto who travelled to Petrolera on Sunday evening. Within 20 seconds of the second half, Alianza managed to open the scoring. The pacy Juan Guillermo Arboleda drove into the oppositions box and managed to evade the opposing defenders to cut back to Michael Rangel who calmly finished the move. Pasto attacked and eventually grabbed a 91st minute lifeline from Juan Guillermo Velez.

It was the game of the weekend between rivals Nacional and ten-man Medellin, and they did not disappoint in the 276th El Clásico Antioqueño. The visitors had a lost defender Jefferson Mena with two bookings within five minutes, he received his second after just 19 minutes. The ten-men took the lead and in style, possibly the best goal of the weekend. John Viáfara smashed home a around 35 metre free-kick past Cristian Bonilla, check the highlights below for that one.

Nacional failed to find the breakthrough and after the break they found themselves two goals down. The second goal was virtually a carbon copy of the first except Viáfara’s long range free-kick shot was deflected in by Argentinian Germán Cano, 2-0.

The home team needed to regroup and in the 65th minute, they had a lifeline. A short corner was taken and Jefferson Duque headed home a pinpoint cross from Sherman Cardenas. El Verde pressed Medellín into their own half and they found a new hero on 72 minutes.

It was 20 year-old John Stefan Medina, a childhood Nacional fan with his heart in the feet, that was the key element in the attack for Juan Carlos Osorio. The right-back attacked the wing throughout and reaped the rewards in the 72th minute scoring the equaliser. Medina, naturally a centre-back, excelled in the role of the attacking full-back and showed tremendous ability playing the ball.

Medina, who now wears the number two, may be as popular as another man who once donned that shirt… the late, great Andres Escobar. Cries from the Colombian public will be hoping he will be wearing that shirt for Jose Pekerman’s national team.

The final game of the exciting weekend ended with Once Caldas climbing up to third place with a win away to Huila. Edwards Jimenez got the only goal for the vistors which wasa their first win in ten years in the Estadio Guillermo Plazas Alcid de Neiva. 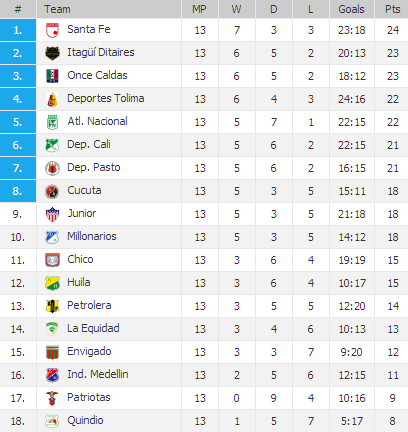