Shakhtar Donetsk must wait until next week to secure the league title after they were held to a draw in Dnipropetrovsk, while both Metalist and Dynamo secured victories in their race for the final Champions League spot.

Three time defending champions Shakhtar Donetsk were set to be crowned champions in the 25th round of Ukrainian Premier League action, but Dnipro, themselves desperate for points to keep up with their rivals in the race for 2nd place, postponed the coronation and earned a share of the spoils. Dnipro manager Juande Ramos said before the match that his team would do all it could to ensure that the Hirnyky would be forced to celebrate their title elsewhere and at a different time, and his side lived up to his promise.  Dnipro were gifted the lead in the 13th minute after a disastrous mistake by Shakhtar goalkeeper Anton Kanibolotskiy. After a receiving a back pass Kanibolotskiy, instead of simply clearing the ball, tried to dribble away from the onrushing Matheus, but the Brazilian striker managed to steal the ball away and poke it into an empty net to give the home side the advantage.  Throughout the first half Dnipro frustrated the visitors with their relentless pressing and deservedly went into halftime with the lead.  Mircea Lucescu by making two changes ten minutes after half time, bringing in Ravzan Rat and Taison for Shevchuk and Eduardo, respectively.  The substitutions changed the complexion of the match, and Shakhtar in general looked more proactive and dangerous in the second period of play.  They were rewarded for their efforts in the 61st, when Darijo Srna equalized from the penalty spot after Fernandinho was brought down in the box.  Shakhtar were the better side for the remainder of the match but were unable to find a winner, postponing their inevitable fourth successive league title celebration.  Dnipro will be pleased to become just the second side to take points from Shakhtar all season long, but at the same two dropped points at this crucial stage of the season will do them no favors in their battle for 2nd spot.  They have now fallen six points off the pace of 2nd place Metalist.

Dynamo Kyiv put in their most impressive performance thus far under new manager Oleh Blokhin in a 5-0 demolition of Zorya Luhansk on Saturday night.  Zorya actually got off to the better start in the match and threatened Maksym Koval’s goal several times in the opening ten minutes.  But Dynamo quickly settled down and began to assert their dominance through the dual threat of Ideye Brown and Andriy Yarmolenko.  The two combined for the opener in the 28th minute; Brown beat his defender and sent a low cross into the area, where an unmarked Yarmolenko beat Zorya keeper Krsevan Santini from close range.  Ten minutes later Brown doubled the lead, this time with a solo effort.  Oleh Husyev found the Brown with an accurate long ball, and the Nigerian striker expertly cut inside and sent the ball past the keeper.  Brown scored again in the second half, putting the ball into an empty net from a Roman Bezus assist.  Bezus got on the scoresheet himself in the 88th minute with a fantastic long range effort that left Santini rooted to the spot, and Husyev made it 5-0 with a stoppage time penalty.  The thoroughly dominant victory is sure to send a message to Dynamo’s rivals for 2nd place; with the victory Dynamo remain just two points adrift of Metalist for the last Champions League spot.

Metalist Kharkiv remain in pole position for Champions League football next season following a 3-1 home victory over Chornomorets Odessa.  Chornomorets are in their own battle for European football; coming into this match Chornomorets were in 5th place, the last Europa League spot.  The Odessa club took the lead in the 27th minute; Metalist goalkeeper Vladimir Disljenkovic’s poor clearance fell right to Lucian Burdujan, whose accurate volley gave the visitors the lead.  It would prove to be very short-lived, however.  On the ensuing kickoff, as some Chornomorets players were still celebrating and their goalkeeper was still sprinting to get back into position, Cleiton Xavier’s shot directly from the centre circle sailed over the keeper’s head!  Metalist then took the lead in the 52nd minute.  Jose Sosa was put through on goal following a brilliant 1-2 exchange with Marlos and neatly tucked away the ball into the near post.  Xavier then put the result out of reach ten minutes later as he rose to head in a corner past goalkeeper Dmytro Bezotosnyi.  Metalist remain two clear of Dynamo in 2nd, while Chornomorets’s defeat sees them drop out of the European spots into 6th.

Chornomorets’s Europa League spot was at least temporarily claimed by Metalurh Donetsk, who defeated Hoverla Uzhhorod 2-1 at home.  Hoverla were on their best spell of form of the season, having taken 7 points in their last three matches in their desperate attempt to escape the relegation zone.  Hoverla got off to a good start in this encounter and took the lead early on.  Arthur Yedigaryan’s long ball released Damien Le Tallec, whose square ball left Jordi Lopez with the easiest of finishes.  But Metalurh turned it around in the 2nd half.  Mykola Morozyuk’s 50th minute free kick left into the upper 90 goalkeeper Dmytro Babenko with absolutely no chance.  Seven minutes later the home side took the lead.  Constantinos Makrides’s brilliant inswinging cross with the outside of his foot found Velizar Dimitrov at the back post.  Dimitrov’s volley toward the back post once again left Babenko helpless.  With the victory Metalurh leapfrog Chornomorets into 5th spot, while Hoverla’s defeat leaves them five points adrift of safety.

In Friday’s only match Illichivets Mariupol’ defeated Vorskla Poltava 1-0 to keep their hopes of a Europa League spot alive.  The only goal in the match came from a set piece in the 64th minute.  Oleksiy Polyanski’s crossed free kick was misjudged by Vorskla keeper Serhiy Dolhanskiy.  Dolhanskiy came out to claim the ball but was beaten to it by Oleksandr Manzyuk, whose header sailed into the unguarded net.  With the victory Illichivets remain three points behind Metalurh and still harbor ambitions of playing in the continental tournaments next season.  Vorskla, meanwhile, are mired in 12th place.

Tavriya Simferopol extended Volyn Lutsk’s winless streak to eight matches with a 3-0 home victory.  The Crimean side took the lead 10 minutes in when Oleh Humenyuk got on the end of a low cross from Makhach Gadzhiyev and tucked the ball under the crossbar from a difficult angle.  Tavriya doubled their lead at the stroke of halftime.  Former Ukrainian national team midfielder Serhiy Nazarenko got on the end of a through ball, rounded the keeper, and put the ball into an empty net.  Tavriya made it 3-0 in second half stoppage time in a very similar fashion to their second.  This time Anton Shynder was the beneficiary of a through ball that picked apart the Volyn defense, and much like Nazarenko he went around the goalkeeper and calmly rolled the ball into the goal.  Tavriya jump ahead of Zorya into 10th place, while Volyn remain in a tie for 12th.

Kryvbas Kryvyi Rih fell to a shock 2-0 defeat to Metalurh Zaporizhia, Metalurh’s first victory of the season.  Kryvbas have been in a financial mess, and their players have not been payed in weeks.  But their monetary struggles did not have a negative impact on their performances; Kryvbas had not lost since the league resumed from its winter break in March.  Metalurh, on the other hand, have had a nightmare campaign and had not registered a single victory up until this encounter.  Captain Serhiy Rudyka gave the cellar-dwellers the lead in the 74th minute with a clever outside-of-the-boot finish past the outstretched fingertips of Yevhen Borovyk.  Rudyka doubled the host’s advantage in the 82nd minute as he got on the end of a Junior Moraes cross and finished from close range.  Kryvbas fall four points behind Metalurh Donetsk for the final Europa League spot, although it could be a moot point as there is a very real possibility of Kryvbas ceasing operations after this season.  Metalurh Zaporizhia’s victory, meanwhile means that they are not yet mathematically assured of relegation, although they need to win their remaining five matches, hope Karpaty lose all of theirs, and make up a 32 goal difference.

In Monday’s only fixture Arsenal Kyiv thrashed Karpaty Lviv 4-1 at home and snapped their eight match winless skid.  Arsenal are a team who failed to qualify for the Europa League group stages only because they fielded a suspended player, and earlier in the season they looked like one of the favorites to once again qualify for Europe.  But a terrible spell of form saw them tumble from 5th place in the standings to as low as 15th.  Their last victory came all the way back in November, when they were first team to take points from Shakhtar.  In this match, however, they simply overwhelmed Karpaty.  Volodymyr Arzhanov gave Arsenal the lead via the penalty spot in the 7th minute, and Dominic Adiyiah made it 2-0 just four minutes later, putting away a cross from Arzhanov.  Three minute from halftime the game was out of reach, as Andriy Bohdanov’s powerful free kick beat Karpaty keeper Roman Mysak.  Karpaty got a consolation in the 77th through Levan Kenia, but barely a minute later Oleksandr Romanchuk restored the hosts’ three goal advantage.  With this defeat Karpaty fail to distance themselves from the relegation zone, as they remain five points clear of Hoverla, who are in 15th place. 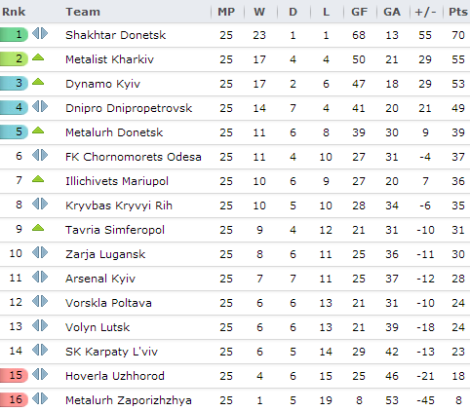