This article courtesy of Escape To Suomi

With the dawn of the new league season, it’s time for an updated fashion parade. The spring/summer 2013 line is here, and here are the models, in alphabetical order.

Tim Väyrynen stayed at the club, but so did the kit – Honka have retained the same Umbro jersey for 2013, and will be wearing it in the Europa League.

Tommi Kari is so hot right now, but the Lahti kit remains a 2012 vintage.

Shahdon Winchester has already scored several goals for his new club, and the Middlesbrough-esque outfit may yet suit him.

The returning Forssell shows a new collar, yet to be covered in sponsor logos. Will it be seen in the Champions League? 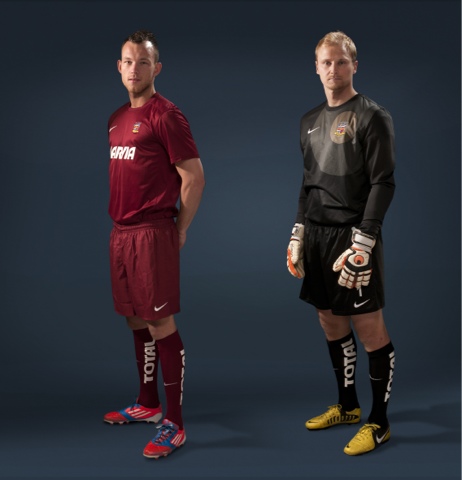 JJK’s team photos didn’t show much kit, but here it is. After a Facebook vote to move away from blue and claret stripes for 2013, this is the winner.

Dawda Bah returned to Finland this January. KuPS have changed their shirt sponsor to insurance company LähiTapiola, but the jersey remains the same Puma effort.

MYPA have changed their jersey to the same template as KuPS for 2013, as modelled by Elias Inkilä.

These are what the players will be wearing – will any become collector’s items? We know some of the British kit nerds will be judging closely.