Shakhtar Donetsk continued their sizzling domestic form and extended the gap at the top, while Dynamo Kyiv took advantage of slip-ups by Dnipro and Metalist Kharkiv and leapfrogged their rivals to take sole possession of second place.

Shakhtar beat Karpaty Lviv 2-1 on the road in a match that ended with just 19 men on the pitch.  The visitors took the lead in the 32nd minute.  Taison found Vyacheslav Shevchuk with a through ball, whose low cross was neatly tucked away by Alex Teixeira.  The hosts equalized in the 44th minute through a corner.  Shakhtar goalkeeper Anton Kanibolitskiy misjudged the ball, and Karpaty Mykola Zhovtyuk was there to dispatch the loose ball into the net.  Shakhtar restored their advantage in the dying seconds of first half stoppage time, as Yaroslav Rakitskiy put away a corner from Vasyl Kobin.  In a heated second half Karpaty were reduced to ten men on 70 minutes after Zhovtyuk’s last ditch tackle on Luiz Adriano prevented a clear goalscoring opportunity.  Eleven minutes later Karpaty were left with nine men on the pitch following Murtaz Daushvili’s harsh second yellow for a hand ball.  Immediately following the incident the referee temporarily stopped the match due to crowd trouble, but after an appeal for calm from Karpaty manager Nikolay Kostov play resumed.  As a result of the stoppage seven minutes were added to the end of the second half, and during this time Alex Teixeira managed to pick up two yellow cards.  Nine versus ten at full time, but Shakhtar picked up all three points to continue their record breaking campaign in which they have dropped points just once all season long.  The hosts, meanwhile, are mired in 13th position but look safe of the drop zone.

Dnipro Dnipropetrovsk dropped two key points in the race for Champions League football after they were unable to record a victory away at Volyn Lutsk.  The match was full of controversy and saw three players sent off.  Dnipro defender Douglas was saw red for a last ditch tackle on Volyn’s Dušan Savić.  Replays suggested that Savić embellished the contact, but the penalty was given and Romanian midfielder Eric Bicfalvi left Dnipro goalkeeper Jan Laštůvka with no chance to give the hosts the lead..  Dnipro equalized in first half stoppage time.  Matheus’s strike was blocked by Volyn defender Jan Maslo, but the ball fell straight to Giuliano, who beat Maksym Startsev to make the score 1-1.  In the second half Volyn had two players sent off; Silviu Izorvanu received his marching orders following a second yellow for a blatant hold on Yevhen Seleznyov in the 59th minute, and 10 minutes later Vanče Šikov received a straight red for a studs up challenge against Jaba Kankava.  Despite the numerical superiority for the final 20 minutes Dnipro were unable to find a winner and fell to fourth in the table.  Volyn snapped a four match losing streak and remain in 11th place. 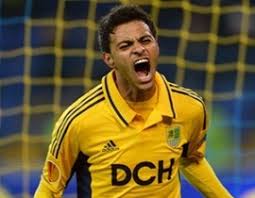 Metalist Kharkiv also failed to get all three points in their clash against Kryvbas Kryviy Rih and dropped out of the Champions League spots.  Kryvbas took the lead against the run of play in the 15th minute; Metalist’s goalkeeper Oleksandr Horiyanov was able to parry away Mladen Bartulović’s initial shot but could do nothing to stop Volodymr Pryyomov’s rebound.  Cleiton Xavier restored parity in the 56th minute with a header from a Sosa free kick.  But that was the last of the scoring for the match, and Metalist were left disappointed with the result which saw them drop one spot in the table to third.  Kryvbas, meanwhile, remain in 9th place.

The big winner of the round was undoubtedly Dynamo Kyiv.  With their 2-0 road victory over Chornomorets Odessa jumped two spots and moved into sole possession of the all-important second spot, although they are just one point ahead of third place Metalist and Dnipro are a single point behind in fourth.  Oleh Husyev took advantage of a breakdown in the Chornomorets defense and gave Dynamo the lead in the 47th minute after a one-on-one against the keeper.  Andriy Yarmolenko doubled the lead in the 72nd minute with a terrific finish to the far post after cutting inside and losing his defender.  Chornomorets remain in fifth place in the table and seem to have a firm grip on the final Europa League qualifying spot.

On the other end of the table both Hoverla Uzhhorod and Metalurh Zaporizhya look destined for relegation.  Hoverla drew 1-1 with Illichivets Mariupol but needed more, as they are now nine points away from safety with just eight matches left to play.  Metalurh are in even worse shape; following their loss to Metalurh Donetsk they are left with a miserly four points from 22 matches their relegation is all but a mathematical certainty.  In the two other fixture of Week 22 Vorskla Poltava and Zorya Luhansk played to a dull 0-0 draw.  Vorskla are third from bottom but nine points clear of the drop zone, while Zorya are in eight place.  Arsenal Kyiv snapped a four game losing streak after drawing 1-1 with Tavriya Simferopol.