Ethiopia’s chances of reaching the World Cup became a little more realistic on Sunday after beating Botswana to open a two-point gap at the top of its group in African qualifying. Ethiopia is only halfway through its games in Group A, and will still have to play a final two-legged series to have a chance of reaching Brazil even if they do win the group anyways. The 10 group winners ultimately play off for the five World Cup places available for African teams.

Still, the Ethiopians are unbeaten in three games after Getaneh Kebede’s late winner against Botswana, and have hopes of continuing their recent revival after qualifying for this year’s African Cup for the first time in decades.

Emilio Nsue hit a hat-trick and a 88th minute goal from Rincon which handed Equatorial Guinea all three points in a seven goal thriller against Cape Verde on Sunday afternoon. The scintillating match took place at the Nuevo Estadio de Malabo and saw the home side up to third in Group B with four points after their first win of their qualifying campaign.

The loss for Cape Verde sees them rooted to the bottom of the group with only one point to their name while Tunisia top the group with nine points, followed by Sierra Leone also on four points. The match in Malabo got off to a frantic start with four goals in the opening 20 minutes. Nsue opened the scoring as early as the third minute with a clinical finish before parity was restored two minutes later courtesy of Cape Verde’s Jorge Djaniny.

Still, it wasn’t long before Equatorial Guinea restored their lead, Nsue scoring his second from the penalty spot in the 17th minute. But again their lead only lasted two minutes as Platini equalised yet again for Cape Verde with a woll worked team goal. The rest of the first half seemed to filter out after the opening 20 minutes left all speechless.

The second 45 started a little slowly but sprang into life in the 76th minute when Nsue scored his third goal and gave his side the lead for the third time. However, again, Nsue saw his goal cancelled out five minutes from time when Djaniny scored his second and what he thought was the goal to earn a point for his country. But it was not to be as Ramos found the back of the net in the 88th minute to give Guinea the win and all three points.

Emerging country Tanzania thumped ten-man Morocco 3-1 to possibly end the north Africans’ hopes of reaching the finals. The victory in Dar es Salaam leaves the Tanzanians a point behind pool leaders Ivory Coast, but Morocco trail by five points and would need a major slip-up from the Elephants to catch up.

Mbwana Samata scored a brace in the second half for Tanzania, after they had been given the lead a minute into the second period by Thomas Ulimwengu. Morocco’s day went from bad to worse when Abderrahim Chakir received his marching orders with 20 minutes to play. Morocco got a late goal back through Youssef El Arabi, but it was almost the final kick of the game and there was no chance of a comeback.

Lesotho mounted a late rally to snatch a 1-1 home draw against ten-man Zambia in a dramatic clash in Maseru. The highlight of this tense match came in the 53rd minute when Zambia goalkeeper Kennedy Mweene was red carded for a challenge outside the box on striker Mojela Letsie. Letsie beat a high Zambia defensive line to pick out a poor back-pass from Stopilla Sunzu leaving Mweene with no choice but bravely stop the Lesotho striker halfway inside the visitors own area before more damage could be done.

Power Dynamos goalkeeper Joshua Titima was brought on after replacing striker Fwayo Tembo who had a modest return after a two-year hiatus from the team. However Mweene’s departure failed to kill Zambia’s resolve as they battled exorcise the ghost of 2013 AFCON in South Africa where they failed to defend their title.

Collins Mbesuma, who had tormented Lesotho throughout the game, came close to putting Zambia ahead in the 66th minute from an Isaac Chansa corner but his header hit upright and out of play. Eight minutes later, Mbeusma made no mistake from similar position again from a Chansa set piece to put Zambia ahead as the visitors looked like they were heading for a memorable away win with a man down.

However, just a minute before full-time Litsepe Marabe who had given Zambia’s defence a torrid time in the first half skipped past two defenders to smash home an unstoppable volley to deny Herve Renard’s side the three points.

Ghana closed in on leaders Zambia at the top of the Group D with a 4-0 thumping of Sudan at home on Sunday afternoon. The Black Stars ensured they are now on six points; one behind the Chipolopolo who dropped points in a 1-1 draw with Lesotho.

Mozambique and Guinea met on Sunday and drew in a game with the one point really suits neither side, with Egypt now able to tale a firm grip on the pool if they win at home to Zimbabwe on Tuesday. It was a game of few chances, but the better fell to the visitors, who will be disappointed  not to have found a winner. It moves Guinea to four points in the pool and Mozambique two. Egypt have six and that game in hand against Zimbabwe.

Mali came from behind to defeat Rwanda 2-1 in their qualifier in Kigali on Sunday. The victory moves Mali to six points and top of their pool, though they could be overtaken by either Algeria or Benin, who meet on Tuesday.

Meddy Kagere put the home side ahead in the first half and they held that lead until the break but two goals in three minutes early in the second period and Mali turned the game on its head. Mahamadou Samassa got the first and shortly afterwards Abdou Traore added a second as the Africa Cup of Nations bronze-medalists flexed their muscles. They held on for the win that keeps their Brazil hopes on track and virtually ends the slim hopes of Rwanda. 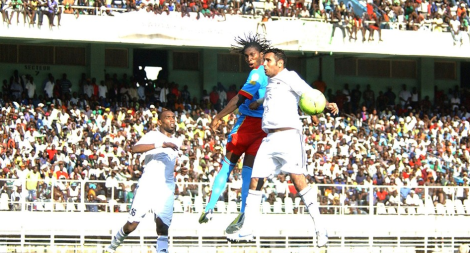 A goalless draw was the outcome as the Democratic Republic of Congo and Libya could not get a positive result which could have seen either side take the control of Group I. The Congolese Leopards could have won the match had it not been for the brilliance of Libyan goalkeeper Mohamed Nashnush who saved a penalty in the 71st minute of the match to deny the home side all three points in their Group I encounter in Kinshasa.

The DRC will certainly see the draw as two points dropped rather than a point gained as they will visit North Africa on 7 June later this year for a return match with the Libyans who were entered the weekend as group leaders.

East and Central regional champions, Uganda Cranes were handed a rude welcome in Monrovia on Sunday when they lost 2-0 to Liberia in Group J. The loss sent Uganda bottom of the group, while Liberia moved to second place behind Senegal who drew 1-1 with Angola on Saturday.

Patrick Welh gave the hosts the lead in the 36th minute, before skipper Anthony Snoti Laffor who features for Mamalodi Sundowns in the PSL made it 2-0 five minutes into the second half with a hard shot which went past Cranes goalkeeper Dennis Onyango. The hosts cheered on by the fans who filled the Stadium out played the Cranes who failed to find their flow. Tunisia based Emmanuel Okwi wasted four scoring chances for the Cranes, while substitutes Robert Ssentongo and Boban Zirintusa also failed to put away easy chances later in the second half.

Liberia goalkeeper Nahtaniel Sherman and Laffor were booked for bad fouls, while Uganda had Onyango and US based defender Henry Kalungi cautioned. Liberia’s coach Frank Jericho Nagbe made a tactical switch when he substituted the goal scorers and Tonia Tisdell for Theo Lewis, Foday Boikai and Zah Krangar, but there were no more goals.