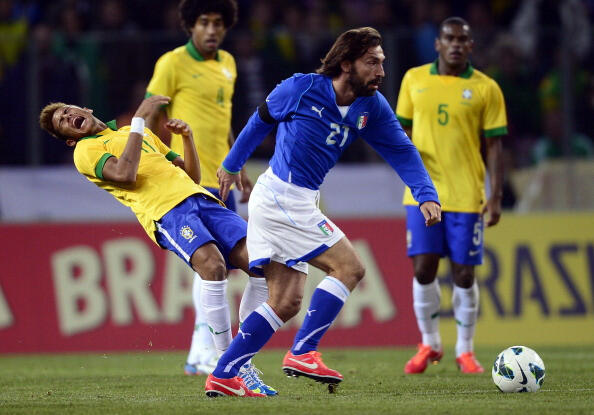 Tonight in Geneva, Switzerland… Brazil were shocked by a four minute Italian comeback capped off by a sublime goal from Mario Balotelli.

Luiz Felipe Scolari’s Selecao enjoyed a two-goal cushion at the break thanks to a fine volley from Fred at the far post and then an accomplished finish from Oscar after he was teed up by an excellent run and pass from the creative Neymar.

Italy played well throughout and produced an emphatic response, Daniele De Rossi scoring with an aerial backheel and Mario Balotelli converting a stunning effort from 25 yards as the Azzurri fought their way back into the game in stylish fashion.

With a mass of nine World Cups between them, the match was contested by two of international football’s grandest teams.  It began in entertaining fashion and with an intensity that often eludes friendlies, especially ones played on neutral turf.

It was the Italians that started the brighter and Emanuele Giaccherini had the first real chance. The Juve man cut in from the left and sprinted past Bayern Munich’s big central defender Dante to fire in a dangerous shot that Julio Cesar turned round the post with an outstretched arm. The Brazil goalkeeper had to be alert again when Balotelli ran onto a long ball over the top and took his shot early, pinging in a low effort that went wide via the keeper’s heel.

Balotelli, in good form with seven goals in only six Serie A appearances since swapping England for Italy in January, looked full of intent and went close with two further efforts, one ferocious shot being tipped round the bar and a more considered curling finish deflected wide of the post.

Cesare Prandelli’s side looked composed at the back and the more fluent in attack, but on 33 minutes Brazil punished them for a short lapse. Left sided full-back Filipe Luis delivered a cross and Leonardo Bonucci inadvertently flicked the ball to the back post for Fred (pictured below), who had lost his marker, youngster Mattia De Sciglio, to thump a volley past the helpless Gianluigi Buffon.

Neymar, who had been quiet early on, left his mark on the game in some fashion. The Santos prodigy went on a surging run from his own half and waited for the veteran Andrea Pirlo to approach before slipping in Oscar with a reverse pass. The Chelsea player’s finish was cute and Buffon was confused with a flicked finish into the bottom corner.

But if Brazil had surprisingly taken charge at the end of the first half, the Italians garbbed the momentum back at the start of the second in style.

After Milan striker Stephan El Shaarawy, on as one of two half-time substitutions for Italy, won a corner after 54 minutes with a shot from a tight angle, De Rossi pulled one back. After the ball bounced up for the Roma star with his back to goal, he pulled back his leg to flick the ball home with his heel.

If De Rossi’s goal was intelligent, Balotelli’s three minutes later was simply magnificent. Intercepting the ball 25 yards out, the striker bent in a sensational effort that flew over the gloves of Cesar and dipped under the bar in the middle of the goal to draw level.

An enthralling contest continued to produce chance after chance, with Neymar threatening with a curling free-kick and Balotelli being denied by a smart save from Cesar and then a quite brilliant block from Dante as he fired in two firm efforts from inside the box.

Neither Italy nor Brazil could score the winning goal, but a night at Stade de Geneve provided action which should go a long way to restoring the reputation of the usually boring international friendly.

See below for full video highlights…