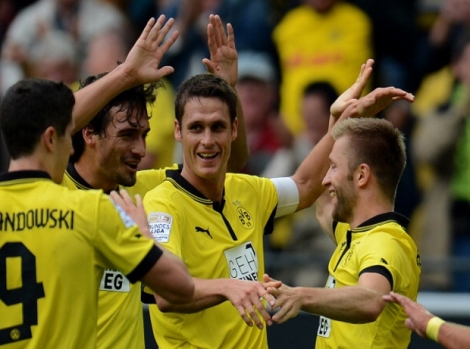 Augsburg picked up their first point of the season with a goalless draw at home to Wolfsburg on Friday night. Wolfsburg had the better of the encounter, however they were unable to break down a stubborn Augsburg defence and on the odd occasion that they were able to get through and test home keeper Mohamed Amsif he proved more than capable of keeping out their efforts.

Bayern Munich maintained their 100% record at the start of the season with a comfortable 3-1 victory over Mainz at the Allianz Arena. A goal inside 2 minutes from Mario Mandzukic set them on their way and when Bastian Schweinsteiger doubled their lead after 13 minutes many people expected a rout. Bayern continued to dominate until half time but by the break they had not added to the lead. Just before the hour mark Mainz got back into the game when Adam Szalai scored a penalty after Dante had fouled Julian Baumgartlinger. The goal didn’t alter Munich’s domination although they took until injury time before they gave the score line a more realistic look to it when Toni Kroos volleyed home after some neat play by Javi Martinez.

Nuremburg kept up their unbeaten start to the season while inflicting Gladbach’s first defeat of the campaign with a 3-2 victory. The visitors started brightly and took the lead through Timm Klose in the 17th minute. They were able to double that lead on 25 minutes when Timmy Simons scored, the assist going to the superb Hiroshi Kiyotake. Gladbach pulled goal back before half time when Luuk de Jong got his first goal for the club. In an afternoon of firsts Granit Xhaka got the equaliser, his first for the club, on 53 minutes. However, almost immediately, Kiyotake grabbed the visitor’s third goal and the goal that was ultimately to prove the winner with a run and shot that rounded off an excellent afternoon for Nuremburg and inparticular Kiyotake.

Stuttgart picked up their first point of the season in dull goalless draw with Dusseldorf who remain unbeaten and also without conceding a goal so far this campaign. The visitors were worthy of the point they picked up as both sides lacked any real creative spark to warrant more than a point from the fixture.

Hannover remains 3rd after an entertaining victory over Bremen. The hosts were two goals up inside 10 minutes as Szabolcs Huszti and Leon Andreasen both scored following some incisive play from the hosts. Bremen were not going to lie down and be beaten without a fight and Aaron Hunt got them back into the game on 26 minutes when he slotted home a penalty. The visitiors came out in the second half and deserved the equaliser they got on 74 minutes when Chelsea loanee Kevin de Bruyne scored from a pass from Eljero Elia. The hosts then survived Bremen having 2 goals disallowed and were able to take all 3 points when Huszti scored the winner deep into injury time. However is excitable celebrations earned him a double booking and a sending off for his troubles.

Schalke had a comfortable away win against a Furth side who are still looking for their first home goal in the Bundesliga following the 2-0 reverse. Schalke dominated the first half and would have gone in ahead had they not wasted some excellent opportunities. Early in the second half they took the lead through Julian Draxler and with 2 minutes remaining Lewis Holtby rounded off a very comfortable victory for the visitors.

Freiburg got the better of Hoffenheim in an 8 goal thriller on Sunday afternoon. Hoffenheim took the lead on 2 minutes through Matthieu Delpierre but the hosts struck back when Karim Guede equalised on 17 minutes and Max Kruse gave them the lead on 27 minutes and the sides went in 2-1 at the break. Hoffenheim equalised on 56 minutes when Boris Vukcevic scored. Again Freiburg took the lead through Fallou Diagne only for Hoffenheim to equalise and level things up at 3-3 on 76 minutes through Takashi Usami. However 2 goals in three minutes late on for the hosts settled things with Cedrick Makiadi and Sebastian Freis both getting on the score sheet to round off a remarkable afternoons football.

The final game of the weekend saw Frankfurt maintain their 100% record and Hamburg the unwanted 100% record of having lost all their games this season. Takashi Inui gave the hosts the lead on 13 minutes and then Canadian striker Olivier Occean doubled the lead on 18 minutes. Heiko Westermann got a goal back just before half time for Hamburg, however they were left with a mountain to climb when Petr Jiracek was sent off immediately afterwards. The hosts scored a third goal on 52 minutes when  Stefan Aigner scored and although Heung Min Son pulled a goal back for Hamburg they were not able to grab an equaliser and Frankfurt were able to hold on to continue their incredible start to the season.