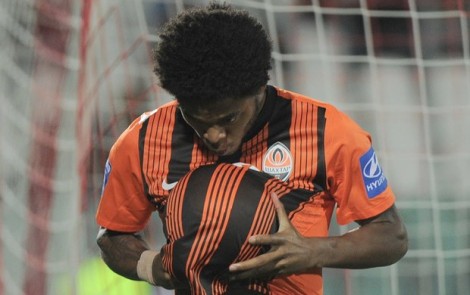 League leaders Shakhtar Donetsk continue their perfect start to the season with a 3-0 victory away at Zorya on Saturday night.  Alex Teixeira put the visitors ahead on the stroke of halftime with a close range finish after Eduardo’s shot was blocked.  Henrikh Mkhitaryan doubled their advantage in the 61st minute just two minutes after coming on as a substitute.  The Armenian midfielder already has 12 goals on the season, four more than anyone else in the league.  Four minutes later Luis Adriano secured the victory with a low strike that beat Zorya’s goalkeeper at his near post.  With nine wins out of nine and a goal difference of plus 28, Mircea Lucescu’s side look invincible.  Thus far this season, they have scored at least three goals in all but one of their league matches, and they handily defeated their main rivals Dynamo Kiev 3-1 earlier this month.

Speaking of Dynamo, the capital club remain six points behind the league leaders after a 3-1 home victory over Karpaty Lviv.  Dynamo manager Yuri Syomin has been in the hot seat recently, with some outrageous reports linking the likes of Harry Rednkapp and Marcelo Bielsa to the Dynamo bench.  But the under-fire Syomin will be pleased with this performance.  Niko Kranjcar, a big summer signing who has also been a target of criticism for his underwhelming displays, scored two second-half goals to add to Ideye Brown’s first half header.  Lucas scored a consolation for Karpaty in the 73rd minute, but at that point the match was all but out of reach.  This result will hardly take the pressure of Syomin, but will hopefully be a confidence-booster ahead of a Champions League clash against big-spenders PSG on Tuesday in Paris.

Dnipro also kept up the pace with Dynamo with a controversial 1-0 victory over Chornomorets.   Juande Ramos opted to bench striker Roman Zozulya, who started for Ukraine against England on Tuesday, in favor of Yevhen Seleznyov.  Seleznyov justified his manager’s decision by putting the hosts ahead after 15 minutes.   It stayed that way until the 74th minute, when it appeared that the visitors had equalized after Franck Djedje headed home a cross for Santana.  But the linesman, apparently having decided that the ball had gone out of bounds, disallowed the goal.  Replays showed that the ball had clearly never gone out, and Chornomorets were desperately unlucky to return to Odessa with no points.

Metalist Kharkiv thrashed Vorskla Poltava 4-0 at home, but the final score flatters the victors.  For over an hour Vorskla matched Metalist in every department.  Then, Metalist defender Denys Barvinko was sent off in the 60th minute following a second yellow.  But instead of sitting back and soaking up pressure after going down to ten men, the home side instead continued to push forward.  They were rewarded in the 64th minute, as Xavier put them ahead with a fantastic free kick.  Then, in the 75th minute, Vorskla were also reduced to ten men when Jovan Markovski received his marching orders.  Back on equal footing, Metalist put three goals past the Vorskla keeper in the final ten minutes of the match.  It was a lopsided scoreline that did not truly reflect the performances of the sides, but Metalist won’t complain as they consolidate their 4th place position.

Arsenal Kiev suffered a shock 5-0 defeat to Metalurh Donetsk in a match where everything that could go wrong for them, did.  In the 25th minute, Metalurh’s Brazilian midfielder Ze Soares was brought down in the box and his fellow countryman Junior Moraes put away the penalty to give his side the lead.  In the 34th minute Yevhen Shakhov was sent off for a second bookable offense and Arsenal were reduced to ten men.  Just four minutes later things went from bad to worse, as Arsenal suddenly found themselves two men down after George Florescu received a straight red for a rash sliding tackle.  Metalurh took full advantage of the situation and scored at will in the second half.  With the result the home side leapfrogged their visitors in the table on goal difference.

Illichivets Mariupol’ and Volyn Lutsk played out a relatively uneventful 0-0 draw on Sunday.  Chances were few and far between, and neither side really deserved all three points.

Metalurh Zaporizhya and Hoverla Uzhhorod drew 1-1 in a bottom of the table clash at Metalurh’s Slavutych-Arena.  Oleh Mishchenko gave Hoverla the lead four minutes into the match, but Adolphe Teikeu found the equalizer for the hosts in the 62nd minute.  Metalurh leave mired at the bottom with just two points from nine matches, while Hoverla are at four points, still four points from safety.

Finally, Tavriya Simferopol defeated Kryvbas 2-0 in Sunday’s late kickoff. Anton Shynder gave Tavriya the lead and Serhiy Nazarenko doubled the advantage just three minutes later.  Kryvbas were unable to get back into the match and left home pointless in what was a deserved victory for the home side.