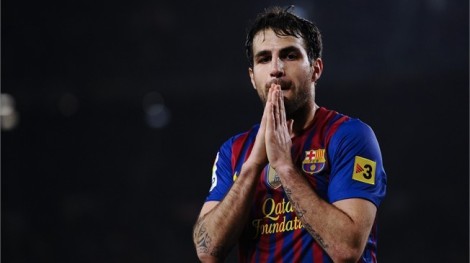 Barcelona midfielder Cesc Fabregas sparked rumours of unhappiness at his hometown club last week when he was quoted in the Spanish media with comments which sounded suspiciously like a man who was wondering about the choices he has made.

Fabregas told Marca that “There’s no such thing as a great substitute” and that he “put a happy face on” for teammates, indicating that he is far from happy with his own situation at the club.  He went on to say “I came here to compete, to learn and enjoy, not to sit racking my brains”.

In his Arsenal days, Fabregas was very much “the man” at the club and would certainly have been Arsene Wenger’s first name on his team sheet in his latter days with the club.  However, looking at the numbers and taking a look at the bigger picture it is hard to see just what else Cesc expected from his switch to Camp Nou.

When he finally joined Barca, after a much talked about and long winded transfer saga, he knew he was joining the European Champions and a team which had dominated La Liga for several years.  The lure of the club and his homecoming aside, it would take a monumental lack of foresight to see that it was going to be hard to walk right into that starting XI.

A team that could boast Xavi, Busquets, Iniesta and Messi in the midfield berths was not one which required another world-class player, but Pep Guardiola brought the diminutive Catalan home almost out of a sense of loyalty.  It felt right to have him back in the fold, to join his boyhood friends and teammates again at the elite level.  The fans greeted him warmly, like an old friend who should never have left.

Ironically he has returned to the same issues which contributed to his departure way back in 2003.  Competition for places was fierce even back then, with the youth ranks swelling and the clubs profile growing ever greater.  Promising players such as Gerard Pique and Fabregas had to get out to find the space to grow, and the teams that would offer them a real chance at the first team.  Pique took his chances at Manchester United, and when Barcelona needed strength at the back they came knocking again.  Fabregas was not so lucky – the Barca defence may have faded, but the midfield only went from strength to strength in those intervening years.

The statistics of Fabregas’ career throw a little different light on to the matter.  They clearly show that he made a strong start at Arsenal, starting 34 games for the first team in his first full year, and making an additional 12 appearances off the bench.  Compare that his first year back at Barca and you can clearly see that he started 4 more games for the defending La Liga champions and only made 10 showings from the subs bench.

In fact Fabregas started more games for Barcelona last season than he had for Arsenal since the 2007/08 season, a full 4 years ago.  His return of 15 goals is second only to his standout year in 2009/10 when he managed 19 for the Gunners.

The signs are there that Fabregas has not only settled in quite nicely at Camp Nou, he may just be reaching his peak.  At the age of 25 he has a wealth of experience and championships behind him, and has seemingly overcome the persistent injury issues which have niggled at him throughout his career.  Being surrounded by the quality and class that flows out of this Barcelona team can only help in his development.

It is perhaps understandable that a player enjoying such a time in his career would see every game as a missed opportunity when forced to watch from the bench.  However, this summer’s changes to the Spanish national team set-up should have given him yet more comfort.  Vicente del Bosque changed tactics to cope with the loss of David Villa through injury, and Fabregas found himself in the position of the “false 9”.  Throughout the Euro’s he proved that he could be effective in this role, and was also deployed in a more familiar deep role once Fernando Torres found his shooting boots.

This all bodes well for the former Gunner, showing that he can slip in and out of any line-up and adapt his game to those around him.  With a long season ahead, and knowing the chances that he was given last year, Fabregas should be brimming with confidence.  It also won’t hurt to know that Xavi, at 32, will surely move aside someday in the not too distant future and the role of Barcelona’s “main man” will be up for grabs.

Questions still remain over Fabregas’ relationship with new boss Tito Vilanova.  Outgoing Barca coach Pep Guardiola was clearly a big fan of Fabregas, and it was no secret that a young Cesc had been a huge admirer of the former club captain.  Vilanova is a different prospect however having worked with Fabregas during his time in La Masia – Barcelona’s fabled youth training set-up – he should be more than aware of his midfielder’s promise.

Vilanova was asked pre-season about his thoughts on Fabregas’s drop in form towards the end of last season, and he was full of praise for the player.  “The second year is always better,” Vilanova stated, “I am convinced he will have a great season.”

Fabregas himself moved quickly to play down any talk of unhappiness with his role at the club.  On Twitter he told his followers that he “would like to avoid any misunderstandings. I feel well, very happy with the club and I feel extremely supported by fans and the team. I just think about working and giving the best for the club and myself.”

It is a big year ahead for the Catalan club as it attempts to wrest back the league title from arch-rivals Real Madrid and mount a serious challenge to regain the Champions League title.  A cool-headed and settled Fabregas, on the bench and off it, may be just what Tito Vilanova’s side needs to provide that valuable strength in depth come May.