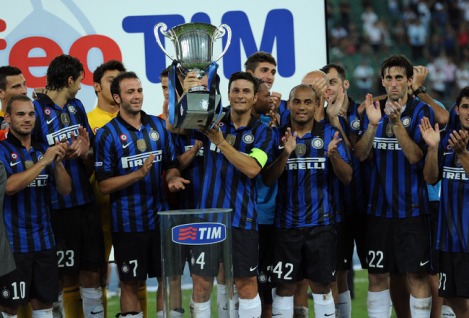 A good few years ago I thought, jackpot….a triangular pitch with 3 goals and Italy’s top 3 sides trying to out score each other!! Sadly not, but still a great spectacle hosted by the Italians each year.

The annual Trofeo see’s the teams play 3 x 45-minute matches with three points for a win or, if it’s decided on penalties, two for a victory and one for the losing side.

Inter Milan have dominated the tournament since 2001 winning it on 7 occaisions, with AC Milan winning it 3 times and Juventus with on 1 victory in 2009.

Trofeo TIM 2012 will is a benchmark for the preparation of the three teams before the start of the Serie A season 2012/13. Last year’s champion Inter Milan and Juventus will face “La Vecchia Signora” will face AC Milan and in the closing match against Inter Milan will.

Coach Andrea Stramaccioni will use this tournament to test a number of young players and new players in preparing for this season.

While Juventus Trofeo TIM trophy ambitions to seize the last time in its reach in 2009. Defender Martin Caceres and friends are very motivated to maintain a successful “I Bianconeri” last season.

For Milan, Trofeo TIM is the first test to prove the strength of the team after the residence of his 12 major players. The most surprising is moving Thiago Silva and Zlatan Ibrahimovic to Paris Saint Germain (PSG).

Silky playmaker Coutinho provided a cool finish after a Lucio bouncing ball howler which spung over his head in-front of the six yard box nicely for the waiting Coutinho.

Not a lot to get excited about in this first match as there were few chances on goal for Inter Milan after the goal, Juventus squandered chances in the final 3rd with some poor attempts on goal and poor final pass.

Rat tailed balding Zidane esque forward Palacio looks to be an impressive signing for Inter who knows the league well after a successful time at Genoa.  Plenty of positive running but no luck in front of goal in the first 45mins, he did link well with fellow countryman Milito.

Andrea Stramaccioni will be pleased with opening match victory and will remind most of a certain Mourinho with his touchline demeanour with every passing game.

The revamped Rossoneri for the second encounter at Bari’s Stadio San Nicola. There are many question marks over Milan after releasing top stars including Zlatan Ibrahimovic, Thiago Silva and Alessandro Nesta.

Vucinic went into the box and was tripped by Bakaye Traore for a penalty, although replays suggest contact was minimal. The Montenegrin striker also converted and celebrated by sucking his thumb, a reference to the fact his second child was born only two days ago.

In stoppages, Robinho’s toe-poke was deflected wide of the upright by Lucio.

Wonder-Kid Stephane El Shaarawy (@el_92) manages to steal in after a long pass from fullback Mesbah and knockdown from Kevin Prince Boateng to hit on the half volley low into the corner of the goal.

Inter equalised with a Freddy Guarin diving header from a Palacio assist from the right wing.

Palacio turned to goal scorer by latching onto a quickly taken free kick by cambiasso.  Sent clean through on goal firing across goal to the keepers right leaving him no chance from 12 yards.

A young Milan side couldn’t create much in the latter stages which were controlled by Inter Milan.

With the final whistle the title went once again to Inter Milan sealing their 8th title win and on the whole a thoroughly deserved victory.

In summary a worthwhile exercise for all parties, Milan require investment to replace the top players who have left.  Juventus look as if they will carry on from where they left off last season once the match sharpness returns and Inter literally can only improve on last seasons awful start and look to be heading in the right direction.

A Poor pitch leads to injuries….if it was Roy Keane he would have grabbed his kit and went home WC2002 style.  Bari’s pitch wasn’t suitable for playing flowing football and it showed with a number of direct passes, which Inter and Milan both scored from in the first and final games respectively.

Players getting injuries in pre-season is something all coaches expect, strains and niggles are the usual culprits.  In Bari it was Juventus who got hit hardest when Vucinic went off with a thigh problem to make way for Alessandro Matri, who has been heavily linked with a move to Milan, followed quickly by Martin Caceres stretchered off after a sprained knee, which looks to be ligament damage which is terrible news for the former Barca man.

Key men were undoubtedly Coutinho and Palacio wearing the black and blue of Internacionale!! It was a toss up between who got player of the tournament and I would have pipped for Palacio but the sponsors gave it to Coutinho….who was a worthy winner.  It could be a massive year for the young Brazilian after a loan spell in La Liga last year, safe to say he’s off to a good start.