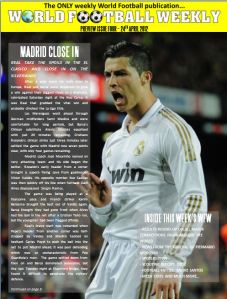 The fourth FREE preview edition of WORLD FOOTBALL WEEKLY is available to download and view NOW.

INSIDE THIS WEEK’S ISSUE
We will have an indepth look at the El Clasico and what the result meant for Real and Barca’s final games of the season.

Vasco da Gama’s dominating central defender DEDE is the second of our Scouting Reports and we get the view from some leading South American football experts.

We will cover all the news items over the past seven days including an in-depth article on the funeral of PIERMARIO MOROSINI.

Andrew Davidson puts the Spotlight on FC BASEL of Switzerland.